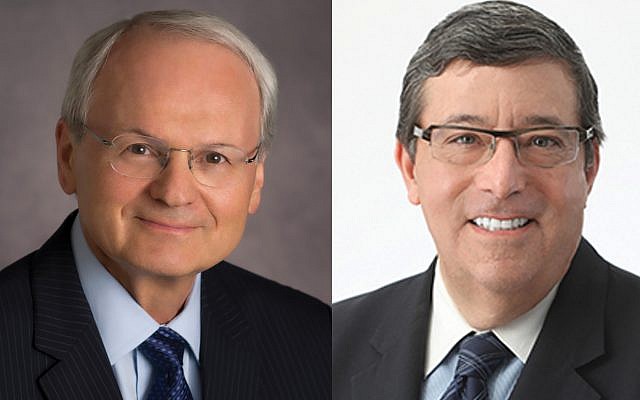 Morton A. Klein and Mark Levenson

In a time of increasingly unbridled anti-Semitism and Israel-hatred, Jewish lives are at risk. An onslaught of pro-BDS activity plagues our campuses and country. The Zionist Organization of America (ZOA) receives calls every week from Jewish students who have been physically and/or verbally attacked. Students for Justice in Palestine (SJP) rallies call for throwing Jews off their college campuses.

Members of Congress publicly support BDS, remove Israel from their office maps, call for ending all aid to Israel and accuse Jews and Israel supporters of dual loyalty. We’ve seen a rise in the media’s hostility to Israel. Tragically, a Trump-hating anti-Semite murdered 11 Jews while they were praying in a Pittsburgh synagogue. Jews have been physically attacked from New York to Los Angeles. Things are even worse in Europe. And in Israel, Arab stabbings and car-rammings and murders of innocent Jews continue. Moreover, frighteningly, anti-Semitism is more and more becoming mainstream.

Despite all this, the Conference of Presidents of Major American Jewish Organizations (the CoP) has now “warned” ZOA to cease strongly speaking out and to stop strongly criticizing Jewish groups that promote actions and policies that ZOA views as dangerous to our Jewish brothers and sisters and our beloved State of Israel. [The Jewish Week reported exclusively on the story on Jan. 11, “Presidents Conference ‘Warns’ ZOA On Tactics.”] With the serious issues facing Jews, is this what the CoP should be spending its time on? (Full report here.)

Instead of criticizing and “warning” ZOA about our strong stances, the Conference of Presidents should be praising and joining ZOA in our critical fights to defend the Jewish people.

The CoP likewise ignored our formal complaints that Ameinu absurdly and recklessly stated that ZOA’s Zionism is “violent, reactionary and anti-democratic” and that ADL demeaned and insulted ZOA by referring to us as a “once venerable organization.”

Why is the Conference of Presidents trying to muzzle, silence and restrict ZOA’s pro-Israel freedom of speech, when the CoP’s own rules permit members to “zealously advocate” and “criticize the policies and viewpoints of other member organizations and their leaders,” and state that such advocacy is “both healthy and critical to [CoP’s] mission”? ZOA zealously advocates without namecalling, demeaning insults or improper tactics.

Sadly and dangerously, some in the American Jewish establishment want ZOA to sit down and shut up. But if there ever was a time for American Jewish groups to stand up and speak up strongly, that time is now.

Especially as a child of Holocaust survivors who lost much family to Hitler’s horrors, Mort Klein fully comprehends that we dare not again become the “Sha Shtill” Jews of silence of the ’30s and ’40s, when Jewish groups were frightened appeasers who not only said little but also attacked those Jews who spoke out about the horrors Jews were experiencing.

ZOA refuses to be silent. ZOA will continue speaking the truth about the Arab/Islamist war against Israel and the West, and the dangerous rise in anti-Semitism and Israel bashing on U.S. campuses and elsewhere. ZOA will vehemently challenge positions and policies that harm or endanger our people. ZOA will never be silent. ZOA will proudly and courageously and boldly defend the Jewish people and the Jewish state of Israel.

Morton Klein is president and Mark Levenson is chairman of the Zionist Organization of America.