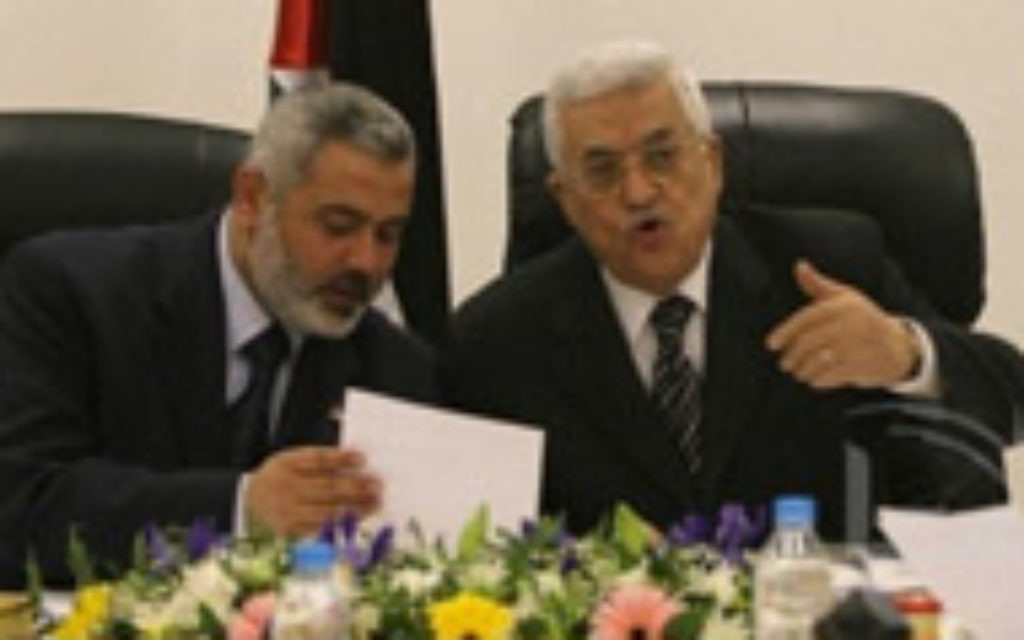 Tel Aviv — When the rival Palestinian factions, Hamas and Fatah, first signed a reconciliation agreement last May in Cairo, young political activists in Gaza went outside to celebrate.

But after Palestinian President Mahmoud Abbas and Hamas leader Khaled Meshal announced on Monday a new agreement in Qatar on the formation of an interim government to prepare the first national elections in years, there was no such public rejoicing.

“Not this time,” said a Gazan freelance journalist who asked for anonymity because she has had run-ins with Hamas officials in the past.

Drawing inspiration from the Arab Spring, the journalist last March was one of thousands of young Palestinians who organized protests in Gaza and the West Bank to pressure both Hamas and Fatah to end their rift. Nearly a year later, she says Palestinians remain frustrated at the lack of tangible progress on reconciliation, and are withholding judgment on the Qatar agreement.

“Most of the Palestinians have lost the trust in Palestinian factions,” she said. “They have had agreements in Mecca and Egypt, and nothing changed. When they signed the agreements in Cairo last May we went down to the streets, but until today we haven’t felt anything.”

Touted as a breakthrough agreement, the Qatar agreement resolves a months-long dispute over who should head the temporary government. Abbas had insisted that Prime Minister Salam Fayad, a darling of the West for spearheading Palestinian state-building, continue in the post. Hamas pushed for a prime minister from Gaza.

The compromise was that Abbas himself would preside over a government of apolitical technocrats until elections for parliament and president. The vote was originally scheduled for May, but few think it will be held on time.

In another sign of Palestinian skepticism, the agreement has spurred jokes about the number of titles held by Abbas, who is simultaneously chairman of the PLO, president of the Palestinian Authority, leader of Fatah and now prime minister.

“I don’t think they were going for a full reconciliation. This is more of a management of the separation rather than reunification,” said Nashat Aqtash, a communications professor at Bir Zeit University. “This is to show the world that Palestinians are unified. In fact nothing is going to be changed.”
Israeli security officials also share the Palestinian skepticism that Hamas and Fatah are unlikely to reconcile any time soon.

Nonetheless, Israeli Prime Minister Benjamin Netanyahu was swift to condemn the agreement. The Israeli government is loath to negotiate with a government that includes Hamas, unless the organization first forswears violence and recognizes Israel and the peace accord.

The objection to a unity government is so emphatic that Israel last year cut off transfers of taxes and customs collected on the Palestinians’ behalf in protest over the move.

“Hamas is an enemy of peace. It’s an Iranian-backed terror organization committed to Israel’s destruction,” Netanyahu said in a statement. “President Abbas, you can’t have it both ways. It’s either a pact with Hamas or peace with Israel.”

Indeed for the Israeli right, and many in the center, a unity agreement serves as compelling proof to argue that the Jewish state has no partner for peace, and can walk away from peace talks until they do.

The government of Netanyahu is unlikely to cooperate in facilitating Palestinian elections because it might give Hamas a new mandate, said Dror Bar Yosef, an expert on the Palestinians.

However, many Israeli observers believe that Israel needs to allow the Palestinians to settle their differences if there is any chance for a peace compromise between the two nations.

“The main obstacle to peace is the lack of reconciliation,” said Bar Yosef. “Abbas couldn’t compromise even if he wanted” because it would expose him to criticism from Hamas.

Experts say that Abbas and Hamas leader Meshal took the step forward this week because they are under rising pressure on other fronts. Abbas is looking weak because neither the peace process with Israel nor his campaign for United Nations recognition has yielded any results. Abbas’ government is also weak because it facing a budget crisis due to a shortfall of donor money.

A reconciliation gives Abbas a domestic achievement and enables him to reclaim the mantle of leader of a united Gaza Strip and West Bank.
“It allows him to put pressure on the Quartet” of peace process sponsors, said Akiva Eldar, a columnist for the liberal Haaretz newspaper. “And to say, ‘We have a couple of months before the election. If you don’t help me, Hamas is going to win the election.’”

Hamas feels the momentum of political Islam surging throughout the region, but nonetheless has been buffeted by changes due to upheaval in the Middle East. It has been forced to relocate out of Syria because of the unfolding civil war there, putting it at odds with Damascus and Iran.

The Islamic militants are looking to ingratiate themselves to Egypt and Qatar, and reconciling with Fatah will make them look better. Some analysts believe that if the Muslim Brotherhood in Egypt accepts the peace treaty with Israel, Hamas will be forced to take a more moderate approach to Israel as well.

“The fact that the Muslim Brotherhood is going to respect the Camp David Agreement with Israel will make it difficult for Hamas to be in a situation in which they don’t recognize Israel,” said Eldar.

Still, there are power bases in both Fatah and Hamas who are expected to oppose the reconciliation, so as not to give up their positions. Many prominent Hamas leaders in the Gaza Strip are believed to oppose Meshal as going soft on Hamas ideology: recently the Hamas chief said Palestinians should focus on non-militarized struggle against Israel.

In addition, there is a sizeable list of disputes still unresolved between the two sides such as when to hold elections and how to merge the security services of Hamas in Gaza and Fatah in the West Bank.

Despite those challenges, Al Quds University political science professor Mohammed Dejani believes that as time goes on public frustration with both political parties is becoming more and more of a factor.

“The situation is at the brink of a collapse, because there is so much despair in among the people,” he said. “Popular frustration is like a volcano.”
Some of that frustration could be heard in the commentary of the young Gaza journalist activist.

“It’s not easy for the people to live, but the leaders have the money, the facilities and the ability to travel, to eat, to work, and to do what they want,” she said. “Until now, we, the people, are suffering from the divisions, not the leaders.”