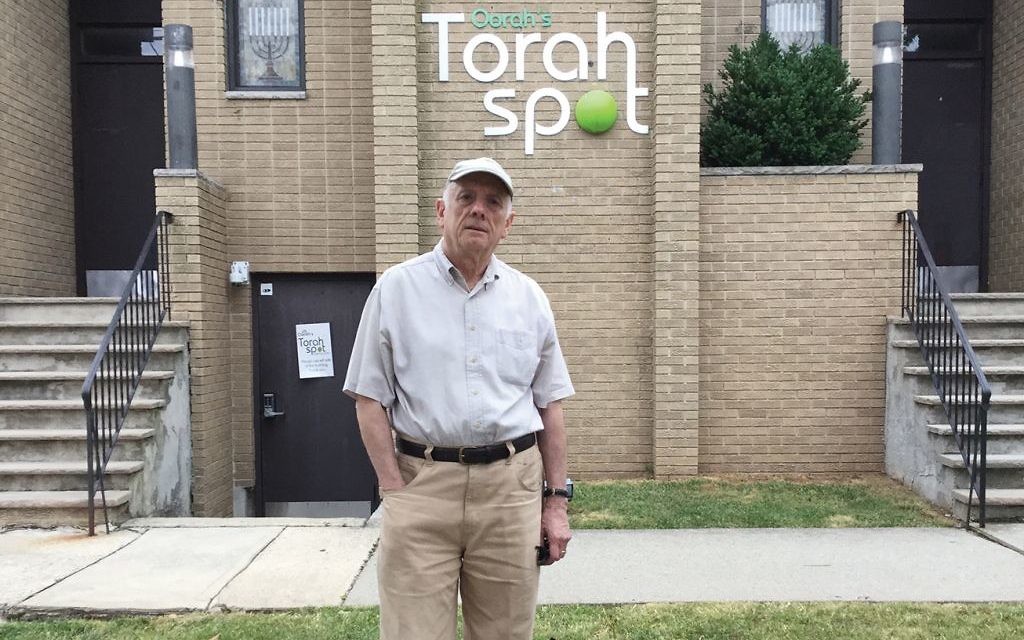 In 2007, a small Modern Orthodox congregation in Staten Island, once the cornerstone of a growing community, found itself struggling to pay its mortgage and salvage a dwindling membership Like many Young Israel synagogues, a once-thriving network of Modern Orthodox congregations across the country, the 40-year-old Young Israel of Eltingville suffered from the neighborhood’s changing demographics, as young families moved out and the remaining members aged. It was also hit hard by the nationwide economic crash as donor dollars dried up.

The synagogue had become something of a lifeline for its remaining members. And in an effort to save it, then-president of the board, Sidney Stadler — described until recently by fellow congregants as the “synagogue’s beacon” — struck up a deal with Oorah Inc., a large charedi outreach organization best known for its operation of Kars4Kids, which raises money for the nonprofit’s family programs through car donations.

According to the June 2007 agreement, Oorah would become the sole owner of the Young Israel building in exchange for $250,000, financial responsibility for all improvements, repairs, utilities and insurance, and, most importantly, an understanding that the congregation would be able to keep up its regular functioning —daily services, contracting the rabbi and collecting dues from members.

Now, nearly a decade later, the congregation finds itself locked in a battle with Oorah for control of the synagogue. Later this month, the New York State Supreme Court is scheduled to confirm or deny an arbitration award from a religious court that stipulates that the synagogue owes Oorah $1 million, an amount that, if confirmed, would likely force the congregation to foreclose on its building and surrender all of its assets to Oorah. The deal that once sought to keep the synagogue afloat today threatens to sink the congregation altogether, said the synagogue’s president, Max Robek.

“If we lose this case, it would be a death sentence for our shul,” said Robek, who has been a member of the synagogue for 17 years.

The synagogue now shares the building with members of Oorah Inc., who run the building as a preschool. Courtesy of YI of Eltingville

Complicating the matter are the dealings of the beit din, or religious court, that ruled on the dispute. In an unusual twist that has the appearance of a conflict of interest, the 2007 agreement stipulated that in the case of any dispute between the two parties, Rabbi Chaim Mintz, the father of Oorah’s acting president, Rabbi Eliyohu Mintz, would arbitrate. When a dispute arose at the end of 2013 between the Young Israel and Oorah regarding who would have control of the main sanctuary, the beit din ruled in Oorah’s favor.

“Everything started to feel surreal when we found out Sid [Stadler] had asked the father of one of the involved parties to arbitrate in case of a disagreement,” said Harriet Goldman, a longtime synagogue member and current board member. “The situation took on a Luis Buñuel quality,” she said, referencing the 20th-century surrealist filmmaker.

Now, the synagogue is defending itself in civil court against Oorah’s claims that it owns the building outright, and against the potentially crippling arbitration award, by arguing that Stadler entered into the agreement with Oorah without the knowledge or permission of the congregation.

“The members of the shul were unaware of the dealings with Oorah while the purported president agreed to sell its property and subsequently enter into an arbitration agreement with Oorah to determine ownership of the property,” said Solomon Rubin, the attorney who is representing the Young Israel pro bono. “For the members to lose their shul without knowing what happened would be unconscionable.”

According to the complaint filed by the synagogue, Stadler, who purported to be the president of the Young Israel at that time, was never officially elected to the position and went ahead with the transaction without the board’s approval. Many details of the 2007 agreement were concealed from other synagogue members, the complaint alleges.

“No votes were ever taken. He [Stadler] entered into the agreement without our knowledge or concurrence,” Robek said. When other members of the synagogue found out about the terms of the agreement — details of the agreement were kept secret from other board members until the recent controversy, Robek said — they were “shocked.”

“It came as a complete surprise to us. Sid entered into an agreement that didn’t allow us to retain ownership of the building,” Robek said. “At the time, we just trusted that everything he did was in the shul’s best interest. He was the one who had built up the shul from nothing.”

Today, the total membership of the synagogue is under 20 families. Services are largely kept going by the community’s quickly growing Kollel Orchos Chaim of Staten Island, an institute for advanced Talmud study that pays a monthly stipend to its students, who study there full time. Launched in 1998 with only a few members, the kollel today has nearly 30 students, most of whom have growing families. The symbiotic relationship between the Young Israel and the kollel is very unique to the Eltingville community, Robek said.

Though students at the kollel ideologically align with the charedi Oorah organization, based in Lakewood, N.J., today an epicenter of right-wing Orthodoxy, students, who describe the kollel as “Lakewood style,” find themselves appalled at Oorah’s aggressive tactics in the developing lawsuit, according to a former kollel student and current community member, who asked that The Jewish Week not use his name in order “not to risk the ire of Oorah.”

“Absolute power corrupts absolutely,” he said. “Oorah’s attitude is ‘everything is ours, and we’ll let the shul continue here out of the goodness of our hearts.’ Now, the situation has turned into a power struggle, and sadly, it’s the community members who stand to lose the most.”

Robek praised the relationship between the shul and the kollel. “Even though we come from different schools of thought, we come together as one community to support the shul,” he said, describing most of the Young Israel membership as “modern, middle-class working people.” He said he cannot recall any arguments over ritual practice between synagogue members and kollel members, despite differing levels of stringency on certain matters (i.e. dress code or standards of kashrut). “It’s not something you see every day,” he said.

If the Young Israel loses the suit and cedes control of its building to Oorah, the mikvah, a ritual bathing house essential to the functioning of an Orthodox community, is also at stake, the source added. The change, he said, would be “catastrophic” for both the Young Israel and kollel communities. (The mikvah is built as an extension to the synagogue building.)

A recent Purim party at the synagogue took place in the main sanctuary since Oorah does not allow shul members to access the rest of the building. Facebook

“Oorah has not committed to keeping the mikvah running if they take over the shul for their own purposes,” he said.

Rubin, the synagogue’s lawyer, believes the Young Israel has a strong case, based on state law regulating religious institutions. The agreement struck up between Oorah and Stadler, he argued, completely dodged approval from the State Attorney General’s office. According to New York State law, a religious corporation may not sell real estate without making an application to the court; the application must indicate that the transfer is in the best interest of the entity, a prerequisite that clearly would not have been met in this case, said Rubin.

The New York State Attorney’s General’s office has not yet responded to requests for comment.

Oorah officials declined to comment, saying the litigation is still ongoing. In its court filing, Oorah argues that the original 2007 agreement was legitimate.

Today, Oorah is using the synagogue’s building to run Jewish Little Star Preschool, its early childhood education program. Until 2014, Oorah was using the entire building for the preschool, except the main sanctuary, where the Young Israel still held weekday and Shabbat services. But in late 2013, Oorah decided it wanted to convert the main sanctuary into classrooms as well. (According to a synagogue member, the preschool has fewer than 20 children enrolled. The preschool administration could not be reached for comment.)

“We were slowly being boxed out of our own synagogue,” said Rhoda Stern, a synagogue board member. “At this point, it’s become malicious.”

Since the conflict over the main sanctuary arose, say congregants, Oorah has not permitted synagogue members to use any other part of the building, even on weekends when the preschool is not in session. When Stern, who has been a member of the synagogue since the late ’70s, wanted to host a kiddush for her son’s bar mitzvah two years ago, congregants were forced to crowd into the small hallway in the back of the sanctuary along with the coat racks in order to celebrate. The spacious social hall on the lower level, used during the week for Oorah’s functions, remained locked and vacant.

“I was still proud to host it in the shul, even though the accommodations were not ideal,” said Stern.

But midway through 2014, Oorah decided to ramp up its tactics, congregants allege. Without the knowledge or permission of congregants, the organization installed cameras in the main sanctuary to keep tabs on synagogue activities. The cameras have since been removed.

Goldman said Oorah also started to make other demands, such as keeping the lights in the bathroom off at all times, even on the weekends when services were in session.

Oorah, and its closely affiliated charity Kars4Kids, which donates millions to Oorah annually, have been under legal scrutiny in the past. In 2012, the organization lost a federal lawsuit of over $300,000 in scholarships that were allegedly promised to Jewish day school students at Staten Island’s Jewish Foundation School. In 2009, the organization paid tens of thousands of dollars in settlements to state attorneys general in Pennsylvania and Oregon over its failure to disclose that the funds raised through its vehicle donation program benefited children of a specific religion. In 2010, the New York State Attorney General announced that his office had subpoenaed Joy for Our Youth — the name under which Kars4Kids is incorporated — as part of a broader investigation into charities that accept car donations.

Oorah was also caught up in an alleged Ponzi scheme run by Lakewood real estate developer Eliyahu Weinstein in 2010. Weinstein is serving a 22-year federal prison sentence for running a fraudulent real estate investment scheme that caused $200 million in losses. He also allegedly laundered $140 million through a number of Jewish charities, including Kars4Kids, according to news reports.

In the case of the Young Israel of Eltingville, a lot more than money stands to be lost if the court rules in Oorah’s favor, said Stern. The mother of two teenagers enrolled in Jewish day schools, Stern said she and her family are “barely making ends meet.” Losing the synagogue — and the community — would be “totally devastating.”

“Just the thought of uprooting my family and moving to a different community overwhelms me,” she said, her voice quavering. “This shul is everything to me. I’ve brought my children to services here since they were 2 years old. The thought of not knowing where my kids will be in shul for Rosh HaShanah or where I’m going to be this Shabbos — it’s beyond me.”

She paused to take a deep breath. “I just hope the people on the other side realize that there’s a lot more at stake here than a building and a million dollars.”