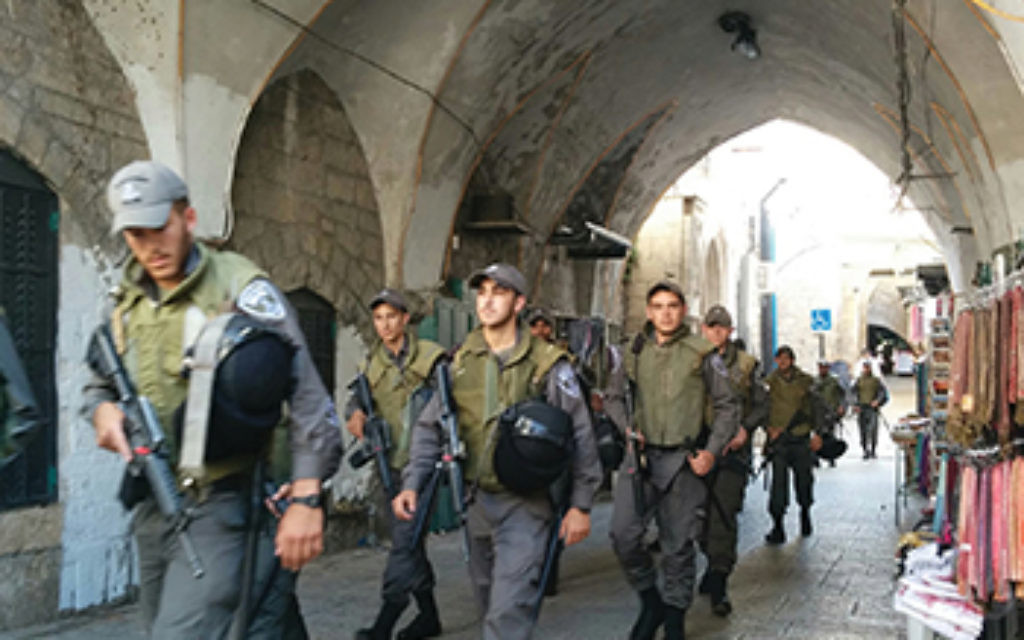 Jerusalem — Just last month, the plaza outside the entrance to Damascus Gate was full of toy merchants selling gifts for the Muslim festival of Eid el Adha.

This week, however, the plaza at the foot of the grand Ottoman entryway was virtually empty of pedestrians save for a band of nine Israeli border policemen who tried to shoo away a bystander.

“You can’t sit there. Take your pictures and keep moving,” said an officer who would only give his first name, Shmuel, because he wasn’t authorized to speak to reporters. “This is a sterile area.”

The police, part of an unprecedented deployment of security personnel in the Old City in the wake of a wave of terrorist stabbings, had good reason to be unfriendly to loiterers: just a day earlier, in almost the exact same spot, a Palestinian pulled a knife on a group of Israeli police special forces, injuring three officers.

The stabbings were part of a string of attacks in Jerusalem and elsewhere — sometimes coming at the rate of just a few hours apart — that has left Israeli authorities helpless.

Though Jerusalem’s Old City has been a familiar flashpoint for tension between Israelis and Palestinians for decades, few remember such a clamp down: detachments of security personnel seemingly on every corner, barricades, metal detectors, scared and weary-looking border policemen moving through the stone alleyways in column formations. “I watched your army conquering the Old City in 1967 — that was nothing compared to what is happening now,” said Ali Jiddah, a former Palestinian militant turned Old City tour guide.
Surveying the Arab market just inside the Damascus Gate, Jiddah complained that the violence has emptied the Old City of tourists, but predicted that the strife would continue anyway. “It’s going to get worse. It can’t be controlled. There is a new entire generation that can’t be controlled. They are saying ‘enough.’”

The spree of attacks and stabbings spread beyond Jerusalem to places like Tel Aviv and Afula in northern Israel. The spike in assaults has unnerved Israelis all over the country, not just in Jerusalem. But the main focus still seems to be Jerusalem, with attacks happening between Israeli and Palestinian neighborhoods.

In East Talpiot, two Palestinians attacked passengers on an Egged bus with knives and guns, killing two and injuring 10. At the same time, in the charedi neighborhood of Geula, a Palestinian man drove a car into three people at a bus stop, killing one and then stabbed several others.

On Monday, two Palestinian teens stabbed a 13-year-old boy riding a bicycle along the light rail line in the Jerusalem neighborhood of Pisgat Zeev. The teen-on-teen attack was the most surprising spurt of violence in a day that saw four stabbings.

The crisis has ratcheted up pressure on the government to take an unprecedented move: enforcing a closure on the Palestinian neighborhoods in east Jerusalem.

“The pace at which the terrorists are striking and the public atmosphere in the wake of the attacks is bringing Israel back very quickly to the days of fear at the beginning of the last decade — and require Benjamin Netanyahu to take more determined and unequivocal steps,” wrote defense correspondent Amos Harel on the Haaretz website.

The epicenter for much of the strife has been in the Muslim Quarter, where a Palestinian attacker killed two Israelis on Oct. 3 in an attack that signaled the start of the upsurge in violence last week. That Saturday evening attack took place right outside a Jewish enclave on “Haguy” (or “El Wad”), originally purchased by Ariel Sharon but now occupied by Israelis connected to Ateret Cohanim, an organization that funds efforts to “reclaim” properties in Palestinian neighborhoods for Jews.

A week after the attack, the cobblestone street where the stabbing took place had been converted into an outdoor study hall, with yeshiva students taking up half the street discussing texts, while Palestinian women in hijabs passed on the other side of the barrier. On both sides of the alleyway, there were barriers manned by police, while Arab shops adjacent to the complex were shuttered.

“Bibi, let us return and rebuild the Jewish Neighborhood in Herod’s Gate,” read a sign calling for an expanded Jewish presence in the Muslim Quarter that was hung near the yeshiva students.

Maor Scheinberg, a spokesman for the group, said the study hall was meant to demonstrate solidarity with the Israeli people as well as make the point that “Jerusalem is the capital of Israel” and that Jews can’t let “the nations of the world tell us where we can and can’t build.”

Just a few steps away in an alleyway sat Iddo Tamami, a 17-year-old student at the Ateret Cohanim yeshiva and a former student of Nehemia Lavi, a rabbi at the seminary who was killed in the Oct. 3 stabbing attack that also killed Aharon Banita, a 22-year-old father of two.

Talami explained that the outdoor study hall was meant to show a Jewish presence after the attacks. “So Jews will be able to come here with security,” he said. Talami accused Prime Minister Netanyahu of failing to keep Israelis safe — especially right-wing nationalist religious Jews who threw their support behind him at the last moment before the recent election.

“If he can’t protect our security when there are three or four attacks per day, it means somebody is not doing their job,” he said.

Talami remembered Lavi, a father of seven, as a “sensitive” teacher who took his students on tours of the Old City, telling them that the Muslim Quarter streets around the yeshiva used to be full of Jews and synagogues.

When asked about the shuttered Palestinian shops near the spot of the attack, Talami repeated accusations that the shop owners didn’t offer help to the wounded.

It’s true that Arab shopkeepers didn’t spring to help the victims of the attack, said Jihad Nur, the Palestinian owner of a store called Peace Land. But Nur insisted that the reticence was out of fear that police would think that they were also attackers. “I’m an Arab. How can I help a Jew? They would shoot me."

In the hours after the attack on Sunday, police ordered Peace Land and other nearby shops to close, leaving Nur and other shop owners temporary shut in, unable to go home.

Nur, who specializes in T-shirts with Hebrew lettering of sports teams and colleges and who even has a picture with New England Patriots’ Jewish owner, Robert Kraft, on his shop wall, said that many shop owners didn’t bother to open because of the lack of tourists.

In the recent weeks, he’s gone entire days without buyers. “There is a discussion among the shopkeepers about whether or not to close the shops,” he said. “Some argue that it’s not good to close the shops. When they remain open, tourists will think it’s normal.”

Further down in the Old City road near the entrance to the Western Wall plaza, Shlomo Zalman Frenkel, an ultra-Orthodox seminary student from Bnei Brak, shared a soft drink bought in the Arab market. He and other students came to the Old City, he said, because they wanted to see the situation in Jerusalem before the start of the school year.

“It’s scary. You see how empty the Western Wall is, and you realize how they [the stabbers] succeeded to sow fear,” he said. “When we walk around, we’re looking over our shoulder. You don’t know where it [an attack] could come from.”

Frenkel said he didn’t share the views of the yeshiva students at the solidarity study table about building up a Jewish presence in the Muslim Quarter. “Our rabbis think we have to reach peace. A piece of land,” Frenkel said, “doesn’t compare to the price of the blood of one Jew.”