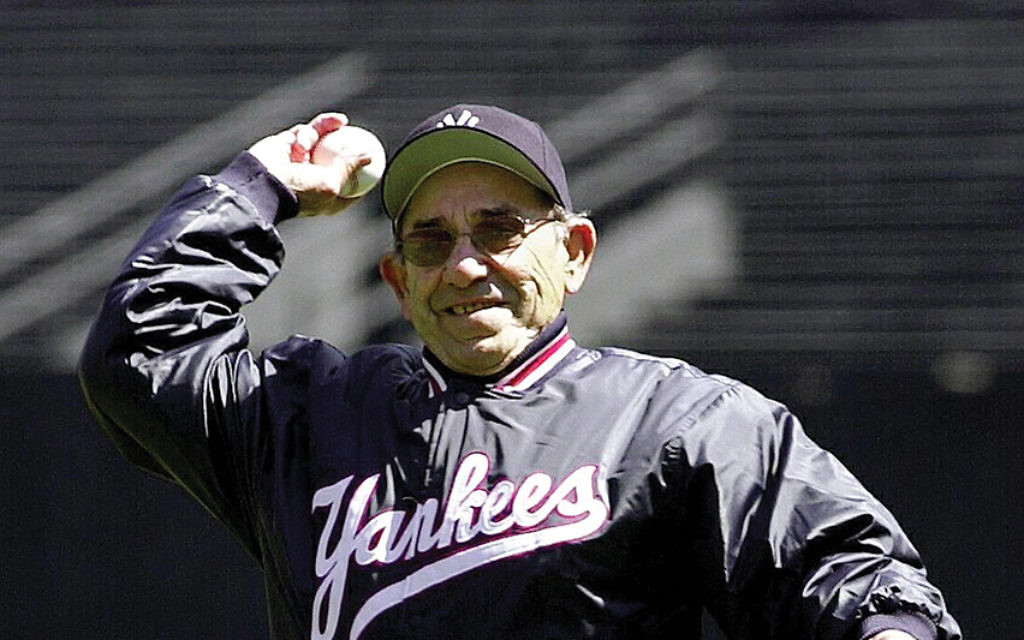 Jerusalem — Yogi Berra’s death failed to make the news here, which is understandable, because he wasn’t known to Israelis. Except for the Americans who have moved here, Israelis don’t follow baseball, and care not a whit about Yogi’s playing career or his place in American lore as a pre-eminent philosopher. Which is a shame, because they could learn a lot from what Yogi had to say, particularly if you apply the Hall of Fame Yankee catcher’s mash-up of fortune-cookie philosophies, self-contradictory and redundant malapropisms to the Mideast crisis Israelis refer to simply as the matzav, or situation.

“Always go to other people’s funerals; otherwise they won’t go to yours.”

“Why buy good luggage? You only use it when you travel.”

“Nobody goes there anymore. It’s too crowded.”

“Pair up in threes.”

“If people don’t want to come to the ballpark, how are you going to stop ’em?”

But few have delved deeply enough into his gnarled syntax to glean that he was, in truth, a neoconservative scholar with an innate understanding of the geopolitical Middle East reality. Consider, as proof, the following statements he made and their inner meaning:

“It was hard to have a conversation with anyone; there were so many people talking.”

Welcome to the Israeli-Palestinian peace talks.

“There are some people who, if they don’t already know, you can’t tell ’em.”

And there’s no point in arguing with ’em. That’s the real reason it’s hard to have a conversation with anyone on the Israeli-Palestinian conflict.

“I wish I had an answer to that, because I’m tired of answering that question.”

The thought that goes through the mind of every minister, diplomat and functionary at every news conference in Jerusalem. When was the last time any of them admitted an original thought?

“I never said most of the things I said,” and, “Half the lies they tell about me aren’t true.”

Deniability is key to engaging in the talks.

“If you ask me a question I don’t know, I’m not going to answer.”

“You can observe a lot by watching.”

What Yogi meant to say was: “Pay attention.” Israelis have been watching and observing, and they understand what they see. They observed how leaving Lebanon in 2000 yielded Hezbollah, and war in 2006; they observed how leaving Gaza in 2005 led to war in 2008 and 2014, and they know war is coming again on both fronts. And on the horizon they watch ISIS, and Iran going nuclear.

“It gets late early out there.”

Yogi might have been talking about the left-field shadows at Yankee Stadium, but he was also mimicking what everybody pushing the peace process pronounces: This is the best time to make the deal because the status quo is unsustainable, and it’ll only get later and darker faster, from here on out. It is, they like to argue, getting late very quickly.

That’s another argument they like to use, to keep the talks going.

“We made too many wrong mistakes.”

Sitting around the kitchen table, the only debate among Israelis is choosing between the lesser of two evils: Do we go for the bad option, or the worse one? And if that’s the choice, then either pick is a mistake. In hindsight, perhaps it was too many bad choices, and not enough worse ones.

“When you come to a fork in the road, take it.”

Those were the bad choices taken.

That’s what the delusional say about the peace process, and its illusion of progress. But if you’re already making too many wrong mistakes, rushing ahead only means making more of them.

“If you don’t know where you’re going, you might not get there.”

“The future ain’t what it used to be.”

Once upon a time the future held out hope. A new summit, a new plan, a new president, a new prime minister — everybody hustling to push the “peace process” forward. But that’s all it ever was: motion, not movement. And motion without movement means doing the same thing over and over again and expecting a different result. Wasn’t that Einstein’s definition of insanity? Or was that stupidity? Yogi, of course, said it simpler:

“It’s déjà vu all over again.”

No kidding. Yogi understood how hard, how impossible, the whole thing is: “In the Middle East, you don’t know nothin’.”

Finally, for the absolutely unversed, his most famous tautology:

This speaks to the frustrations in all of us. Yogi, the eternal optimist, the endearing and enduring philosopher, calls to us from his grave not to lose hope. For Yogi, it’s over. For us, it ain’t.

Elli Wohlgelernter is a writer based in Jerusalem.