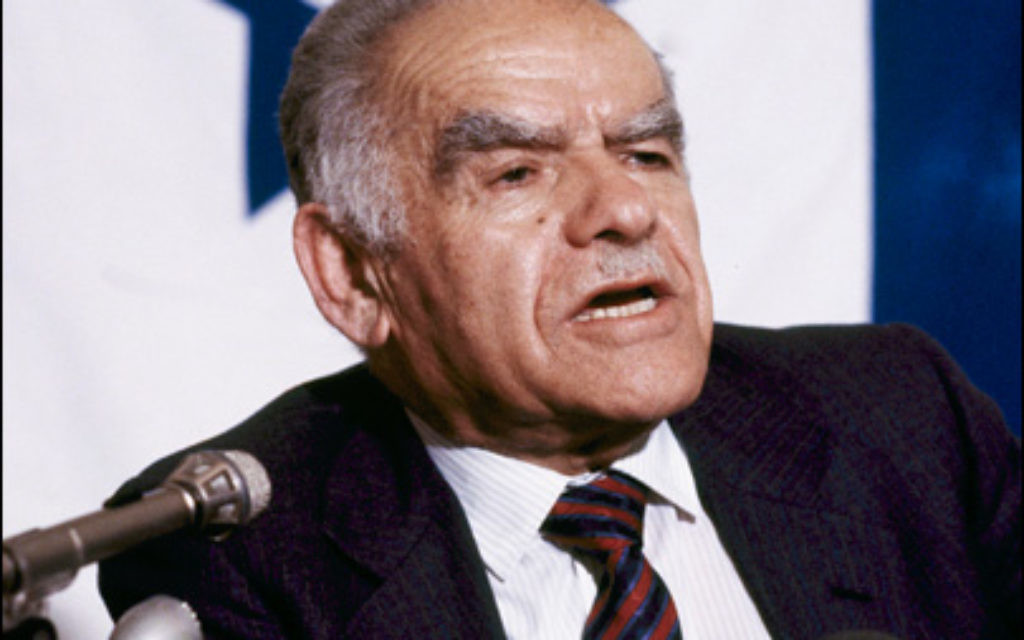 He had been living in a nursing home in Tel Aviv and had Alzheimer's disease for several years.

Shamir was born Yizhak Yzernitzky in Ruzinoy, Poland in 1915. In 1935 he left Warsaw, where he was studying law, moved to Palestine and enrolled at the Hebrew University.

He joined Etzel, the Revisionist underground organization, in 1937, and in 1940 became a member of Avraham Stern's Lehi, a more militant organization, where he became part of the leadership troika.

Shamir was arrested twice by the British during and immediately after World War II. Granted political asylum in France in 1947 after escaping from a British prison camp, he returned to Palestine in 1948 and resumed command of the Lehi until it was disbanded following the establishment of the State of Israel.

Shamir joined Israel's security services in the mid-1950s and held senior positions in the Mossad. He joined Menachem Begin's opposition Herut party in 1970 and became a member of its executive. In 1973 he was elected a member of Knesset from the Likud party — a position he held for the next 23 years. In 1977, he became Speaker of the Knesset. In this capacity he presided over the historic appearance of Egyptian President Anwar Sadat in the Knesset and the debate over ratifying the Camp David Accords with Egypt two years later.

Shamir served as foreign minister between 1980 and 1983. Among his achievements were closer ties with Washington.

Following Begin's resignation in October 1983, Shamir became prime minister until the general elections in the fall of 1984. Those elections led to the formation of a national unity government based on a rotation agreement between Shamir and Labor leader Shimon Peres. Shamir served for six years as prime minister — from 1986 to 1992 — first heading a national unity government, and then as head of a narrow coalition government.

Shamir's second term as prime minister was marked by the 1991 Gulf War, in which Shamir — despite Iraqi missile attacks on Israel's civilian population — chose a policy of restraint. The October 1991 Middle East Peace Conference in Madrid inaugurated direct talks between Israel and the neighboring Arab states as well as multilateral regional talks.

After his party lost the 1992 elections, Shamir stepped down from the party leadership and in 1996 retired from the Knesset.

“Yitzhak Shamir was a brave warrior before and after the founding of the State of Israel," Israeli President Shimon Peres said in a statement. "He fought with courage against the British Mandate in the days of the underground and his incredible contribution to the State of Israel during his time in the Mossad will remain forever enshrined in the tales of bravery of our nation. He was loyal to his views, a great patriot and a true lover of Israel who served his country with integrity and unending commitment."

Israel's surviving former prime ministers are now Peres, Ehud Barak, Ehud Olmert and Ariel Sharon, who has been in a coma since suffering a stroke since 2006.