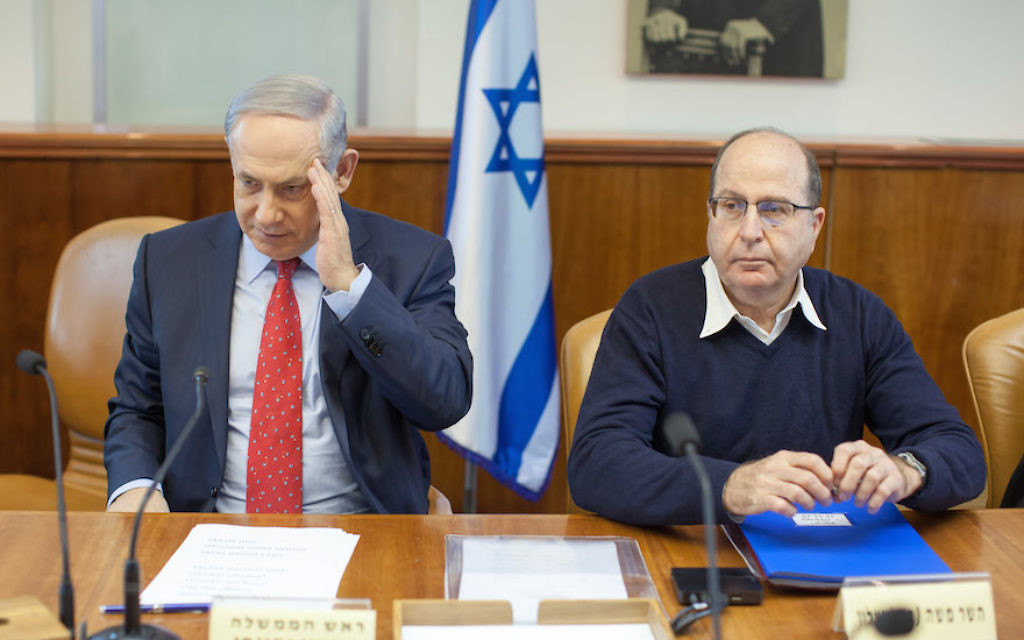 The resignation by Ya’alon, who is rumored to be replaced with former foreign minister Avigdor Liberman, came in a statement Friday, Ynet reported.

Ya’alon said his resignation was due to Netanyahu’s “conduct during recent developments and in light of lack of trust in him.” He also said he was leaving politics.

Earlier this week, officials from Netanyahu’s Likud party confirmed that talks were ongoing to have Ya’alon, a Likud member and former chief of staff, replaced with Liberman, leader of the right-wing Yisrael Beiteinu party. The talks involved bringing Yisrael Beiteinu into the coalition, a move that would have broadened from 61 to 67 the coalition’s number of seats in Knesset, which has 120 lawmakers.

In a statement Friday, Netanyahu said: “I regret Bogie Ya’alon’s decision,” using Ya’alon’s nickname. “I think he should have remained a full partner in the country’s leadership as foreign minister.” Netanyahu said Ya’alon was not asked to drop the position due to any “crisis in trust” but as part of a political deal designed “to being stability to Israel as it faces major challenges.” He added he offered Ya’alon the post of foreign minister, but that Ya’alon decided to resign instead.

Ya’alon’s resignation follows discord between him and Netanyahu over policy issues, most recently on whether Israel Defense officers should be permitted to express their personal opinions publicly. Netanyahu harshly condemned Deputy Chief of Staff Yair Golan’s drawing of parallels between Nazi Germany and Israeli society during a Holocaust commemoration ceremony earlier this month.

“If there’s something that frightens me about the memory of the Holocaust is the recognition of revolting processes that happened in Europe in general and in Germany in particular back then, 70, 80 and 90 years ago, and finding proof of their presence here, in our midst, in 2016,” Golan said.

Ya’alon subsequently called on IDF officers to “continue to speak their mind.”

Yuval Diskin, a former head of the Israel Security Agency, or Shin Bet, wrote an Op-Ed that was published in Yediot Acharonot Friday saying that Liberman’s appointment may be the “beginning of the end” of the State of Israel because it would encourage Jewish fundamentalists , according to Diskin, and place the defense establishment under the control of “an insecure prime minister and an inexperienced defense minister.” He said he would not trust them to use the army responsibly.

Diskin also revealed in his Op-Ed that Ya’alon disobeyed direct orders while serving as the head of the IDF Israeli Central Command in 1998, when Netanyahu was prime minister. Shin Bet was ordered to storm a building in which were two Hamas terrorists near Hebron. The IDF was ordered to keep away from the area to avoid escalation but Ya’alon sent troops anyway because he disagreed with the order, Diskin revealed.

Ya’alon and another senior officer told Diskin that “despite the decision of the defense minister and the chief of staff, they were sending the troops we required as backup. I was proud of their courage to take such a decision,” Diskin wrote.

With Ya’alon walking away from his seat in the Knesset representing Likud, stepping in to replace him will be Yehuda Glick, a U.S. native who leads a group that advocates for wider Jewish access to the Temple Mount.

In October 2014 he was seriously wounded in an attempted assassination at the Menachem Begin Center in Jerusalem by a Palestinian gunman. As a guide, he also leads groups of Jewish tours to the Temple Mount to earn his livelihood.