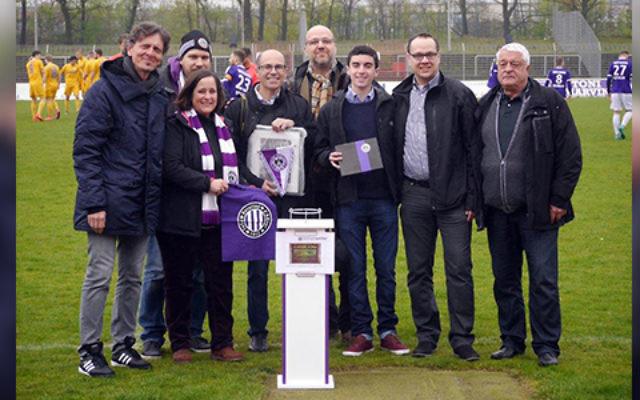 Traveling from New York to Berlin for a three-day visit was certainly an out-of-the-ordinary weekend for me. But, then again, it was unusual circumstances that brought my dad and me across the ocean to celebrate the 115th anniversary of Tennis Borussia Berlin (“TeBe” as it is called by fans), the storied sports club and football team that my great-great-grandfather founded in 1902.

About three years ago, my dad came across several stories about Alfred Lesser, my great-great-grandfather, all of which were posted on the TeBe website. Prior to his Internet search, the only thing my dad knew about Alfred was that he was a successful businessman in Berlin, before Hitler came to power.

After researching further, my dad and I discovered that Alfred was a special figure in sports during the first third of the 20th century. On April 9, 1902, at just 19 years old, Alfred and 12 other men founded what was then known as the Tennis und Ping-Pong Gesellschaft Borussia. The club originally intended to only play tennis and Ping-Pong, but Alfred soon started its football and boxing divisions. Alfred went on to become the sponsor of TeBe and the club’s president for its first 30 years. TeBe, with its purple and white uniforms, became known as the team of the Jewish community of Berlin.

During Alfred’s presidency, TeBe was among the best football teams in Germany, culminating with winning the Brandenburg Championship in 1932. However, when Hitler was appointed chancellor of Germany and the Nazi Party came to power, everything changed. In April 1933, an “Aryans only” policy was instituted in all German sports clubs, and TeBe was compelled to expel all Jews, nearly one-third of its membership. Shortly after being removed from TeBe, Alfred founded the all-Jewish Berliner Sportsgemeinschaft, which he headed until November 1938, when Nazi legislation barred Jews from all sports facilities.

Due to the dire situation in Germany, Alfred, his second wife, Gertrud (also known as Tutti), and Eva, his daughter and my great-grandmother, made their escape in 1939. They eventually settled in New York, where Alfred worked for a few years in a five-and-dime and was active in a soccer league. Depressed, Alfred took up drinking and died of a heart attack on October 25, 1946, at the age of 64. In 1951, a letter from Tutti was published in TeBe’s newsletter, in which she wrote: “I still lay purple-white flowers on [Alfred’s] grave because he loved Tennis Borussia so much!”

When sporting events recommenced in West Berlin following the War, TeBe again emerged as one of Germany’s top football teams in the early 1950s, playing in front of crowds exceeding 80,000. Unfortunately, over the next 40 years, TeBe’s performance on the pitch largely declined, except during the mid-1970s, when the team earned two brief promotions to Germany’s top league. Since the 1990s, TeBe has been relegated to Germany’s fourth and fifth divisions. Nevertheless, while other similarly situated teams have been wiped out, the fighting spirit of TeBe has kept the club going.

Today, most of the work for TeBe is done by the voluntary commitment of its fans. TeBe has an active youth development program that emphasizes tolerance and global awareness, a spirit that Alfred first instilled over a century ago. According to TeBe’s current website, “part of the TeBe spirit is the continued appreciation of Jewish traditions.” The team and its fans actively oppose anti-Semitism, racism and homophobia.

In 2015, after my dad and I contacted Jan Buschbom, a TeBe fan and historian who authored the articles on the club’s website, we received a very nice letter from TeBe’s chairman, Andreas Voigt. After several paragraphs recounting Alfred’s contributions and importance to the club and its culture, the chairman’s letter concluded with: “We want to let you and your whole family know that the club would feel entirely honored and glad if you’d visit us in Berlin someday. With our warmest purple white regards.”

Over the past couple of years, my dad and I talked about possibly visiting TeBe in Berlin, but I had mixed feelings about it. On one hand, Berlin was where Nazism was born and centered, it is where many of my relatives and millions of others were ordered to be murdered, and where Alfred’s life and dreams were crushed. On the other hand, TeBe is part of our family’s legacy and I believe that my ancestors would have wanted me to embrace the team and the values for which it stands.

April 9, 2017 marked the 115th anniversary of the club’s founding, so my dad and I communicated with Jan about coming to Berlin near that time. TeBe was scheduled for a Saturday afternoon home match on April 16, to mark the anniversary. My dad and I arrived in Berlin the day before and Jan met us at the hotel on Saturday morning, a few hours before the game. After years of corresponding, we were thrilled to meet Jan, and he was just as delighted to meet Alfred Lesser’s descendants. We took the train (the S-Bahn) to meet Jan’s friends, several other long-time TeBe fans, at their self-constructed fan clubhouse. The clubhouse was amazing, containing a museum/shrine to TeBe and its history. We spent an hour at the clubhouse, going through the extensive memorabilia collection, most of which had been purchased in antique shops and on eBay.

We then went to the game at the Mommsenstadion, which was built in the 1920s and has been TeBe’s home-field for several years. We were introduced to the team’s board members and staff, including the team’s long-time announcer Carsten, another volunteer. We were also given a tour of the team’s offices, which included a display of trophies and awards, some of which were over 100 years old.

Before the start of the game, we were brought downstairs into the locker area, where we met TeBe’s players, coaches and the referees for the match. The board members brought us on the pitch, where they presented us with several gifts, including TeBe jerseys with “Lesser” and the number one on the back.  The crowd applauded loudly for us.

We were seated with TeBe’s diehard fans, the “Party Army.” Carsten played great music throughout the game, including some of the customized TeBe songs. One of their most popular revisions includes the Beatles’ “Hey Jude,” with the title lyrics being replaced with “TB,” and a whole lot of German. While this has not been TeBe’s most successful year, the team scored two goals in the first five minutes of the match, en route to a 4-0 victory. The fans in our area pronounced us good luck charms and wanted us to come back for all TeBe’s games.

The next day, Jan planned on taking my dad and me on a tour of Berlin, but Carsten and half a dozen others from the Party Army wound up joining us as well. They took us through the Jewish quarter and into a museum that was a small factory during World War II where the owner employed mainly blind and deaf Jews. This museum also housed an exhibit on Pre-World War II Jewish German athletes. Of the dozen or so athletes featured, three were TeBe alums — a champion boxer, a football star and a female tennis player — all brought to the club by Alfred. The group also took us to the site in Berlin where Alfred and the other founders met to form TeBe. Lastly, we walked through a beautiful neighborhood overlooking the River Spree, where Alfred’s house had been located. At the end of our Sunday together, we hugged our goodbyes and exchanged Facebook friend requests.

My dad and I returned to New York the next day. On the flight home, we talked the whole time about the warm and amazing people we met and that we plan on staying in touch with the club going forward. April 9, 2022 marks TeBe’s 120th anniversary, and it will be here before you know it.