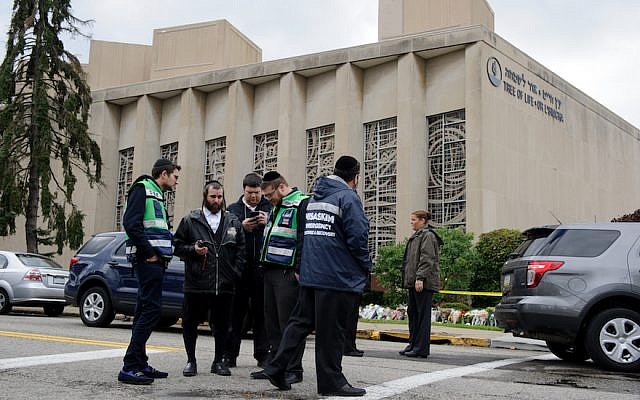 A Jewish emergency crew and police officers at the site of the mass shooting at the Tree Of Life synagogue in Pittsburgh, Oct. 28, 2018. Getty Images

(JTA) — A 70-year-old worshipper who was critically injured in the shooting attack last month at the Tree of Life synagogue building was released from a Pittsburgh hospital.

Daniel Leger went from the hospital to its rehabilitation facility, from where he was discharged on Monday, the Pittsburgh Tribune-Review reported. His discharge came on the day of the shloshim for the victims, marking 30 days since their deaths.

Leger, a retired nurse and chaplain at the hospital that treated him, was shot in the chest. He is a member of Dor Hadash, one of the three Jewish congregations that was holding services in the building at the time of the Oct. 27 attack by a lone gunman, and lives in the Squirrel Hill neighborhood where the complex is located.

Pittsburgh police and SWAT operator Timothy Matson, 40, remains hospitalized, from several gunshot wounds and is listed in stable condition. Three other police officers were injured in the shooting.

Andrea Wedner, 61, who was shot in the arm, was released from the hospital earlier this month. Her mother, Rose Mallinger, 97, was killed in the attack.