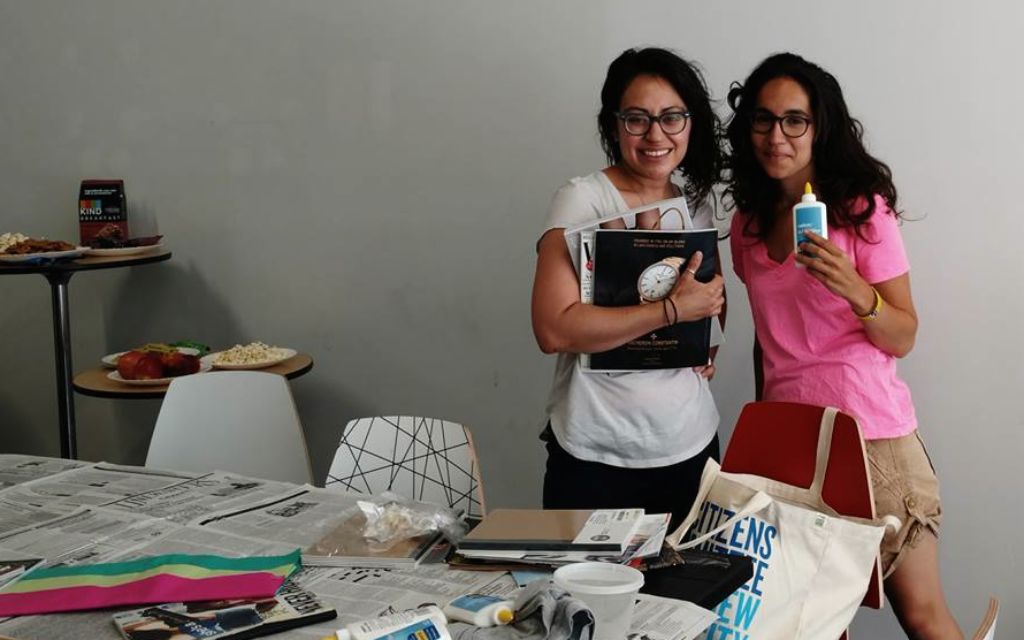 A year and a half ago, Ariela Yomtovian, 26, and Meirav Ong, 27, met at a makeshift minyan, where they were reciting Kaddish for their respective mothers.

“We noticed that there were emotions that hadn’t been dealt with and feelings that hadn’t been processed,” said Yomtovian, 26, a nonprofit consultant who has lived in Crown Heights for two years. Despite attending services at a local Orthodox congregation to chant the traditional prayer, neither felt that the synagogue Kaddish service was a space where they could work through the complex emotions that follow the loss of a parent.

“We got together and spoke about how there was really no resource in Brooklyn and even in the greater New York area, so we decided to do something,” said Yomtovian.

Together, they created the Creative Healing Collective, a monthly meet-up where young people can process the death of a loved one through eclectic, artistic forms of expression such as dance, art, yoga and writing.

At the collective's second workshop in June, a group of young adults participated in a collage session at Repair the World in Crown Heights, the newest branch of the social justice organization that provides service and volunteering opportunities to young Jews. At the event, Debbie Vishnevsky, 30, who helped start the collective along with Yomtovian and Ong, led participants through an artistic session centered around the theme of “getting it out.” Whether “it” be buried emotional baggage or general feelings of unease or self-doubt in the wake of loss, Vishnevsky encouraged participants to express themselves in journals through writing and collages. Piecing together colorful patchworks from old magazines, participants were free to chat while “exploring the intersection of creativity and loss,” according to the event’s organizers.

“We wanted a space for a younger demographic … as opposed to people who have lost parents when they’re much older,” said Ong, an artist specializing in watercolor and Judaica.

Creating meaningful spaces for spiritual or meditative engagement outside of the synagogue typifies a generation of younger Jews who are growing frustrated with conventional religious practice, but are hungry for spiritual meaning and authenticity.

A March 2014 Pew Research Center study found that millennials are increasingly feeling unconnected to religious institutions. The study was closely preceded by Pew’s “Portrait of American Jews,” which found that nearly a third of young Jews define themselves as having no religion.

In 2013, former Jewish Week staff writer Gabrielle Birkner and fellow journalist Rebecca Soffer started Modern Loss, a website dedicated to sharing the unfiltered, often unspoken realities of those navigating life after confronting the death of a loved one.

The Creative Healing Collective, which rests on the self-imposed pillars of inclusivity and free expression, is indicative of the solution many young Jews have turned to: deconstructing and reinventing tradition to fit their changing needs.

Though the collective currently caters primarily to Jews, Yomtovian hopes to collaborate with both mosques and churches to bring in participants from other faiths.

“When we created the collective, one of our missions was to create a space for both non-Jews and Jews,” she said. “We are so blessed in the Jewish faith to have an organized way of mourning, even though mourning and grief are very different.”

The collective’s third event, “Writing Through Grief,” took place at the end of July in a Crown Heights apartment. Yaffa Vinikoor, the workshop’s facilitator, led participants through a series of writing exercises designed to “heal both mind and body,” according to event organizers. Vinikoor, a public health nurse, was chosen to lead the event because of her unique approach to grief, informed by her experience with terminally ill patients.

“It has given her a really good sense of the fragility of life and empathy, which makes her a really great facilitator,” Yomtovian said.

The workshops are generally two hours long, beginning with a 30-minute warm-up and ending with a 30-minute debriefing period, allowing participants to return to a peaceful state of mind before leaving the event. Attendees are permitted to leave at any time and are encouraged to stay to chat afterwards over banana bread and tea.

This month’s event, a singing workshop led by a music therapist, will be held on Aug. 15, Yomtovian said, with the location still to be determined.

“It’s not the physical space that is as important as the space we create with the people who are there,” Yomtovian said. “A lot times people think they’re supposed to be feeling a certain feeling at a certain time. … But it’s also made it very formulaic and, at times, very rigid. Sometimes the way in which you gently engage with a feeling will ignite the processing.”

Yomtovian, who is on the steering committee of UJA-Federation of New York’s Imagine Jewish Brooklyn initiative, which seeks to develop Jewish community-oriented programming in the borough, hopes to collaborate with other Jewish organizations.

“Knowing that we’re doing this for our moms is amazing,” Ong said. “We’re so grateful for the community that we have, but some people just don’t have that. It’s really rewarding to be able to provide that space for people.”