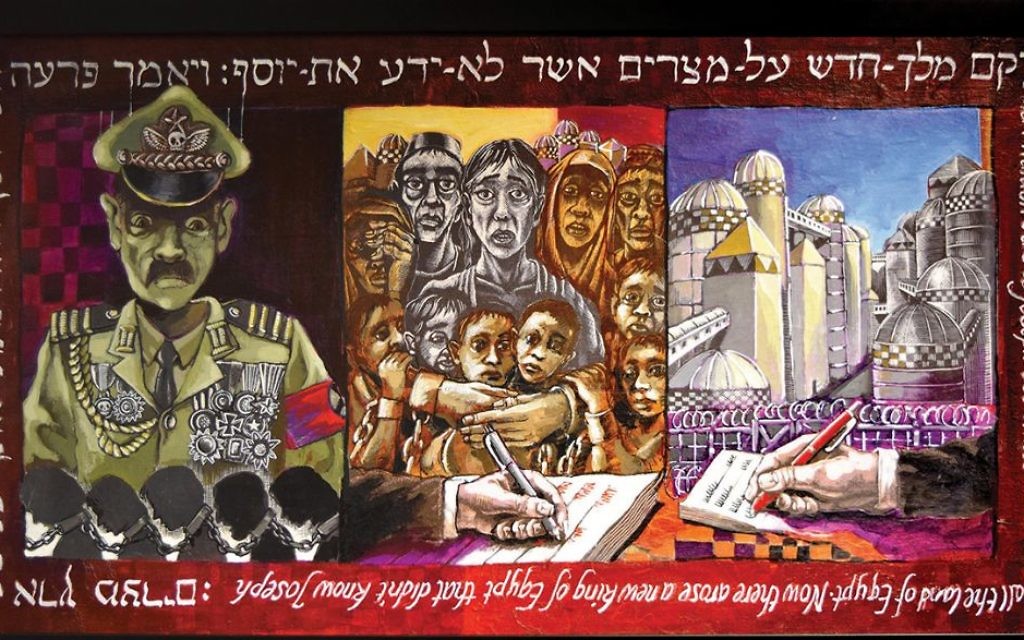 Lynn Avadenka says that a poem and a painting begin the same way: With an artist facing the blank page.

In her solo show at the Yeshiva University Museum, “How A Poem Begins: Lynn Avadenka and the Poet Rahel,” the distinguished printmaker and book artist presents new work completed in Israel, while she was in residence at the Gottesman Etching Center at Kibbutz Cabri in the Galilee. (The kibbutz has a specialized large-scale etching press, one of only six in the world.)

The etchings reflect the poetry of Rahel Bluwstein — known as Rahel and considered the mother of modern Hebrew poetry. Born in 1890 in Russia, she began writing poetry at age 15, first traveled to Palestine in 1909 and returned again to settle there in 1919, spending time in the Galilee. She died of tuberculosis at age 41.

An installation shot of Lynn Avadenka’s “How a Poem Begins” exhibit.

At Cabri, Avadenka was drawn to the landscape and its many shades of green, and she looked for the poet’s presence, her words and her silence, in the surrounding area. She brought with her sheets of Japanese paper from her studio in Detroit, on which she had printed images of hand-written drafts of Rahel’s poetry, from a book edited by a relative of the poet.

“You keep working until it starts to reveal itself,” she says in an interview, about her process. Her large-scale triptych, “You Are Yourself A Map,” includes hand-drawn lines to resemble old-fashioned Hebrew notebooks, green landforms, rectangles that suggest windows or areas of a map, hints of swirling water and elements with the poet’s handwriting. Rahel’s poetry was neither flowery nor scholarly, nor is Avadenka’s interpretation. The artist thinks of her work as “a visual translation.”

Avadenka’s style is graceful and refined. It’s not surprising to hear that she spent time in Japan, as the work has a Japanese sensibility.

The exhibition includes other etchings from Cabri, like “Now A Poem Begins,” using elements from the larger piece in different ways, with a different color palette. (Her stay at Cabri was supported by the Covenant Foundation.) The artist also gathered other materials to give context to Rahel’s life, including a wall of hand-colored pages of an English-Hebrew vocabulary textbook, and other books and materials.

Avadenka, who has created many beautiful bilingual artist’s books on traditional texts and Israeli writers, says that she has long been drawn to letters, for their graphic quality, and the meaning they convey. About the beauty of Hebrew letters, she says they are “so old and they are still so new, they are the basis of everything.”

“How a Poem Begins – Lynn Avadenka and the poet Rahel” is on view at the Yeshiva University Museum through July 23.

The initial idea was to do a show about good and evil, or evil and good,” as curator Laura Kruger explains. “But the evil was so much more compelling as a visual dramatic subject than the good.”

Like other recent shows at the Hebrew Union College-Jewish Institute of Religion Museum, “Evil: A Matter of Intent” is a concept-oriented show, and there’s much that provokes serious thought. Evil is seen through the eyes of more than 40 artists, who grapple with questions of the roots of evil, the presence of God in the face of inhumanity, and how to find beauty in the cracks through darkness.

While several represent the Holocaust, others reflect on atrocities like the Armenian genocide and tragedies in Chechnya and Rwanda; events of murder, sex slavery, terrorism; destruction of knowledge; indifference.

Molly Picon in the 1929 “The Jolly Orphan.” Rappoport, Museum of the City of New York

The written word plays a powerful role in several pieces, like David Newman’s “The Destruction of Knowledge,” with books drenched in paint and mutilated, and Archie Rand’s graphic-style depiction, “The Protocols of the Elders of Zion,” with two thugs discussing the text. John Lawson uses mixed media in “Portrait of the Philosopher Daniel Klein,” including quotes from Klein’s writings about the nature of good and evil. Harriete Estel Berman creates letters from colored found objects, spelling out the words of “The 10 Modern Plagues,” linking the plagues with poisoning the environment.

Andi Arnovitz, known for her work with textiles, printed stories of female suffering onto silk belts, in “Beaten Out of Them.” In a similar juxtaposition of feminine materials and brutal subjects, Carol Hamoy uses lace and fabric in “Good Girls/Bad Girls: Dr. Mazeltuv Barukhova,” recalling when, during a bitter custody fight, the doctor hired her cousin to kill her husband.

In “What Would You Have Done? Study for Wall of Indifference,” Judy Chicago and Donald Waldman depict a scene in the forest, a train deporting Jews to concentration camps, a baby tumbling from a window, with bystanders looking on.

As Laura Kruger, curator of the exhibition, writes in the catalog, “The artists in this exhibition, using an international visual language, challenge the concept of heroes and villains. … It is up to each of us to wage war on evil.”

“Evil: A Matter of Intent” is on view at the Hebrew Union College Museum through June 24.

Walk down the Bowery today and the traces of the vibrant Yiddish theater scene that once flourished there are long gone. The Bowery was the first home of Yiddish theater, with halls like the People’s Theatre hosting sell-out crowds of 2,500 soon after the turn of the last century.

Around the corner at Grand and Chrystie Street, the Grand Theatre once stood. Opened in 1903, it was the first theater built specifically for Yiddish productions. A large photo of its marquee, which promotes Jacob P. Adler in “The Jewish King Lear,” serves as the opening to “New York’s Yiddish Theater: From the Bowery to Broadway” at the Museum of the City of New York. While the crowd outside the Grand is well-dressed, the adjacent street is lined with tenements

The exhibition describes the vibrancy of a world that once was, its glory and its stature, and its influence on Jewish culture and American theater. Like the plays that were produced, the history of Yiddish theatre is filled with artistic flourish, humor and melodrama, with its own local royalty.

From its early days, there was a strong connection between the actors and the audience. The early shows were filled with improvising and ad-libbing, with songs and shtick added. Actors played directly to the emotions of theatergoers, who felt comfortable talking back and adding their own directions. Later, a more serious, literary approach took hold.

The more than 250 artifacts in the engaging show include a bust of writer Abraham Goldfaden, who penned many successful productions; Molly Picon’s boyish costume, with knickers, for “Yankele”; a banner of the Hebrew Actors’ Union; vintage posters and playbills; 1905 sheet music for “The Jewish Yankee Doodle”; and puppets from the satirical Yiddish Modicut Puppet Theater, merging Yiddish with avant-garde art and popular culture.

There’s much to study here, with layers of rich cultural history. There’s a 1956 photo of Frank Sinatra and his agent looking at posters of Yiddish actor Menasha Skulnik and a 1934 photo of actor Maurice Schwartz and Albert Einstein, after a performance of “Yoshe Kalb.” Pointing to the Yiddish theater’s connections to Broadway, there are Zero Mostel’s boots from “Fiddler on the Roof” and sketches for set designs by Boris Aronson, a groundbreaking Russian-born designer who broke into Broadway.

The thick, lavishly illustrated catalog (Columbia University Press) stands on its own as a work of history, with essays by guest curator Edna Nahshon, professor of Theater and Drama at The Jewish Theological Seminary, and other scholars.

“New York’s Yiddish Theater: From the Bowery to Broadway” is at the Museum of the City of New York through July 31.