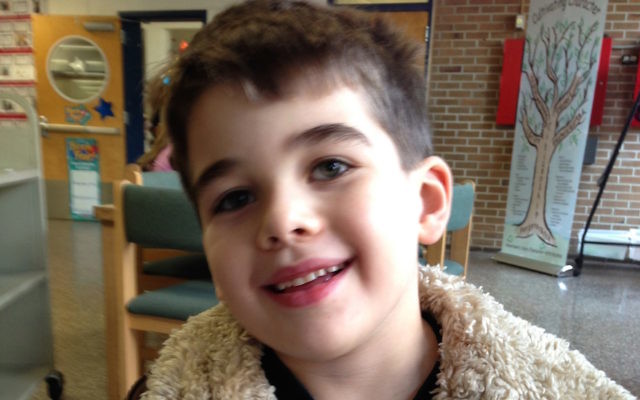 Noah Pozner, 6, was among the 20 child victims of the Dec. 14, 2012 shooting massacre at the Sandy Hook Elementary School in Newtown, Conn., that also claimed six adults. (Courtesy of the Pozner family, via Forward)

A Florida woman who pleaded guilty to threatening the father of a victim of the 2012 Sandy Hook Elementary School massacre was sentenced to five months in prison.

During her sentencing in federal court in Fort Lauderdale on Wednesday, Lucy Richards, 57, apologized for previously calling the shooting, which killed 20 children and six school staff members, a hoax.

“I don’t know where my head and my heart were that day when I made the calls but they were not in the right place,” Richards said.

She had made a series of death threats against Lenny Pozner, the father of Jewish student Noah Pozner who was slain in the shooting.

“You gonna die, death is coming to you real soon,” Richards told Pozner over the phone, according to the federal indictment.

She was arrested in December 2016 and pleaded guilty in January. In addition to her prison sentence, Richards will serve five months of house arrest and three years of supervised release.

Noah Pozner, 6, was the youngest victim of the December 2012 massacre, in which 26 people were killed by Adam Lanza, 20, who forced his way into the school building and opened fire. Lanza killed himself at the school and killed his mother in their home prior to the attack.

A Florida Atlantic University professor, James Tracy, was fired in 2013 after writing on his personal blog that Sandy Hook was a hoax and sending the Pozners a letter demanding proof that Noah once lived and that they were his parents.