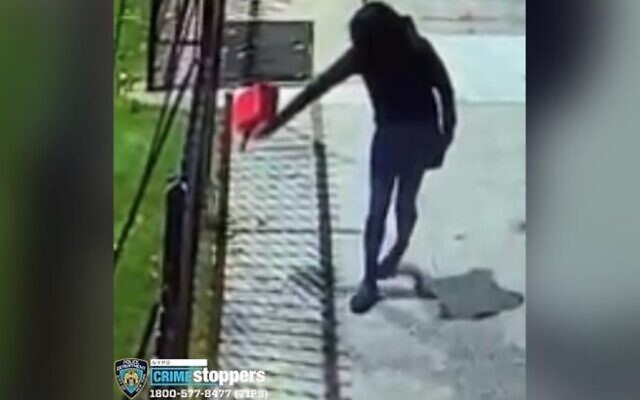 In a surveillance video, a suspect pours gasoline outside of Yeshivah of Flatbush, before lighting a match, October 14, 2021. (NYPD)

Good morning, New York. In the spirit of the season, we’ve been checking out this list of scary Jewish movies, from our friends at Kveller.

ARREST: A 39-year-old neighborhood woman was arrested and charged with reckless endangerment and a possible hate crime for setting a fire in front of the Yeshivah of Flatbush on Avenue J in Brooklyn. (ABC 7)

ON THE BLOCK: Christie’s in New York will auction a watercolor by Vincent van Gogh next month, splitting the proceeds between the Texas businessman who owns it and the heirs of two Jewish families from whom it was stolen during World War II. (New York Times)

ALTER KAKTIVISM: Read more about the @oldjewishmen TikTok account, actors and comedians who stage fake but surprisingly relevant protests about the high price of lox and lack of public restrooms and post them to social media. (New York Post)

Huntington, Long Island native Brian Goldner, the CEO of the Hasbro toy company, died at 58. Goldner persuaded Hollywood executives to base big-budget films on toy classics like the Transformers, G.I. Joe and Battleship.

New Yorkers Jonathan and Dina Leader have created a grant program to boost smaller Jewish non-profits and innovative programs in the city.

Ami Ayalon, a former director of Israel’s Shin Bet security agency, shares his thoughts and philosophy about what Israel needs to do to achieve relative peace and security and to sustain itself as a Jewish homeland and a liberal democracy. Buy tickets for this Commonpoint Queens virtual event here. $8 members/$10 non-members. Noon.

92Y presents lyricist and composer Stephen Schwartz in conversation with journalist Frank DiLella, along with performances from some of Schwartz’s notable stage hits, which have included “Wicked,” “Pippin” and “Godspell.” In person, $25. Buy tickets here. 7:30 p.m.