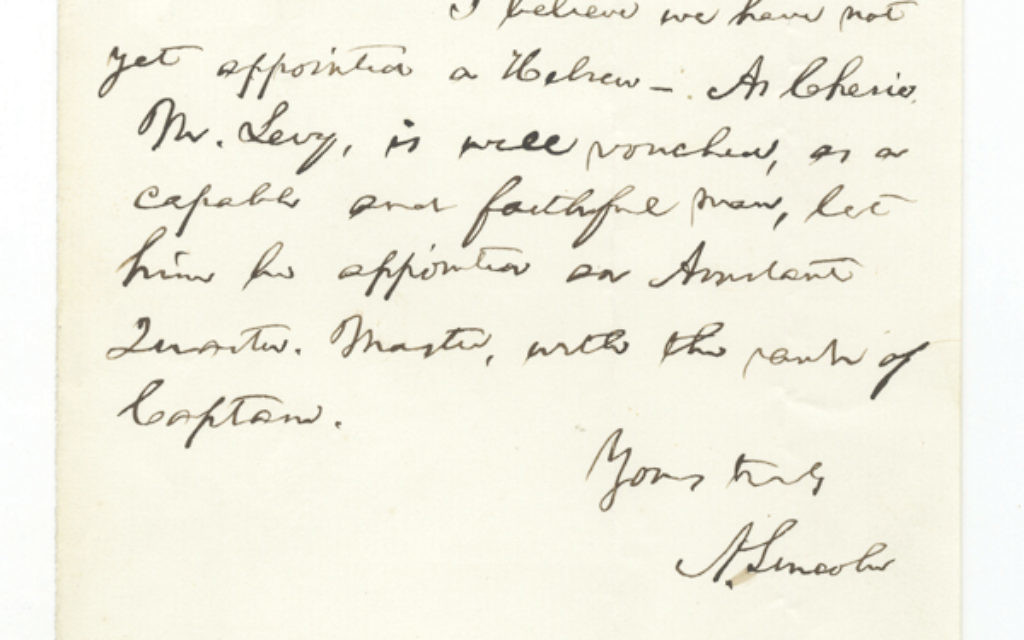 On June 2, 1864, President Abraham Lincoln issued a parole pass to Charles Jonas, a Confederate prisoner of war, to return to Illinois to see his father on his deathbed. The soldier arrived in Quincy just in time to see his father, Abraham Jonas, still alive.

During the Civil War, Abraham Jonas and several of his sons, including Charles, were divided in their allegiance. Abraham Jonas, an English-born Jew, was a lawyer and political ally of President Lincoln and the only recorded person Lincoln referred to in a letter as “one of my most valued friends.” The small handwritten note that enabled Charles Jonas to take a three-month leave was a testament to Lincoln’s long friendship with his father.

That note, smaller than an index card, is on display at the New-York Historical Society, part of a stirring exhibition that opens to the public on March 20, “With Firmness in the Right: Lincoln and the Jews,” created in collaboration with the Shapell Manuscript Foundation, with many original letters, documents and images on display for the first time. The exhibition is inspired by the publication this month of “Lincoln and the Jews: A History” by Jonathan Sarna and Benjamin Shapell, a beautiful illustrated volume combining highlights of the Shapell collection and an engaging historical narrative.

Not only has it been 150 years since the end of the Civil War, but the first night of Passover this year, April 3, aligns with significant anniversaries. On that date in 1865, the Union Army captured the Confederate capital of Richmond, Va., leading to Gen. Robert E. Lee’s surrender to Gen. Ulysses S. Grant six days later. Five days after that, on April 15, which was the fifth night of Passover and also Good Friday in 1865, President Lincoln was shot. This year, the first night of Passover falls on Good Friday. The life of President Lincoln aligns so well with the holiday’s themes of freedom and liberation from slavery and oppression, that the book and exhibition are particularly timely — and may spark new seder conversations.

“One of the exciting things was working on material that nobody had seen,” Sarna, professor of American Jewish history at Brandeis University, says in a telephone interview from his Massachusetts home, noting that many of the documents had previously been in private hands. “I did feel that looking at Lincoln through Jewish eyes allowed me and the reader to see Lincoln in a different way.”

Sarna, who speaks with the skill of a natural teacher, says, “It’s not a small matter that Abraham Lincoln had a Jewish friend.” As the authors point out, Lincoln had more than one, and was the first president to have Jews in his circles of friendship and acquaintanceship.

“Sometimes you read a person’s private letters and you’re disappointed,” Sarna says. “For James Buchanan, Andrew Johnson, Richard Nixon, the private is unappealing. That is not true of Lincoln. One comes away from reading the private letters just as impressed, even more than the public materials. I understood why people can spend their whole careers on Lincoln. He’s remarkable. America was extraordinarily fortunate to have had him at that time as president.

“Lincoln held himself to a higher standard. He judged people as individuals. That’s what comes through here.”

The authors tell expansive stories of Lincoln’s friendship with the enigmatic Issachar Zacharie, a chiropodist who sometimes served as his emissary; his appointments of the first Jewish chaplain and quartermaster to serve in the military; his interest in theater with Jewish themes (even seeing “Gamea,” or “The Jewish Mother,” a play dealing with anti-Semitism, twice in one week); his rescinding of Grant’s General Orders #11, which expelled Jews from Northern Mississippi, Tennessee and Kentucky; and his death on the intermediate Shabbat of Passover. The first eulogies about him were offered in synagogues that Shabbat morning.

In great detail, they tell of the 1863 episode at Beverly Ford, Va., where a Jew, two Catholics and two Protestants were shot for desertion, in front of a rabbi, priest and minister, despite pleas to General Meade and a visit by Rabbi Benjamin Szold to Lincoln.

The authors describe many Jews that Lincoln knew, whether a photographer whose velvet-trimmed coat he borrowed for the photograph, tailors, clothiers, doctors, his optician. “These and similar interactions between Lincoln and Jews might, on their own, seem trivial. For the most part, they have escaped historians’ notice. Aggregated, however, they form a pattern. The President of the United States, they show, insisted on treating Jews on the same basis as everyone else. For Lincoln, we have seen, this was nothing new,” they write.

For Lincoln buffs and academics, these stories may seem familiar, but the level of detail the authors convey is truly impressive.

For the general reader and viewer, there’s something about looking at letters close up that’s profoundly appealing — they’re immediately accessible moments that are historical and private, remarkable that they’ve survived in their fragility, with the handwriting and rhetorical flourish of another era. Like the man, Lincoln’s distinctive signature is modest but strong. He often signs off as A. Lincoln, with the crossbar of the A flowing into the top loop of the L (and a bold period between them) and each of the rest of the letters leading into the next.

Also evident is how much Lincoln cares about words. He writes — and speaks — in a simple, eloquent style, with rhythms that are poetic and homespun. And he liked word play.

In a telephone interview from Israel, Shapell, founder of The Shapell Manuscript Foundation, says, “This is a book I always wanted to share.”

“Lincoln has an amazing curiosity about Jews. And they had the same about him,” he says. “What will surprise people is that he seemed to latch onto Jews.”

During the Civil War, bigotry and mistrust of all minorities was common. In the military, anti-Semitism was casual but omnipresent. Lincoln stood against the grain, as Shapell explains. “When Grant was expelling the Jews, Lincoln was freeing the blacks; as anti-Semitism was going out of control in the army, Lincoln was appointing a Hebrew,” referring to his appointment of an Orthodox Jew as assistant quartermaster with the rank of Captain in 1862. At the time some 50 other Jews also served as quartermasters.

About Lincoln’s religious nature, Shapell says, “Lincoln never joined a church, although his wife Mary may have. He was always searching for answers. He had a private religion.” He explains that Lincoln came to believe that what happens is really out of human hands; but that perhaps, by individuals doing the right thing and being fair, outcomes might be changed.

With the passion of a collector, Shapell quotes documents with ease and explains that Lincoln knew the Old Testament very well and made use of verses both well-known and obscure. As war threatened, Lincoln referred to a line from the Book of Daniel, writing that he lived in “troub’lous times.”

“While he is acknowledging that he is essentially in the lion’s den,” Shapell explains, “he is also confident that, like Daniel, he will prevail.”

And, in his second inaugural address, Lincoln leads into his famous utterance “with malice toward none” — a theme of his life — with a reference to the 19th Psalm, “the judgments of the Lord are true and righteous altogether.”

“He had to answer to 700,000 human beings slaughtered. Why did God let the war go on? He was unschooled but not uneducated — he took this half verse that no one heard of. That was his consolation.”

For more than 35 years, Shapell has been building the collection. He describes himself not as an eclectic collector but as someone who focuses upon specific themes, like American presidents, Mark Twain, the Holy Land. “What interests me most,” he says, “is the human aspect: moments of humility, honesty, irony.”

Shapell is particularly drawn to a handful of items from the collection that are highlighted in the exhibition’s final gallery; they relate to Lincoln’s last days. Lincoln signed a travel pass on April 14, to “Mrs. Dr. Stone,” the wife of his doctor. “That could be the last thing he signed. It ties into the irony. It’s not a Jewish item, but a very impressive thing that tells a story of what he did that last day.”

It was Dr. Robert K. Stone who was called to Lincoln’s side when he was shot, and who signed the autopsy report, shown in the exhibit, stained with blood. So Lincoln was connected to both of the Stones on his last day. Also mentioned in the report is Dr. Charles Lieberman, a Jewish ophthalmologist, who was also at Lincoln’s deathbed vigil and who is depicted in the 1867 painting on view by Alonzo Chapel, “The Last Hours of Abraham Lincoln.”

The authors recount how Mary Todd Lincoln recalled, after her husband’s death, that they used to speak of visiting Jerusalem — that even in the final days of his life, he expressed a yearning to travel there. But Lincoln never got to see Israel firsthand. In the last gallery of the exhibit, Frederick Edwin Church’s luminous oil painting, “Jerusalem from the Mount of Olives” (1870), suggests what he might have beheld.

“With Firmness in the Right: Lincoln and the Jews” is on view at the New-York Historical Society Museum & Library, 170 Central Park West, Manhattan, from March 20-June 7. Much of the material is available for viewing at shapell.org