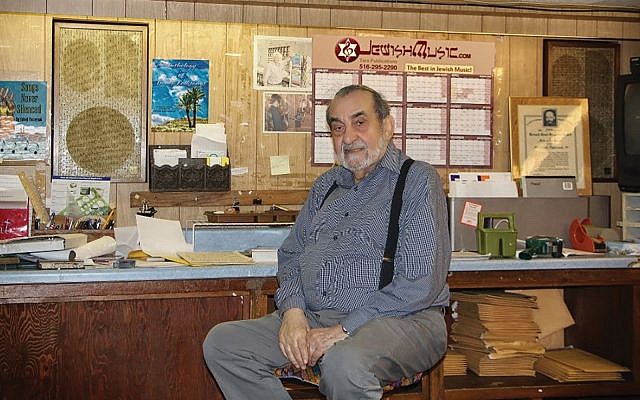 Velvel Pasternak, a walking encyclopedia of Jewish music who freely shared his knowledge, in the offices of his company Tara Publications, located in the basement of his Long Island home. Velvel Pasternak Memorial Page/Facebook

Where would you look and whom would you call if you had a question about any kind of Jewish music: classical, chasidic, cantorial, liturgical, folk, ethnic, Yiddish, Ladino (even Esperanto), pop, rock, reggae and any/everything else?

And when you found your answer, where would you turn to get that actual written piece of sheet music with an explanation, history and context of the text, and of the music?

What would you do if you needed a “lead sheet with chords” of that music or an arrangement of it because you wanted to give it to someone else who could read music?

The only answer to all these questions, and more, is Velvel Pasternak, the consummate musicologist, lecturer, conductor, arranger, humorist, keeper of Jewish music memory and supreme mensch who could fulfill all these needs.

Pasternak, who published more than 150 volumes of Jewish music, who also conducted and arranged music, died here last week at 86. He was founder of Tara Publications, a company that for nearly four generations published, preserved and disseminated the heritage of Jewish music.

A native of Toronto, he received a bachelor’s degree from Yeshiva University, further studied at the Juilliard School and Columbia University. Over the years, Pasternak moved from printed books to e-books, and from cassettes and CDs to MP3s. He later added downloadable sheet music.

Last year, to mark 50 years since the publication of his first Jewish music book, he published “The Jubilee Songbook,” including 240 selections from his previously published music books, providing an overview of popular Jewish music of the 20th and 21st centuries.

Pasternak served as a lifeline for people in the Jewish community interested in Jewish music. He always had — or was — the answer to your question.

What if you wanted to listen to a recording of a well-known piece or an obscure piece that you heard somewhere, sometime, but had only a single clue to help you track it down?

Whom would you call if you wanted to confirm a thought or a theory about Jewish music or just wanted to shmooze about it with a remarkably musically and Jewishly knowledgeable old soul?

Always with a sense of humor.

What if you needed someone to lecture on any form of Jewish music, who could entertain as only a world-class raconteur could, while at the same time imparting wisdom and perspective that only someone with an encyclopedic  knowledge (and an encyclopedia) could?

Who could distinguish between the music of the various chasidic sects by examining the musical styles of the repeating “nonsense” syllables, or tell you the actual origin of some of their most famous niggunim?

Who could be trusted by so many different chasidic dynasties to bring their special tunes to life by orchestrating them with modern instruments and appropriate harmonies?

Who was always eager to strike up a conversation, make a friend, create a bond, correct a misperception, make a new Jewish musical “convert,” even among those who were already enthralled by one form of Jewish music or another?

Who could create a family business, along with his Eyshet Chayil (his “woman of valor” wife) Goldie, and their children out of his lifelong passion for transcribing, preserving and sharing the legacy of the music of his — of our — people?

When Velvel and Goldie would set up their Tara Publications booth at the countless Jewish conventions they enlivened, they could scarcely start unpacking before attendees and friends would descend en masse upon them to get the Jewish music, Jewish humor, human connection “fix” that only they could provide. And the Tara booth was invariably the most crowded one among so many vendors.

That was surely the case at the North American Jewish Choral Festival, where it was my honor and the honor of the Zamir Choral Foundation to bestow its first Hallel V’Zimrah Award to Velvel in 2004.

Our tradition teaches us that a lesson taught with humor is a lesson well taught and one that will be remembered. We will always remember Vel Pasternak as our friend, our teacher, our mentor and our inspiration.

We owe him our gratitude for a life dedicated to our people, to the music of our people and for his menschlichkeit.

Matthew Lazar is founder and director of the Zamir Choral Foundation.