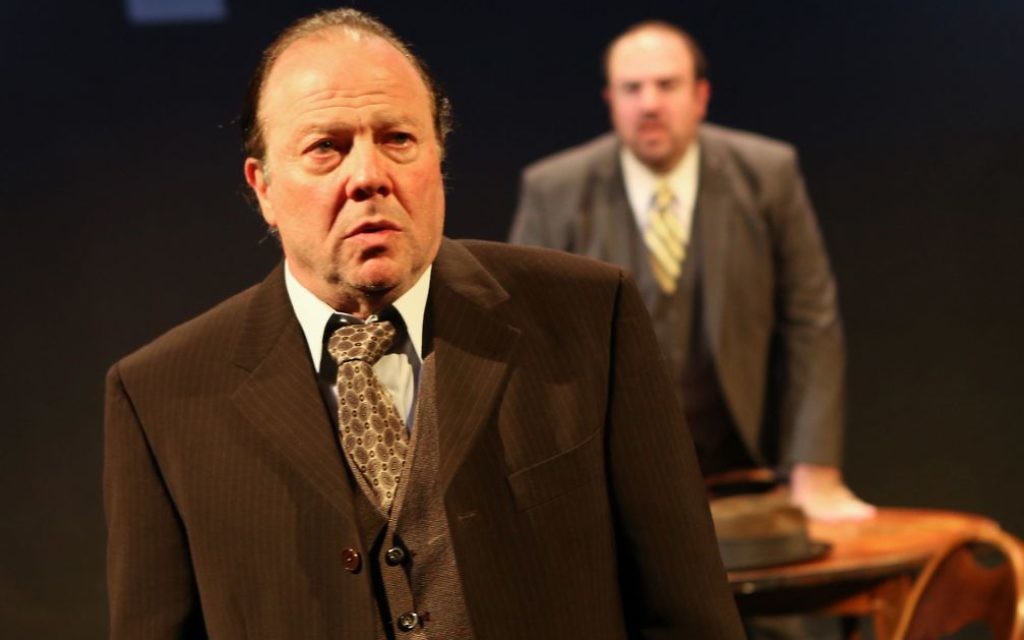 Avi Hoffman as Willy Loman (foreground) and Adam Shapiro as Howard in “Death of a Salesman.” Ronald L. Glassman

The first word in the opening scene has not yet been uttered and already you are transfixed. The old salesman approaches the spare stage clutching two worn, oversized leather valises. At first you don’t notice him. No spotlight shines near him and he somehow seems invisible, a nobody. But there he stands, gathering up himself one more time. He winces, squints, opens and shut his eyes. Is he fending off a nightmare or trying to recapture a lost dream?

And so, linguistically, does “Death of a Salesman,” Arthur Miller’s 1949 classic drama, in no small part by New Yiddish Rep's performance in Yiddish off Broadway at the Castillo Theatre. (There are unobtrusive English supertitles.) This is one of the most riveting plays I have ever seen, with a stellar cast led by Avi Hoffman who fully inhabits his Loman character. And for us Yiddish-speakers, Joseph Buloff’s beautiful 1951 Yiddish translation is a pleasure to hear spoken in a variety of accents.

Full disclosure: Before this performance, I had never seen “Death of a Salesman” in any language. I had not even read the play. (The rule of thumb is that the more Yiddish you learned in yeshiva, the less Arthur Miller you were taught.) More to the point, perhaps my infatuation was with the playwright as much as with the production. After all, with its intermingling of fantasy and reality, quotidian struggles and depiction of have and have-nots, "Death of a Salesman" has a contemporary crackle. And its depiction of a son, torn between becoming a 2.0 version of his father or finding his own way in life, hits close to home.

So I brought along Esther Herzfeld, a master English teacher at Maayanot High School in Teaneck, New Jersey. In the course of her distinguished career, she has taught “Death of a Salesman” for more than 25 years. Esther loved it. She noted that Brooks Atkinson, legendary theater critic of The New York Times, wrote that after seeing Buloff’s Yiddish translation in 1951, he better understood the play. And indeed, some of the play’s phrasing (“You can’t eat an orange and throw away the peel. A man is not a piece of fruit”) sounds better in Yiddish (“Du kenst nisht oyfesn a marants un aroysvarfn dem sholekhts. A mentsh iz nisht keyn farfoylte shtikl frukht”). While the English supertitles are Miller’s text, the exact translation of the second line is “A man is not a rotten piece of fruit!”

And so, whether Yiddish is your mother tongue or you need to Google cholent; whether Arthur Miller is on your personal Mount Rushmore of artistic greats or you were closed out of “Hamilton,” get yourself to Castillo Theatre for an unforgettable evening.

New Yiddish’s Rep’s “Death of a Saleman,” directed by Moshe Yassur, is produced in association with the Castillo Theater, 543 West 42nd Street, and runs through November 22nd.