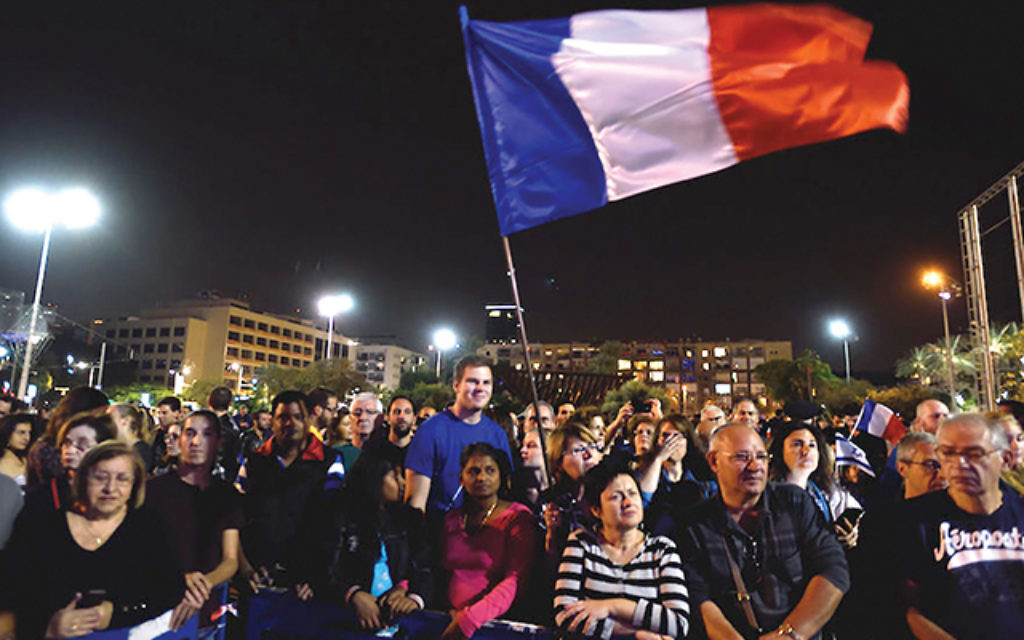 Tel Aviv — “We understand more than anyone else,” read the decoration on the memorial candle outside the French embassy here.

The red, white and blue of France’s tricolor flag lit up the Tel Aviv municipal building in Rabin Square as well as the walls of Jerusalem’s Old City.

Prime Minister Benjamin Netanyahu declared that Israel stands “shoulder to shoulder” with France, and President Reuven Rivlin declared that “we stand united” in the fight against terrorism. Opposition leader Isaac Herzog added, “Evil knows no borders and only courageous and decisive cooperation among the family of nations will make it possible to eradicate it.”

Amid the shock and revulsion over the Paris terrorist attacks in Israel, there was guarded hope that the new focus on national security and counterterrorism in Europe would spur more understanding in a relationship that has become heated over the policy toward the Palestinians.

“I wouldn’t want anyone to experience this,” said Ron Ben Nun, a 29-year-old industrial designer, as she stopped to snap a picture of the memorial candles and flowers outside the embassy. “I would like to support them, so those who are rational can get over this problem of radical Islam together.”

But alongside expressions of sympathy and condolence, there was a healthy dose of official indignation toward Europeans who are seen by many as blinded by loyalty to upholding civil liberties at all costs, naive about the threats of Islamic extremism and biased against Israel’s handling of the Palestinian conflict.

Still outraged from a shooting attack in the West Bank that killed two Israelis, Netanyahu on Sunday called on the international community to be more forceful in condemning Palestinian terrorists. “We are not to blame for the terrorism directed against us, just as the French aren’t to blame for the terrorism against them,” the prime minister said.

Other Israeli politicians from the governing coalition were less diplomatic, saying that Europeans should spend less time criticizing Israel and more time cooperating with Israel in fighting Islamic extremism. The Israeli frustration was enhanced by the decision of the European Union last week to require that consumer products from Jewish settlements in the West Bank carry special labels noting their origin in the “Israeli settlements” rather than a “Made in Israel” sticker, a move that has stoked fears of a countrywide economic boycott.

“Europe needs to stop dealing with nonsense of labeling of Israeli products and automatic condemnation for every balcony built in Jerusalem,” said Science Minister Ofir Akunis in an interview with Israel Television. “We are under an Islamic fundamentalist terror offensive. Terror is terror is terror.”

The Paris attacks and the French efforts at cracking down on Islamist militants gave Israeli government ministers a convenient window of opportunity on Tuesday to implement a decision from last month outlawing the northern branch of the Islamic Movement, an Israeli-Arab group with ties to the Muslim Brotherhood and, allegedly, Hamas. In an unprecedented step against a minority group, Israeli police raided the movement’s offices throughout the country, confiscating files and equipment.

“The Paris attack created the international and regional atmosphere that justifies and gives legitimacy to such an exceptional and severe move like this,” wrote Udi Segal, a political reporter for Channel 2 news.

Israeli politicians want to convince the world that Palestinian terrorism is one and the same with the global jihadist militants who struck in France, said Tal Schneider, an Israeli political journalist. “Israel wants the global community to see Palestinian terror as part of a global trend of terrorizing citizens,” she said. “They don’t want it to be seen as part of a 70-year-old conflict.”

That explains Israel’s diplomatic outrage after the Swedish foreign minister, answering a question about Islamic radicalism in Europe, linked it to the situation in Middle East, “where not least the Palestinians see that there is no future.” Israel’s foreign ministry summoned the Swedish ambassador in protest, saying that “any link between ISIS terrorism and the Palestinian problem is baseless.”

Although the Paris attacks have become a seminal moment for Europe in grappling with fundamentalist Islamic violence, it’s unlikely that they will substantively change European policy toward the Israeli-Palestinian conflict.

“Some in Israel may hope that the events in Paris will add to Europe’s understanding of the constraints involved in coping with Palestinian terrorism, and help ease pressure on Israel and mitigate the criticism voiced in this context by various EU institutions and member states,” wrote Oded Eran, a former ambassador to the EU, and Adam Hoffman, on the website of a Tel Aviv University’s Institute for National Security Studies, where both authors are researchers. “Similar events in the past, however, indicate that this will not occur, and that no significant change in the European attitude on this question can be expected.”

But even if France’s diplomatic position doesn’t change toward Israel, a French Jewish leader said he expected there to be better understanding of the need to combat Islamic extremism. “The French didn’t realize it until now; now they understand it’s not just Jews, or journalists, but a worldwide war that Islam wants to wage against all those who don’t believe in sharia and their way of life,” said Roger Cukierman, vice president of the World Jewish Congress and the president of the French council of Jewish institutions, in an interview with Israel Radio.

Unlike most of their countrymen, Cukierman told the radio that French Jews were used to dealing with terrorist attacks directed at their communities. “This isn’t something new to us. But now it’s not only us.”

In January, when French terrorists targeted a kosher supermarket, Israeli officials encouraged French Jews to consider Israel their true home and immigrate. Top officials at the Jewish Agency said they anticipated that annual French Jewish immigration could jump this year to 10,000 from 7,238 in 2014. The actual figure through the first 10 months of the year is 6,860, suggesting the initial forecast might have been overstated.

At a sushi restaurant in Tel Aviv, two recent young French immigrants predicted that the attacks wouldn’t change much for the Jewish community back home.

“We are always afraid in France. There’s security guards and we know there’s danger,” said Sophie Ben Haim, a 22-year-old student in a Hebrew-language studies course.

She and a friend, François Cohen, agreed that the French politics would become more hardline because of the fear of new attacks and suspicions toward the country’s Muslim community. Despite the new sense of shared threat from terrorism with their countrymen, French Jews will keep immigrating to Israel, they predicted.

“Jews don’t feel at home there,” Ben Haim said. “I don’t have things in common with French people. There’s no future in France. Here, there is a future.”