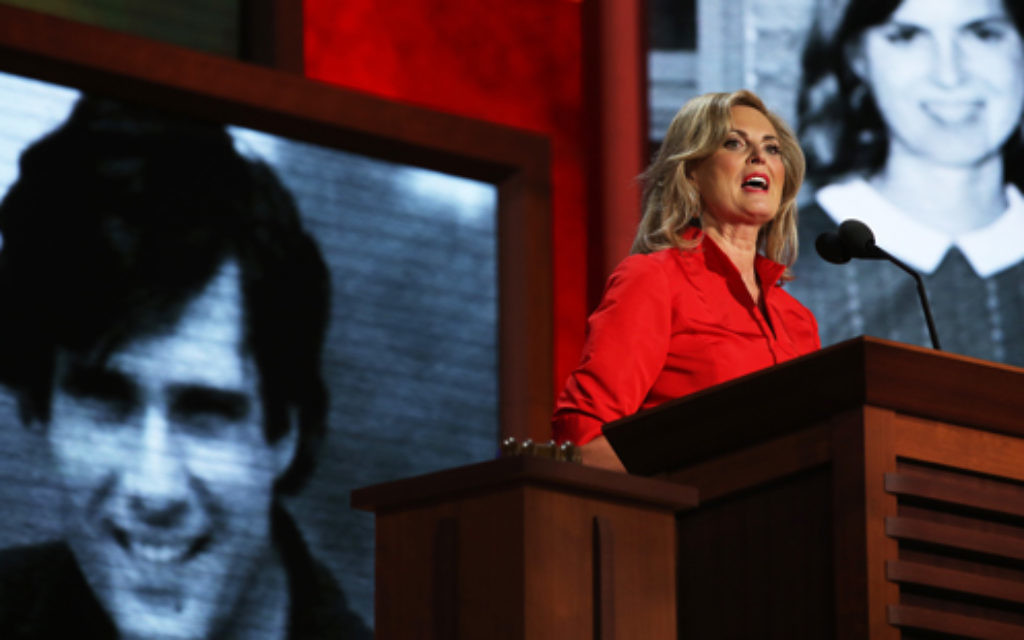 Tampa — Delegates who watched Ann Romney’s speech to the Republican National Convention here Tuesday night were still talking about her speech the next day, saying she had won over with her audience not just by the words she spoke but by her enthusiasm and down-to-earth approach.

“She was real,” said Joe Mondello, chairman of the Nassau County Republican Committee. “She connected with women — and hopefully it will be enough [to close the gender gap Barack Obama currently holds with women].

She didn’t come across like a political wife. She had to humanize her husband, and it is now up to him to carry the ball.”

Former New York Sen. Al D’Amato said Ann Romney’s speech “made it possible” for her husband to “close the gender gap significantly.” And he too used a sports analogy to describe the impact of her remarks.

“Mrs. Romney did a fantastic job — she’s on base,” he told The Jewish Week. “She’s on second and maybe she’ll be moved as far as third. She won’t be hit home by the vice presidential candidate, but [Wisconsin Sen. Paul] Ryan will do a good job. He’s very bright and articulate. But the only one who can get her home is [Mitt] Romney.

On the convention floor Tuesday, Sid Dinerstein, chairman of the Republican Party of Palm Beach County in Florida, said he was “very optimistic” that Romney would garner 40 percent of the Jewish vote in the county — enough to win the state. That may be wishful thinking, as the latest polls now show President Obama garnering about 68 percent of the Jewish vote, an increase over earlier this year.

Asked about the initial concerns of seniors that they would be hurt by Ryan’s Medicare plan, Dinerstein said the latest polls show that “Ryan’s plan does 20 points better among seniors in South Florida.”

Dinerstein said many liberals who voted for Obama four years ago tell him they plan to stay home this year, which increases his optimism that a strong Romney turnout could make a difference.

Jay Goldfarb, an alternate delegate and co-chairman of Republicans of Palm Beach County, said the Republican Jewish Coalition would soon be launching a major “grassroots” outreach in Florida, Pennsylvania and Ohio that would involve television ads, phone banks, sign waving and the distribution of campaign literature. Such an effort is expected to have a significant impact among Jews in Florida, he said, where home values — the largest asset of most families — have dropped about 50 percent during the Obama years.

“I’m very optimistic,” Goldfarb said. “I see a lot of change. Personally, four or five friends of mine have come over [to Romney]. We have a CEO and a CFO running for president and people recognize that for the sake of this country we need a businessman. We can’t continue with the kind of debt we are running up.”

Goldfarb then looked up to the large “debt clock” hanging on a wall of the convention hall.

“It’s about $16 trillion of debt,” he said. “It’s frightening and people are listening because they are afraid of their retirement funds.”

The job of Republicans is to “reassure retirees that there is nothing to worry about from a Romney presidency because it will strengthen and not weaken their Medicare and Social Security.”

Tracy Winkler, a Ohio delegate from Cincinnati, said that until recently she believed the race in her area was going to be close.

“But now I’m hearing more frustration with the economy and I believe our [Hamilton] county will definitely go to Mitt Romney. More and more the push is there among people who voted for Obama in the last election and now say their vote will go to Romney. I don’t hear people saying they voted for [Sen. John] McCain last time and were voting for Obama this time.