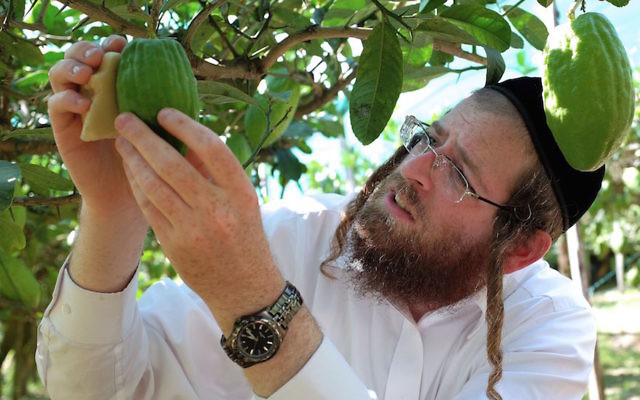 JTA — Fifty years ago, leaders of the Chabad movement tasked Rabbi Moshe Lazar of Milan with supervising the local production and export of the Calabria etrog, the citrus fruit used by Jews during the harvest festival of Sukkot.

Lazar’s job is to make sure the fruit is kosher for the festival, and that local farmers aren’t cutting corners or using unkosher techniques to boost the yield and their profits for what already is Italy’s most lucrative citrus product.

This year Lazar, now 83, has to be particularly vigilant. A winter frost destroyed 90 percent of this year’s crop, creating the worst shortage he has seen in Calabria etrogs, which are named for the southern region where they are grown. Italy is one of only three major exporters of the fruit along with Israel and Morocco.

Prices for the kosher fruits, which in normal years can easily fetch $200 ahead of Sukkot, have doubled and tripled, making Chabad communities around the world – who strongly favor the Calabria variety – fear that they will not be able to afford or obtain a specimen to call their own.

The shortage could also tempt unscrupulous or careless farmers.

Due to the shortage, Lazar this year is picking fruit he would have deemed too homely for export in normal years, just as long as the fruit is technically kosher. To be considered as such, an etrog must at least be egg-sized, yellow, elliptical, intact (including its woody stem, or pitom) and possess a tough peel.

But even using the grade B produce, “there are not going to be enough Calabria etrogim to go around this year,” Lazar said.

That’s bad news for Chabad communities all over the world ahead of Sukkot, which this year begins on Oct. 4. Etrogs are among four species of plants that Jews purchase for the holiday, which is also known as the Feast of Tabernacles.

In the Ukrainian city of Odessa, Rabbi Avraham Wolff’s congregants are trying to buy a single Calabria etrog for $500 via a Judaica shop in the United States.

“We’re worried that even at this high price we won’t be able to get one this holiday,” Wolff told JTA. “So a few of the patrons of the community got together and decided to open a fund to make sure we have enough money, cost what it may, for at least one Calabria.”

In previous years, the community bought five Calabria etrogs for Sukkot to be shared by Chabad institutions in Odessa, where some 50,000 Jews live. (Under Jewish law, Jews must “possess” an etrog during the festival, but a loophole allows them to be shared as “gifts” among several people. The fruits aren’t eaten, but carried and held at various points during worship.)

Other communities are able to cut out middlemen by buying the fruit directly from the farmers for about $50 apiece in normal years. This year, etrogim are being sold to end consumers for as much as $350 when, according to Lazar’s son, Berel, who is a chief rabbi of Russia. Berel Lazar travels to Calabria each year to pick etrogs from orchards and bring them back to Russia for distribution to communities across the former Soviet Union. The younger Lazar charges congregants only what he pays the farmers.

The day after Sukkot, the price of etrogs drops to $1 a pound, Berel Lazar said. Locals use the fruit to make jam and in the soap industry.

The yield on Calabria etrogs, which are also called yanover etrogim because they used to be shipped from the Italian coastal city of Genoa, makes the fruit an irresistible target for manipulation, Berel Lazar said.

Some growers attempt to increase their margins at the expense of the strict kosher standards that Moshe Lazar has enforced for 50 years. One trick is to secretly graft the relativity vulnerable etrog tree onto the trunk of a hardier citrus tree, rendering it more robust but non-kosher. A cruder ruse involves gluing fruits and branches from a non-kosher tree onto a kosher one.

And while there is an atmosphere of “friendship and mutual respect” between the local farmers and the small team of supervisors working with Moshe Lazar, “sadly there is not a relationship of trust,” Berel Lazar said. He noted that the lucrative etrog trade has not escaped the attention of the Italian mafia, which he suggested may be pressuring farmers to try to pass off non-kosher etrogs as kosher to increase profits. 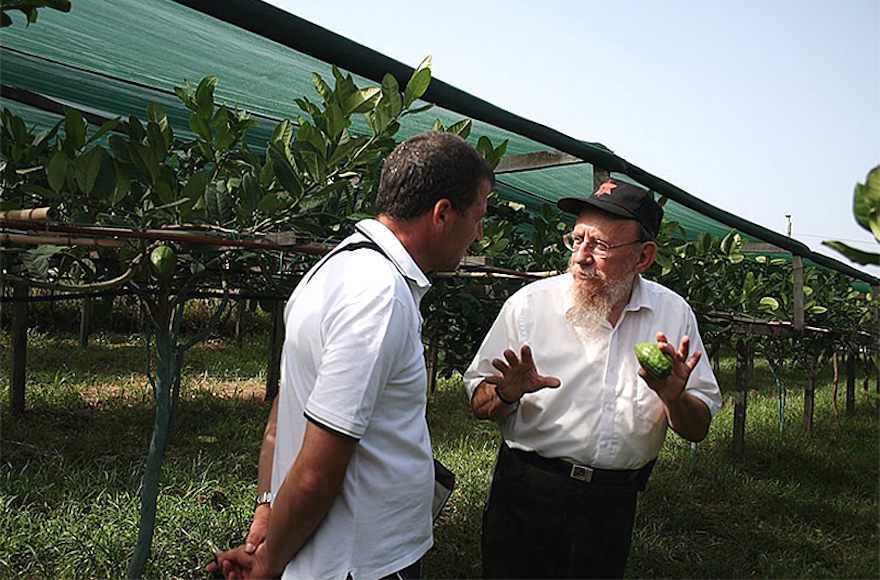 Moshe Lazar, right, explaining to a visitor at an etrog orchard in Calabria in 2015 about how to pick kosher fruit. (Esrogim.info)

Although etrogs are grown in Israel, Morocco and even the United States, Berel Lazar says that the Calabria etrog is “clearly and visibly superior” to those strands – including fruits that grow in Israel on trees descended from Calabria groves. But to Chabadniks, the preference for Calabria etrogs is also based in scripture.

According to Chabad traditions, the Talmud, a central text of Judaism, suggests that God bequeathed southern Italy to Esau, Isaac’s firstborn and inheritor of “earth’s richness,” as he is designated in the book of Genesis.

“This means Calabria etrogim come from the richest soil, making them the best,” Berel Lazar said.

The shortage has Berel Lazar this year is sticking to a quota of 300-500 fruits for Russian communities — a mere fraction of the yield in normal years, when tens of thousands of etrogs leave the orchards of Calabria’s approximately 100 etrog farmers ahead of the Sukkot holiday.

“I can’t pick as many as I want and send them all to Russia when the rest of the world is left without,” he said.

Virtually all Chabad communities eagerly await the Calabria etrogs, and demand is especially high where the movement has many followers — primarily in Israel, France, the United States and the former Soviet Union.

Moshe Lazar said he predicts the Calabria orchards will recover fully within a year or two, making the shortage a very “temporary difficulty.”

But not a new one, his son noted.

“Hasidic tradition has many stories of Russian cities where Jews struggled to find an etrog for Sukkot,” Berel Lazar said. “This year we are reliving also this tradition.”