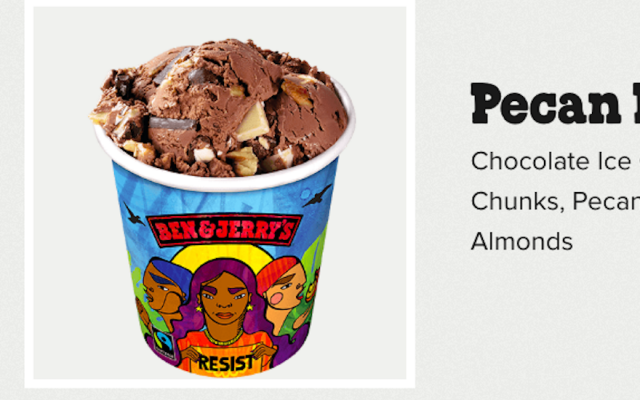 (JTA) — In this dire time, as the Jewish community is still recovering from the brutal massacre of 11 Jews at a synagogue, some pro-Israel activists on social media have discovered the true foe of the Jewish people: Ben & Jerry’s.

We have met the enemy, and it is ice cream.

Specifically, these defenders of the faith are complaining about the Vermont ice cream company’s newest novelty flavor: Pecan Resist (a play, I think, on “we can resist”). Ahead of the midterm elections, the flavor is a tribute to various liberal activist groups that have led the grassroots opposition to the Trump administration. The drawing on the container features a trio of women of color holding a sign and protesting.

But some people are upset because proceeds from the flavor are going to a group of activist organizations, including Women’s March. Women’s March, which organized mass protests in cities worldwide on the day after President Donald Trump’s inauguration, aims to empower women to become politically involved in liberal causes.

Some pro-Israel and Jewish leaders, however, have criticized the group. One of the co-chairs of Women’s March is Linda Sarsour, a Palestinian-American liberal activist who supports the movement to boycott Israel and has made disparaging comments about Zionism. In addition, another co-chair, Tamika Mallory, is a vocal supporter of Louis Farrakhan, the virulently anti-Semitic Nation of Islam leader.

Sarsour’s Jewish defenders point to her history of working with Jewish activist groups on the left, as well as her active support and fundraising for Jewish communities in the wake of tragedy. Ben and Jerry’s posted a photo of a group of activists, including Sarsour, when announcing the flavor.

We are proud to announce that our newest flavor, Pecan Resist, supports the important work of @netargv, @womensmarch, @ColorOfChange, and @HonorTheEarth. Join them here >> https://t.co/b7mu4tVPYE pic.twitter.com/8fFJ6vL3vF

That didn’t sit well with some denizens of social media. Yoav Aliasi, an Israeli rapper and far-right activist, called on his followers to boycott Ben & Jerry’s because of the decision. His post has garnered 2,800 reactions and more than 1,400 shares.

“Ben and Jerry’s, the American Jewish ice cream producers, decided to name their new ice cream after a ‘Palestinian’ terror supporter named Linda Sarsour, who has become a symbol of anti-Semitism and hatred of Israel (a darling of the media and the American left),” Aliasi wrote.

Some of the replies to the Ben & Jerry’s tweet also expressed outrage at the choice.

Just days after the worst anti-Semitic attack in US history, you honor a racist and anti-Semite who publicly told people not to "humanize" Israelis, and who stated that she was honored to share a stage with a convicted murderer of Jews? Are you crazy? #antisemitism #Jewish #News

Ben & Jerry’s responded by thanking one critic for the feedback but standing by the decision.

“We may not agree on everything, but the work that Linda has done to promote women’s rights is undeniably important and we are proud to join her in that effort,” the tweet said.

Thank you for your respectful feedback. It's appreciated. We may not agree on everything, but the work that Linda has done to promote women’s rights is undeniably important and we are proud to join her in that effort.

The other nonprofits that will benefit from the flavor are Honor the Earth, a Native American-run environmentalist organization; Color of Change, an online racial justice organization; and Neta, a media organization run by people of color on the Texas-Mexico border.

This isn’t Ben & Jerry’s first foray into politics via frozen deliciousness. In 2016, it created a flavor called “Empower Mint,” with peppermint and chunks of fudge. In 2015, the company’s founders, Ben Cohen and Jerry Greenfield, endorsed Vermont Senator Bernie Sanders for president.

The Israeli arm of Ben & Jerry’s said it won’t be selling the flavor, and said it doesn’t get involved in U.S. politics.

“Ben & Jerry’s Israel is an independent and blue and white [Israeli] company,” Ben & Jerry’s Israel said on its website. ” We don’t have anything to do with the decisions of the international brand and we don’t interfere with local politics. It is important to mention that we do not intend to market [Pecan Resist] in Israel. We will continue to do and act for the community and for the company in Israel.”