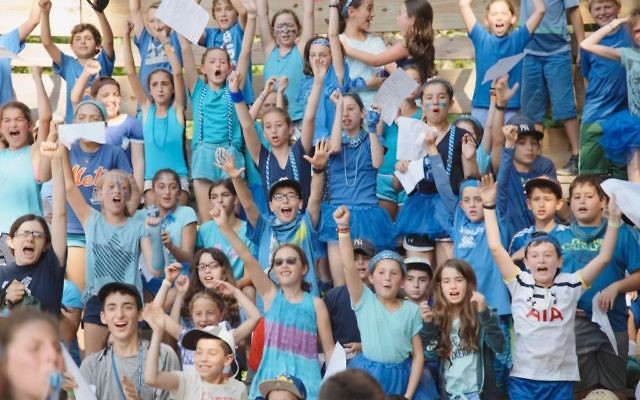 Kids at Camp Ramah in the Berkshires. (Courtesy Foundation for Jewish Camp)

People with disabilities have had Jewish camping options since the early 1970s. The Tikvah program, beginning in 1970 in Glen Spey, New York before moving to Camp Ramah in New England, was the first attempt at inclusive Jewish camping. The Tikvah model is a semi-inclusive camp within a camp model. A year later, Camp HASC opened–seemingly the first Jewish, self-contained camp for children with disabilities. Over the years the options have continued expanding. A 2013 study demonstrated both the growth of Jewish options for campers with disabilities, and the satisfaction those experiences provide both campers and their families.

Despite these results, many parents of children with disabilities remain hesitant to explore Jewish camping opportunities. I believe they are unsure of the benefits of Jewish camping as compared to specialized non-sectarian options. This is why I’ve chosen to share my story. Although my experience, like any individual experience, is unique, I hope it sheds light on opportunities distinctively available through Jewish camping, relieving lingering hesitation among some currently “on the fence.”

My first three years at sleep-away camp were awful. Not every camp is right for every camper. Luckily I kept trying because during my fourth summer, I finally felt I hit the camping jackpot, with Camp Oakhurst operated by New York Service for the Handicapped, an agency of UJA Federation of New York. Despite this affiliation, Oakhurst is not – nor ever claimed to be – Jewish. It is proudly a non-sectarian camp, which did not bother me at all during my four great years there. While at Oakhurst, I learned I could play baseball, not just be a spectator or an umpire. I became a better swimmer. I enjoyed the activities and I made friends. In short, it was a great experience.

However, my feelings changed after my fourth summer. During the previous winter, my bunkmate died from disability-related complications. Ironically, it was only then that I realized that while Oakhurst accommodated our needs excellently, creating the most barrier-free environment many ever experienced, our disabilities remained major conversation topics. Bunkmates often compared surgeons, therapists, and other realities related to our disabilities. I couldn’t shake the feeling that at Oakhurst, our disabilities were all that united us. Or put another way, our camaraderie derived from who we weren’t, rather than who we were.

After expressing the desire to attend Camp Ramah, my parents explored Camp Ramah in New England, both because of its reputation regarding campers with disabilities, and because of my family’s impending move to Massachusetts, where many Ramah New England campers lived. However, the highly successful inclusion now in place didn’t exist at that time. The administration insisted I enroll in the Tikvah program and live in a special bunk for people with disabilities. While the Tikvah Program successfully served participants with intellectual and developmental disabilities, my disabilities were primarily physical in nature.

Whether or not someone has a disability, even if Jewish camp is a priority, choosing an option you know is a bad fit can be disastrous. Tikvah was and is an exceptional, groundbreaking program—but it was not at the time designed in a way to accommodate what my family, and I thought was best for me. We believed the most meaningful experience for me, would be an integrated experience with my typically developing Jewish peers. At the time, Camp Ramah in New England was not comfortable with such a setup. So despite the fact that, the camp continues to grow, and evolve, now offering an integrated option, which I strongly believe should be among the spectrum of options, a project I’m proud to have contributed, and may very well be among what is a greater number of options and am move away from one size fits all philosophy, that was not the case at the time. The experience taught me that there is no one ideal camp for all campers, and parents and campers must trust their respective “guts” after proper research.

Once at Ramah, I experienced the uniqueness of a Shomer Shabbat experience, something different than my practice at home. Over those long summer Shabbatot, I not only played board games with my bunkmates, I began exploring the intersection of Judaism and disability during in-depth conversations. The intersection remains a personal passion to this day.

At Ramah, division head Meredith Englander (now Meredith Polsky, who went on to found Matan, an organization dedicated to an inclusive Jewish community) asked me to speak with her young campers and her staff about living with a disability – hence developing another life-long passion of mine. For the first time, away from my parents’ protection, I saw the ignorance of many within our community about disabilities. At Ramah I discovered my own perspective as a person with a disability, which provided an opportunity to both learn from, and teach, those around me. At Ramah, I learned I could fight communal ignorance. This too began a lifelong passion.

My Jewish camp experience positively changed the trajectory of my life. Additionally, three years later, many of my Ramah bunkmates wrote collage application essays about our experiences together, proving this was a transformative experience beyond me personally. However, suggesting that all went smoothly would be untrue. The difficulties, particularly that first summer, revolved more around the transition from the self-contained environment of Camp Oakhurst to the non-disability oriented environment at Ramah.

I had wonderful counselors who did the “dirty work” and bunkmates who, to the best of my recollection, did what they could to make me feel like I was an important part of the bunk, the Adah (division), and Camp. From the first day at camp and throughout the summer, they made me feel that I was not a burden, or any different then my peers.

My Ramah story wouldn’t be complete without acknowledging the enormous role that my division head, David Englander (now a Rabbi in Boca Raton, FL), played in my success at camp. His demeanor, great listening skills and even keeled leadership style, even when nothing went right, were instrumental to my experience.

As a camper at a Jewish camp I grew as a person, discovered my passion, connected to my community and positively altered the trajectory of my life. In the 25 years since my first summer at Jewish camp, Jewish options for campers with disabilities have grown exponentially. Finding the right fit is easier then ever. You owe it to yourself and to your child to at least fully explore the possibility.

Jason Lieberman was diagnosed with cerebral palsy spastic diplegia at the age of 11 months. He finally came to terms with his disability in the eighth grade and began running sensitivity training programs for his teachers and fellow students. While an undergraduate student at the George Washington University, Jason seriously began exploring the relationship between the two communities in which he was a part, the Jewish community and the disability community. In 2013, Jason was named one of the New York Jewish community’s 36 Under 36 by the New York Jewish Week, a list of 36 young leaders in the New York Jewish Community who have dared to challenge conventional thinking and follow their inner compass. He continues to be a sought-after public speaker, who has spoken in various venues throughout the United States and abroad for over 15 years. He lives on the Upper West Side of Manhattan in New York City with his wife Emily and son Ruby.