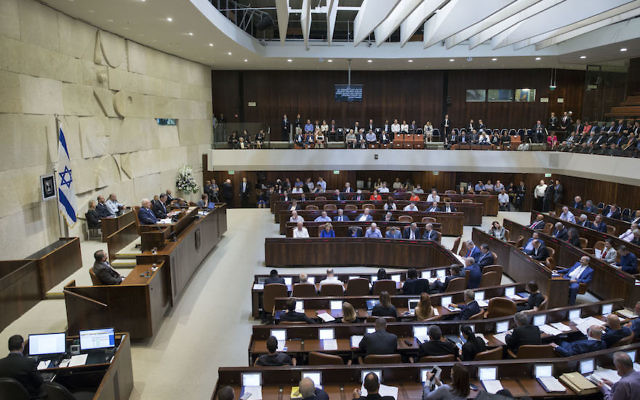 Yedidia Stern, an eminent and widely respected professor of law and vice-president of the Israel Democracy Institute, argues in his Opinion column, “Why The Proposed `Basic Law’ Is Bad For Israel” that the proposed law favors particularist values at the expense of universalist ones.  This is wrong and the reasons he cites are fallacious.

The truth is that Israel needs this law because it has a constitution which leaves it out. That Israel has a constitution and a bill of rights is taught in every law course in the country. This constitution was self-proclaimed by the Supreme Court in the early 1990s when the Court transformed “basic laws” into constitutional provisions; those provisions now basically require the nullification of Knesset laws deemed by appointed judges to be in conflict.  Before this judicial revolution, “basic laws” were regular laws labeled as such merely to mark them as sources to be used by the Knesset when formulating and enacting a written constitution.

The new basic law does not subordinate the Basic Law: Human Freedom and Dignity, as Professor Stern claims. This is explicitly clear by the terms of the law and by its accompanying official explanation.  Since 1995, Israeli law has required that all legislation must be interpreted in the light of the existing Basic Law: Human Freedom and Dignity, so the argument that the new law would subordinate universal values to particularist ones is misplaced. To the contrary, the new law, when added to the existing basic laws (as the law provides), would put both on an equal plane.

The Basic Law: Human Freedom and Dignity has been expanded by Court decisions for decades, sometimes at the expense of the Jewish national character of the state.  Professor Stern states that the idea that Israel is the national home of the Jewish people is supported by “most Jews in Israel” “with every fiber of their being.”

This is true of most, but the minority against this concept includes a good part of the influential elite in Israeli society, including leaders of academia, business, media, and judges. I hope Professor Stern’s optimistic appraisal includes his own organization, because when the Israel Democracy Institute and the Institute for Zionist Strategies presented their draft constitutions to the Knesset about ten years ago, the Democracy Institute vigorously opposed the provision that “Israel is a Jewish State and the National Home of the Jewish People.”  This opposition was not mitigated by the fact that both drafts included robust bills of rights.

According to a comprehensive and well received study published by Dr Aviad Bakshi, the legal character of Israel as the nation state of the Jewish people has been seriously undermined by numerous Supreme Court decisions resulting from its own, imposed constitution.  This, in part, because there are ten basic laws promulgating democratic procedures and values, and not one promulgating Israel as Jewish state.  The phrase in the 1992 law characterizing Israel as a “Jewish and democratic” state, in which Prof. Stern takes comfort, is declarative only and has no substantive content or implementation.

The specter of religious coercion raised by Prof Stern is a red herring.  Nothing in the law allows such coercion and none of its supporters would countenance it.  Indeed, the strongest opponents of the bill could be the charedi leaders and their religious establishment.

I am a democrat through and through, raised, educated, and informed by democratic principles and ideas.  I do not want democratic rights subordinated to nationalist ones.  But neither do I want nationalist values overwhelmed by universalist ones, which is what we have today — a predicament vigorously advanced by the media, judges and professors.

A healthy and necessary balance between particularist and universalist principles would be re-established by the nation state law, not broken by it, as Yedidia Stern claims.  Aviad Bakshi’s study demonstrates that there was a healthy balance in the past before it was eroded by judges who made law.  This balance will be reconstituted with the new Knesset legislation.

The Basic Law: Israel, the Nation State of the Jewish People would not have been controversial 25 years ago, and the fact that it is now, only proves how necessary it has become.