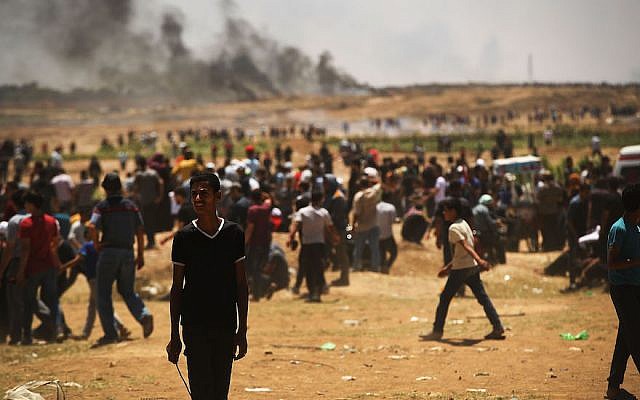 Thousands of Palestinians stand along Gaza’s border fence with Israel during mass demonstrations, May 14, 2018. JTA

Israel and Hamas, the terror group that controls Gaza, are back in ceasefire negotiations after narrowly avoiding a violent engagement in the last week of March, centered around the anniversary of Gaza’s Great March of Return protests.

But while the Egyptian-mediated negotiations are progressing, with the Gaza-Israel border mostly quiet, not many are confident that a deal will be reached after more than a decade of previous failures and three Israel-Hamas military engagements — in 2009, 2012, and 2014.

Another war may have just been delayed, rather than avoided altogether.

Current ceasefire terms, in which Israel eases its blockade of Gaza and works on energy initiatives in exchange for calm on the border and concessions to Hamas prisoners in Israeli jails, have already been agreed to multiple times in the past.

“This is a repeat,” said Gershon Baskin, the Israeli peace activist who helped negotiate with Hamas to free captured soldier Gilad Shalit in 2011. Negotiations tend not to move beyond Israel’s re-opening of border crossings and extending of the Gazan fishing zone.

“Then Israel closes it in again,” he said. “The problem is, Israel is not going to implement the deal of easing the siege on Gaza without the return of the bodies of the soldiers and the two Israeli civilians.”

The soldiers were killed in the 2014 Gaza war and taken by Hamas, while the civilians, both mentally ill, had entered Gaza on their own. Hamas has been using the captives as leverage for another prisoner exchange similar to the one that freed Shalit. More than a thousand Hamas prisoners were freed by Israel, which many Israelis consider too high a price to pay.

“I see this as a kind of bone-in-the-throat issue which is stuck,” Baskin said. He is frustrated that Israel and Hamas only speak indirectly through Egypt, and that the prisoner-body exchange is part of the conversation at all.

“The whole idea of negotiating over dead bodies is horrific, it’s not human,” he said. “It’s ridiculous. But this is part of our absurd reality.”

If the ceasefire negotiations aren’t expected to be successful, why did both sides de-escalate in the last days of March? Simply put, neither side wants war.

“It was not surprising for us to expect this hold-back from both sides,” said Isaam Adwan, a Palestinian activist in Gaza. “The Palestinian collaboration in Gaza (especially Hamas) is not capable of handling a new war with Israel. The situation is already bad after three deadly wars.”

“On the other hand,” he said, “Israel is holding new elections, which can’t tolerate another war and terror in the area. But it’s a matter of fact that Israel has never fulfilled any commitment to lift the blockade imposed on Gaza.”

Baskin agrees that the military option for both Hamas and Israel have been exhausted. But unless the prisoner-captive negotiations reach a deal, and the Gaza blockade is significantly reduced, both sides are inevitably headed towards another confrontation.

“I feel helpless and hopeless very often being trapped in this cycle of unknown future,” Adwan said. “Being caged in Gaza and deprived of fundamental human rights is something we can’t endure for the coming years.”

Most Israelis would insist that Gazans feel trapped because Hamas leaders care less about taking care of their people than they do seeking to destroy Israel.

While Israel’s obstacle is a too-generous prisoner exchange, for Hamas it’s the poor state of Gaza’s economy.

For years, “Israel tried to dictate a simple policy of no violence for no violence,” according to Giora Eiland, a retired career soldier who helped implement Israel’s disengagement from Gaza in 2005 as head of the National Security Council. “In other words, a complete ceasefire; you will not shoot at us and we will not shoot at you.”

But Israel’s version of a complete ceasefire still leaves a deteriorating Gaza with only a few hours of electricity each day, little clean water, and 70 percent youth unemployment.

If Israel were to grant real economic concessions to Gaza, and work with Hamas to do so, there would be more incentive to keep calm in the region, Eiland said. Though Hamas has a “very extreme ideology” against Israel, he believes they’re far more motivated by the economy, without which there won’t be a Gaza to govern.

“The Israeli willingness to give something to the other side is too small” in current negotiations, he said.

“We do not create enough space between the sticks that they suffer if [Hamas] shoots, with the carrots that they can eat when there is a complete cessation of violence,” Eiland said. “As long as this is the situation, we cannot reach any kind of stability.”

Lev Gringauz is an American journalist studying in Israel this year.