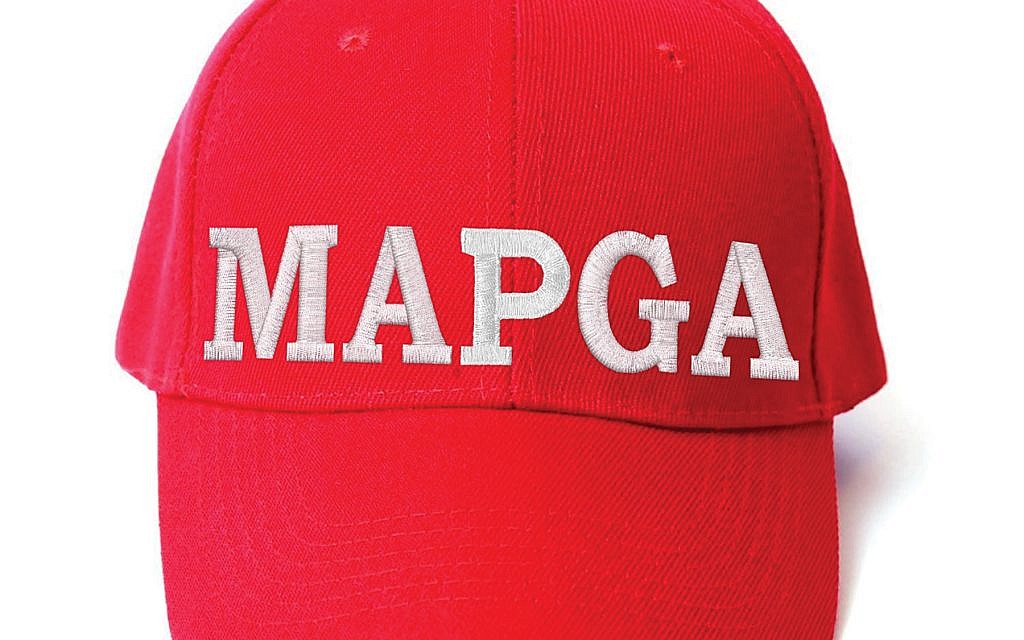 Capping off a career: A run for the top. Photo illustration by Chuck Rosenthal/JW

As my Bubbe used to say in Yiddish, “Don’t be the last horse out of the barn.”

So I’m proud to announce here today that I plan to run for president of the United States and if elected, I will … demand a recount.

No, seriously, my friends, I have observed the chaos and confusion that is America today and thought, could I do any worse? As we watch our political parties move further left and further right, is there no sane candidate to claim the middle? Not yet.

So it is with true humility that I pledge to “Make America Pretty Good Again.” (Baseball caps that read MAPGA are now available at no discount.)

And I ask you, friends, as Democrats, Republicans and Independents, isn’t “pretty good” enough?

To paraphrase the immortal words of JFK, “Ask not who I am or what I’ve done. Ask who I’m not and what I haven’t done.”

The mere fact that I have never worn shoe polish in public or (knowingly) harassed a child, or even a man or woman, should qualify me for the Oval Office. Or at least as governor of Virginia.

As a journalist in Jewish media for decades, I am pleased to note that I have been an equal-opportunity offender. There is no denomination that has not been upset with something I have written or edited. And yet after dealing with Jewish communal and religious organizations and leaders for so long, I take pride in the fact that I am still not a complete anti-Semite. (Please hold your applause until the end.)

But enough of who I am, ladies and gentlemen, let me take this opportunity to tell you more about who I’m not.

I am not a billionaire. Indeed, I feel sorry for them these days, fearing that if AOC has her way, they will be taxed more than 70 percent. Just think of it. Dear Lord, if that ever happened, Michael Bloomberg and Howard Shultz would be reduced to something like $80 billion between them — maybe 90…

I admit at the outset that I am not a woman running for office. I know it might help my chances if I were, and I do admire women. I can tell you that my mother and grandmothers were women and I am married to a woman. And if elected, I pledge to have token women appointed to several secondary positions in my cabinet. (Satisfied now, gals?)

Let me be clear: I have never said I was an American Indian, though I do like the Redskins and root for Cleveland when they play the Yankees.

And though I admit I have lived in New Jersey and am still on speaking terms with America’s Rabbi, I have never been the mayor of Newark or smilingly posed for a photograph with a group holding a sign that said: “Free Willy – and Palestine.” (Though if I had, I would say that it was photo-shopped. Or that I thought “Palestine” was the name of a captive whale. Or both.)

I’m not a Clinton Democrat. Which means: people enjoy my presence (like Bill, not so much Hillary), and I keep my pants on (like Hillary, not so much Bill).

I am not a progressive Democrat. That is to say I don’t check the latest polls before deciding how much I support Israel.

I’m not a Wall Street Journal Republican, worrying more about my own investments than whether our country is going down the tubes.

And yes, I admit, I’m not a True Trumper.

I have never dyed my hair, lied more times a day than I breathe or imitated Alec Baldwin when I speak. What’s more, if elected I wouldn’t watch talk shows more than half the day and would never collude with anyone from a foreign country. Except maybe Miss Sweden. (No one’s perfect.)

Having observed and learned from our national leaders and would-be leaders, I will tell you this:

I would not build a wall at our Mexican border. In the spirit of our current president, I would build a Mall at the border. Out of steel and coal and wires and stuff. And I would pay for it with American tax dollars and have close family members oversee and run it. Into the ground.

Friends, I share your deep concern about the future of Israel. When it comes to the Israeli-Palestinian conflict, I take a realistic stand. I must acknowledge that the two-state solution is but a dream and the one-state solution would lead to disaster. That is why on my first day in office I would declare the no-state solution.

Under my plan, which I would keep secret even after it is put in place (thank you, Jared, for that idea), I will abolish the concept of statehood altogether when it comes to the Palestinians. I would call the area “A Place For Palestinians To Live If They Don’t Bother Anyone” (thank you, Bibi). And I would call Israel the “Start-Up Zionist Entity” (thank you, Arab leaders and Iran for part of that phrase). The ZE’s borders would be determined by Egged bus drivers who would decide where it’s almost, sort of safe to drive.

As for what to do about other national and international problems from climate control to North Korea, and from Tehran to Brexit (which sounds like Yiddish for throwing up)?

To the chagrin of our Talmudic sages, and following a long line of American politicians, I pledge to “say much and do little.”

So there you have it, friends: Insincerity. Incompetence. And Faux-Humility.

Now can I have your vote? (Cue the applause.)