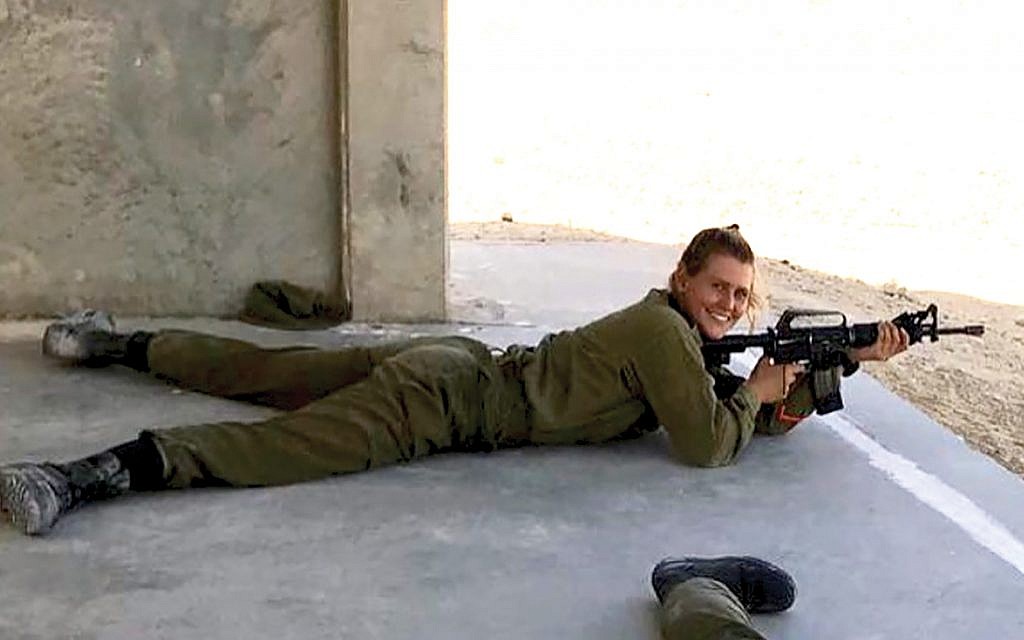 Arms and the woman: The author during M16 rifle training in the Negev. PHOTOS COURTESY LILLI GOTTESMAN DEBODE

It’s 2:45 in the morning. I wake up to a sharp rock jutting into my back. I’m on a hill somewhere in the Negev desert. Though it’s only been 45 minutes since we went to sleep, I notice little red lights — my commanders’ flashlights — bobbing around the campsite. They’re getting dressed. I groan.

Anticipating what’s to come, I leave the cozy warmth of my sleeping bag and tighten the shoelaces on my boots, which I hadn’t bothered to take off before bed. I look over at my fellow soldiers, knowing that in a few moments they’re going to be abruptly awakened by a barrage of merciless yelling. Seconds later, it starts. “GOOD MORNING, EVERYONE. GET UP! TWO MINUTES.” My fellow soldiers shoot up from their mats and begin rolling up their sleeping bags, practically on autopilot. Through their sleepy haze they might wonder what we’re doing, why it has to be done in the middle of the night or why we only had 45 minutes to sleep. However, not one of them will ask why they are there; for Israeli citizens, military service is mandatory. But I’m a U.S. citizen and made the choice to join the Israeli Defense Forces.

Nothing in my background explains why. No one in my family is Israeli. Before enlisting, I didn’t know any Hebrew aside from “shalom” and “glida” (ice cream). Growing up, I attended a WASPy, all-girls high school, followed by four years of studying psychology and political science at Columbia University. I spent my time in college rowing on the Harlem River with the women’s crew team, doing homework and partying. 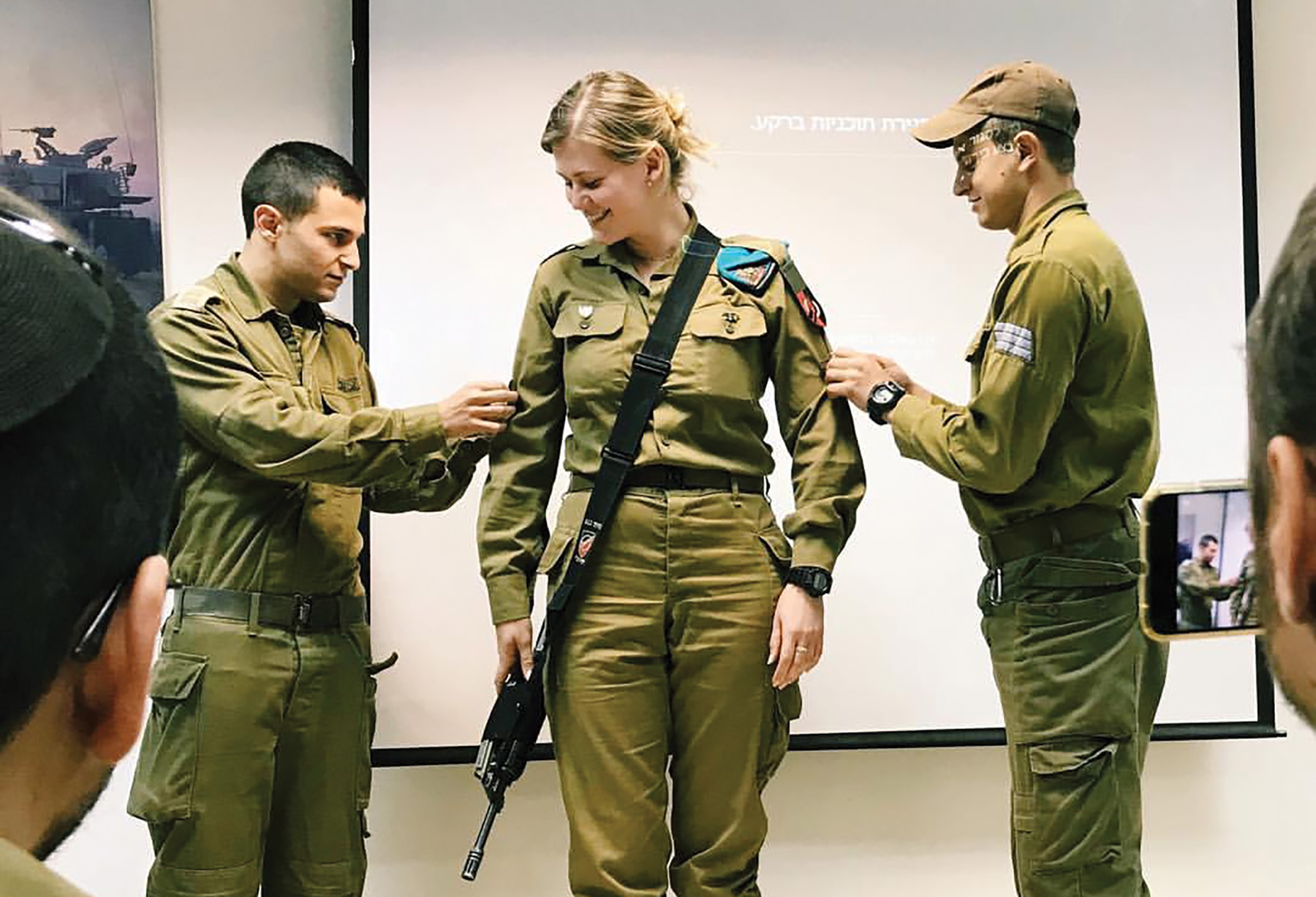 DeBode, a Lone Soldier, is promoted to the rank of sergeant in the IDF.

Yet, 10 days after graduation I was at a military office in Tel Aviv, two massive, black rolling suitcases in tow, waiting to sign the forms that would allow me to officially join the IDF. As a foreigner, I would be a Lone Soldier, the term given to soldiers who have no immediate family in Israel, and whose service is voluntary.

At 23, I’m five years older than most of my fellow soldiers and three years older than my commanders. As we load our equipment into a truck in the pitch black, my friend, Amit, mumbles to me, “Why’d you come here again?” Assuming that, at 3 in the morning, Amit doesn’t want to hear a long-winded explanation, I mutter, “I’m an idiot.”

But it’s a good question. Back in my college dorm room as I weighed my post-graduation options, I came up with so many answers that the harder question seemed to be: “Why would I not join the IDF?”

Reason No. 1: Zionism. I realize this is a trigger word for some, fraught as it is with tricky politics. But Israel is important not only because it’s a land containing thousands of years of Jewish history, but it also serves to ensure the continuation of Judaism. I firmly believe that there is a slight, yet legitimate possibility that the Jewish people will someday need to use Israel as a safe haven — a role that was desperately needed less than a century ago. Unfortunately, Israel cannot exist today without the constant protection of the IDF. Given all of this, I decided to chip in and help defend it.

Reason No. 2: Personal growth.
I thought that military service would help prepare me for “adult life” by forcing me to deal with adversities that could translate to the real world. Will my experiences of being hungry and cold and sleeping outside on rocks in the winter ever come in handy again? I’ll let you know in a few years. But through it all, I’ve also reached a new level of mental toughness. Israel is more, shall we say, abrasive, than America. A year ago, if a stranger — or more likely in Israel, a bus driver — screamed at me, I would spend hours dwelling on it, maybe even cry. Now, I wouldn’t give it a second thought.

Reason No. 3: Hebrew. The opportunity to learn Hebrew factored into my decision as well. I didn’t know how to speak Hebrew when I got here, and now … I kind of do. The aggressive form of language-learning that happens in the army is built on making mistakes and then slowly correcting them until you’re fluent. For a long time I mostly stayed silent, so I didn’t improve as much as I could have. But that’s not the system’s fault. 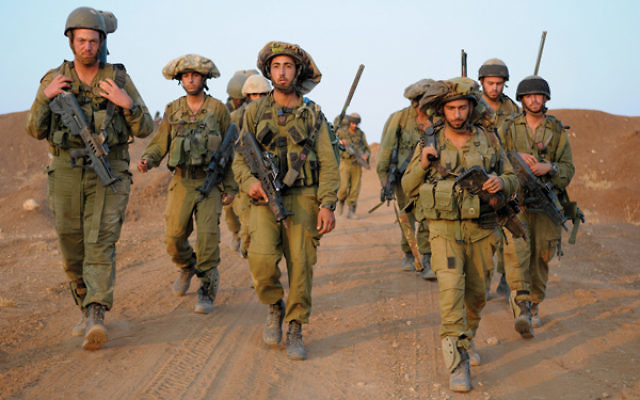 Reason No. 4: It’s badass. Finally, I must confess I was drawn to the grit and general badass factor of the IDF. I chose to be a combat soldier, which, among other things, required that I receive extensive training with an M16 rifle (which I must keep with me at all times), learn how to throw grenades, build a tent in the dark, bivouac in freezing temperatures, kill a scorpion (not a requirement, but it happened), stay awake for 42 hours straight, sprint barefoot on rocks so sharp that I’m astonished there was no blood, run up a mountain carrying a stretcher with a 200-plus-pound man on it and navigate in the dark with just a compass and a map.

I can tell you that despite the hardships of army service, I’ll never regret my decision. In the grand scheme of things, what did I give up? Another year of work? And what did I get in return? Eighteen months of experiences I’ll never have again. I was able to immerse myself in a foreign country, and I got to see how unbelievably grateful Israelis are to Lone Soldiers.

Everyone I explained my story to thanked me and then invited me to Shabbat dinner at their house so I could feel more at home. Even Israel’s gruff bus drivers show that unique brand of Israeli love. As I stepped off the bus the other night, the driver, noticing the Lone Soldier badge on my backpack, smiled and shouted back to me, “You’re not alone; you’re independent.”

Lilli Gottesman DeBode is a combat soldier living in Jerusalem until she completes her military service in early 2019 and returns to New York.