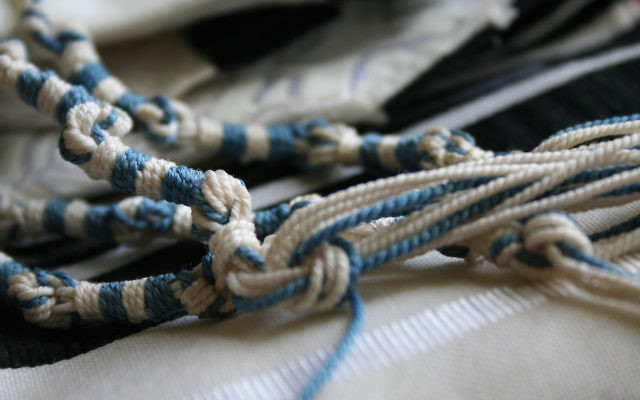 Some time ago I was asked by the president of my local partnership minyan to prepare some sources to discuss with our community the law regarding women wearing tallitot. At first, this struck me as a relatively simple task – women are not obligated in tsitsit, but the general rule is that anyone may perform a mitzvah even if that person is not obligated to do so. However, after further study, I found that it is actually surprisingly difficult to explain why women are exempted from the mitzvah of tsitsit. The sources I gathered on the subject, along with video of a class I later presented on the issue to my colleagues in Morashah, the rabbinic fellowship of the Union For Traditional Judaism, can be found here.

During the period of the Mishnah, the consensus was that women were obligated in tsitsit. Rabbi Shimon, however, held that because kesut laylah (“night clothing,” probably meaning clothing designated for wearing at night) is exempt from tsitsit, tsitsit is part of the class of time-dependent mitzvot from which women are exempt. By the time of the early post-Talmudic rabbis (Rishonim), and possibly as early as the late Talmudic (Amoraic) period, the pendulum had clearly swung, and women were considered exempt from wearing tsitsit. How did this shift happen? It is not clear.

I found that it is actually surprisingly difficult to explain why women are exempted from the mitzvah of tsitsit.

My speculation is that the change may have resulted from a misunderstanding of the position of Rabbi Shimon’s contemporaries. In at least one discussion, the anonymous voice of the Babylonian Talmud presumes that Rabbi Shimon’s contemporaries believed that kesut laylah is obligated in tsitsit, and therefore women were obligated in tsitsit. It seems that since many other pieces of Talmud indicate that kesut laylah is in fact exempt from tsitsit, the post-Talmudic rabbis concluded that Rabbi Shimon’s position must have been adopted.

A discussion in the Jerusalem Talmud calls this analysis into question. There, we are told that Rabbi Shimon asked his contemporaries why they did not agree that women were exempt from tsitsit since kesut layhlah is exempt from tsitsit. Rabbi Hillah explains, however, that Rabbi Shimon’s compatriots disagreed with him because an article of clothing that is designated for wearing both during the day and at night requires tsitsit.

The universal consensus that women are exempt from tsitsit is probably irreversible. However, perhaps my observations can play a role in a woman’s decision as to whether to exercise her right to wear tsitsit.[1] Rambam and the Shulhan Arukh (both the Sephardi voice of Rabbi Karo and the Ashenazi voice of Rabbi Isserless) agree that women are exempt from the obligation to wear tsitsit but are permitted to do so. However, Rabbi Issserless adopts the position that for women to wear tsitsit “appears haughty” and therefore says that women should not do so.

The realization that women were once considered obligated in tsitsit and that the history of the reversal of this rule is suspect may inform a woman’s choice to take up wearing tsitsit. But at the same time, it seems to me that a choice to wear tsitsit grounded in this historical understanding would obviate any purported haughtiness.

The universal consensus that women are exempt from tsitsit is probably irreversible.

This latter point is not meant to suggest that absent my observations the choice of a woman to wear tsitsit would be haughty. In the first place, we cannot know whether Rabbi Isserless would come to the same sociological conclusion in our time and place, nor should we presume that he expected his observation to be taken as immutable law.

Moreover, given Rav’s aphorism that a person should always do mitzvot even if the person is doing so for personal reasons, as well as the evidence that a person receives reward for fulfilling optional mitzvot, criticizing women for choosing to fulfill this or any mitzvah is, to my mind, problematic.

A final halakhic point based on my research regards the controversy over whether a person may say a blessing over a mitzvah when that person is not personally obligated in that mitzvah. I have always been on the fence about this debate, since I tend to side with Sephardic analysis of halakhah (general Sefardi practice is for women not to make a blessing on optional mizvot), while I think the Ashkenazi position on this issue is quite reasonable.[2] I would think that my observations regarding the history of women’s exemption from tsitsit might tip the balance toward women making a blessing on tsitsit even for those who generally follow Sefardi practice.

I’ve always been puzzled by how few halakhic feminist women wear tallit and/or tsitsit, though I understand the social risks involved. Hopefully my thoughts can provide an additional framework for individual women and for the feminist Orthodox community in considering whether and how to participate in the mitzvah of tsitsit.

Rabbi Noah Gradofsky is a Vice President of the Union for Traditional Judaism and serves on the Board of Lechu Neranena, the Partnership Minyan of Bala Cynwyd, PA. The opinions expressed here are his own.

[1] Because I feel that women “should have been” obligated to wear tsitsit, I would strongly encourage women not to wear a garment that is obligated in tsitsit without tsitsit attached.

[2] For some discussion on this point, see my paper “The Command of God: The Meaning and Application of Blessings that State ‘Who Has Sanctified Us By Your Commandment and Commanded Us To . . .’” available at http://www.e-ark.net/rabbi/birkatm.pdf, particularly starting on page 17, section titled “Blessings By the Uncommanded.”