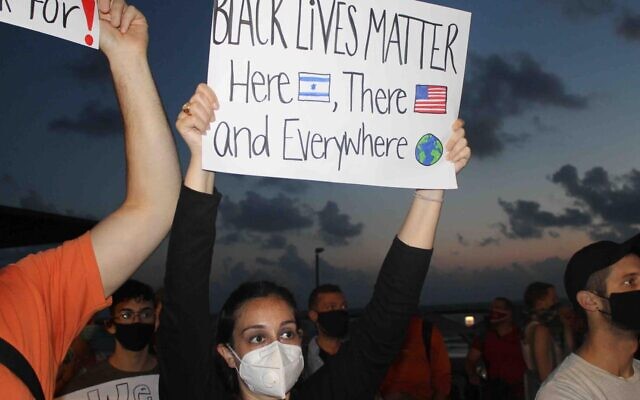 Israeli protesters rally in support of the protests sparked by the killing in police custody of George Floyd, June 2, 2020. (Sam Sokol/JTA)

I understand why so many Jews distrust Black Lives Matter. The anti-Israel plank in the 2016 platform of one of its leading constituent groups, the Movement for Black Lives, was slanderous, and we have said so in the pages of The Jewish Week. The isolated incidents of marchers who denounce Israel are a stain on the protests.

Readers tell us the movement can’t be trusted, that it is a Trojan horse for anti-Israel sentiment. These same readers bristle at what they consider the “lawlessness” of the protests and, like most white Jewish New Yorkers, they have far more trusting experiences with the police than do Blacks and Hispanics. They worry that cuts to the NYPD budget will return New York to its bad old days. For many Jews, with recent memories of synagogue shootings and street attacks, the police represent the solution. For too many people of color, they are the problem.

I suspect that this isn’t just a matter of conservatives vs. liberals. While the Jewish majority supports calls for reforming the police departments and for a racial reckoning, more quietly most prefer to work within a system that respects police and demands racial justice. Reconciling those two ideas will be the challenge of our era, and of our religious community.

To get there, it’s important to remember what BLM is and isn’t.

Black Lives Matter is less an organization than a rallying cry for racial justice. It’s akin to “Free Soviet Jewry,” a term that in its heyday was embraced by both the Jewish mainstream and the radicals. Whether you supported the organizations that wrote press releases and held mass rallies, or cheered the ones who planted pipe bombs at the offices of Russian-controlled companies, the cause of Soviet Jewry remained urgent and just.

The street protests for racial justice in all 50 states are not about Israel and the Jews. They are addressing real frustrations with policing, incarceration and economic disparities between black and white. And while there has been violence by protesters and hangers-on, there also have been dozens and dozens of instances of police beating and teargassing otherwise peaceful protesters. “Defund the Police” is an unfortunate slogan, but the protests have led to an unprecedented discussion about how our police departments operate and what can be done to make our society more just.

Consider: Since the protests began, (white) public opinion has shifted. More and more people want something done about bias within the criminal justice system. Southern states have at last begun to remove flags and statues that glorify those who fought to retain human bondage. School boards are cutting ties with police departments and looking for new, less fraught ways to keep schools safe. Cities — including NYC — are reallocating money not away from crime fighting, but towards services that even police admit shouldn’t be their job: youth employment, mental health initiatives, homeless advocacy, drug treatment. Departments are banning chokeholds and maverick plain-clothes units. Louisville is getting rid of “no-knock” search warrants for petty crimes.

There’s no contradiction between welcoming reforms like these and defending Jewish interests. Can our community do both?

One person who insists we can is Rabbi Saul Berman, a professor of Jewish studies at Yeshiva University. In a recent online lecture for Y.U.’s “Crisis and Hope” series, the respected Modern Orthodox leader talks about marching in Selma for civil rights in 1965. He quotes his mentor, Rabbi Joseph B. Soloveitchik, on the Jews’ responsibility, as citizens, to seek justice for all, not just for themselves. He quotes Torah on the obligation to rebuke one’s neighbor in the name of what’s right and just.

And he addresses this fraught moment. He inveighs against a society that tolerates inequity.

“We as citizens have the responsibility to stand up as Jews from within the framework of our own understanding [and say] what justice constitutes in the society in which we are living,” says Rabbi Berman.

As for objections about BLM, Rabbi Berman recalls marching with Catholic leaders when the church still promoted anti-Semitic views. Conversely, he remembers how Martin Luther King raised his voice for Soviet Jews.

To those who find street protests inherently unsettling, he describes how he marched for Soviet Jewry and for Israel, and against the Vietnam War and anti-Semitism.

“This is distinctively a moment of hope in American society, precisely because of the demonstrations that are now going on in cities and towns across this country,” says Rabbi Berman. “And we the Jewish community need to be fully engaged…. There are moments when the individual cannot allow their material interest to supersede their ethical responsibilities. And when that happens, we, every one of us, need to recognize our responsibility to participate in demonstrations [and] to rise against those forms of corruption.”