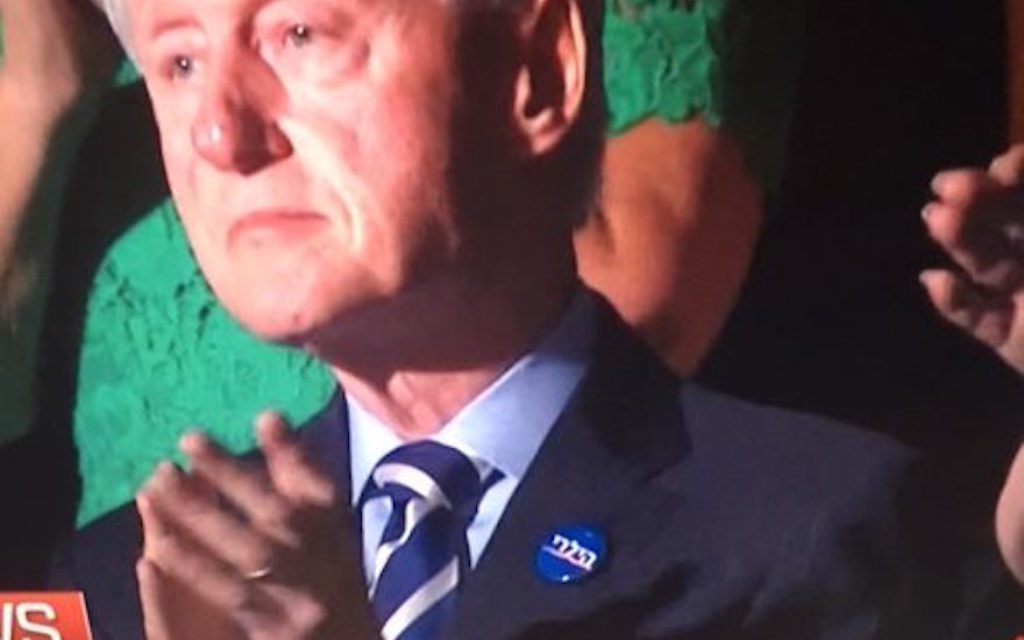 Philadelphia — There was a thrill ride on Jewish Democratic social media Wednesday night when Bill Clinton was spotted at the Democratic National Convention sporting a button backing his wife – in Hebrew.

Robert Wexler, a former Democratic congressman, indulged in a little partisan kvelling when he appeared Thursday with Israeli Ambassador Ron Dermer on a panel.

“What a remarkable statement for America that a former president of the United States could wear that,” said Wexler, who now directs the Center for Middle East Peace.

Wexler’s enthusiasm was telling: As a prominent Florida lawmaker, he was the first major Jewish political figure in 2007 to endorse then-Sen. Barack Obama’s presidential campaign. Most of the rest of the unofficial Jewish caucus in Congress went with Hillary Clinton.

Yet here he is nine years later sounding almost wistful about the Clintons.

Democrats will vigorously defend Obama’s record on Israel, and they are able to cite a formidable array of facts: the launch of the Iron Dome missile defense system – U.S. funding originated not in Congress, but in the administration – and unprecedented levels of military and intelligence cooperation. Stuxnet, the virus that disabled Iran’s uranium enrichment capacity, is widely believed to be a U.S.-Israel operation, and happened on Obama’s watch.

Yet, there is the “kishkes” thing, which drives Obama and his partisans nuts. The subtle – maybe not so subtle – messaging from the organizational Jewish side: Bill Clinton got Israel! Hillary Clinton gets Israel! What’s with Obama? The frustrated reply: Of course he gets Israel, he’s been to Sderot, and made the threat its residents face from the Gaza Strip personal when he said he could imagine his daughters facing it. He visited the grave of Zionist founder Theodor Herzl. He gets it!

And yet. Clinton was the first Democrat to mention Israel on the main stage on Tuesday night, and it came up not in the emphatic “best U.S. ally” way it did repeatedly at the Republican convention in Cleveland last week, but utterly organically, recounting Hillary Clinton’s role as Arkansas’ First Lady.

“Hillary told me about a preschool program developed in Israel called HIPPY, Home Instruction Program for Preschool Youngsters,” recalled the former president. “The idea was to teach low-income parents, even those that couldn’t read, to be their children’s first teachers.

“She said she thought it would work in Arkansas. I said that’s great, what are we going to do about it? She said, oh, I already did it. I called the woman who started the program in Israel, she’ll be here in about 10 days and help us get started.

“Next thing you know I’m being dragged around to all these little preschool graduations.”

Clinton reference to the Israeli program was so casual that might as well have been referring to a preschool program founded in Illinois. It’s the unforced familiarity that melts pro-Israel activists, and there it was on display Wednesday evening in the pin he wore.

(The button was also a nice contrast to an event from the day before, when activists outside the arena burned an Israeli flag. Some pro-Israel activists spent Wednesday demanding that the DNC send out an official condemnation of the burning, although Hillary Clinton had already denounced the act, through a spokesperson.)

Obama also had a Jewish moment in his speech Wednesday night, but it was telling in that its reference was purely American. It came toward the end, when he spoke of his Kansan grandparents and how they welcomed the stranger:

“They knew these values were exactly what drew immigrants here, and they believed that the children of those immigrants were just as American as their own, whether they wore a cowboy hat or a yarmulke; a baseball cap or a hijab,” he said.

The reference no doubt resonated with many Jews. But the relief and joy triggered by the button on Bill Clinton’s chest suggests many are still looking for something more.