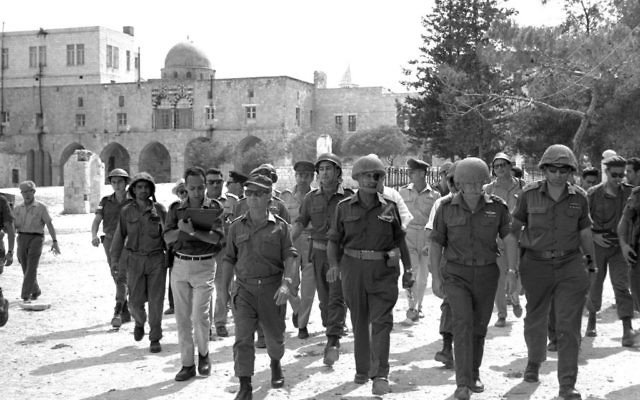 Heroes of ’67: From left in foreground, Uzi Narkiss, Moshe Dayan and Yitzchak Rabin walk through Jerusalem, which was reunited during the Six-Day War in June for the first time since the Temple was destroyed. Wikimedia Commons

Fifty years ago, the events of May and June 1967 produced an emotional reaction from American Jewry that spurred a groundswell of financial and political support for the state of Israel. But what many observers missed about the reaction was the way the war made Jews around the world feel proud, whether they were Zionist or indifferent to Israel, religious or completely secular.

Five decades after the euphoria of 1967, Israelis are divided about some of the byproducts of victory, such as the value of West Bank settlements and the rise of the more nationalist and religious forces that dominate their government. But the vast majority is still happy about Jerusalem’s unification and Jews being able to reconnect with their holy places. Moreover, there also seems to be a solid centrist consensus that believes the obstacle to peace remains Palestinian intransigence rather than Israeli policies.

But for an American Jewry that remains as solidly liberal in its outlook as it was in 1967, the cheers for the Six-Day War victory haven’t just faded. An air of indifference or even outright opposition to Israel’s cause has replaced them for growing numbers of Jews. Rather than evidence of the Israeli courage that seemed so inspiring a half-century ago, the legacy of 1967 is now seen by many as proof that the Jewish state is undeserving of the backing of enlightened liberals.

Rather than seek to understand Israeli public opinion, many liberal Jews simply tell me that the current situation makes them “feel bad.”

While uncomplicated joy over a military victory may seem naïve today, the self-conscious moralizing that has replaced it among American Jewish elites is just as, if not more, absurd. The disconnect between the reality of Israel’s difficult security choices and the angst of American Jewry about its connection to a country falsely accused of being an oppressor tells us a lot more about the shallow virtue signaling of the latter than it does about the shortcomings of the former.

The dichotomy between Israeli and American Jewish attitudes is summarized by a remark I’ve often heard when speaking about these issues. When confronted with evidence that points to a consensus about the peace process that stretches from the center-left to the center-right in the Jewish state, liberal critics of Israel tend to change the subject. They have little interest in thinking about the events of the last quarter century of peace negotiations in which Palestinian rejectionism and terrorism has destroyed support for the peace process inside Israel. But rather than seek to understand Israeli public opinion, many liberal Jews simply tell me that the current situation makes them “feel bad.”

The seemingly improbable victory of 1967 had, like the emergence of independent Israel in 1948, changed the image of Jews. Instead of the cowering victim of the Holocaust or the countless pogroms and persecutions that had preceded it in the previous two millennia, Israeli Jews were winners.

Indeed, what many of those thinking about the issue generally miss is that attitudes toward Israel aren’t rooted so much in analysis of a complex situation with few, if any, good options, but in the way American Jews act as if it was all about them.

Though 50 years ago most American Jews’ knowledge of Israel was mostly a mix of Zionist slogans and Leon Uris novels, the notion of a Jewish state winning battles against long odds made the vast majority of them feel better about their own identity and place in the world. In an era where organized Jewish life was increasingly centered on pride and concern for Israel and efforts to memorialize the Holocaust, June 1967 was a moment in which all those concerns came together to reinforce the notion that Israel represented everything Jews aspired to and admired.

The seemingly improbable victory of 1967 had, like the emergence of independent Israel in 1948, changed the image of Jews. Instead of the cowering victim of the Holocaust or the countless pogroms and persecutions that had preceded it in the previous two millennia, Israeli Jews were winners.

Like the character played by actor Paul Newman in the film version of “Exodus,” Israeli Jews were heroes and heartthrobs, not nebbishes or the villainous stereotypes into which much of Western literature had pigeonholed Jews. While not everyone could be an Ari Ben Canaan, his fictional celebrity was a reflection of the way a new Jew had emerged in Israel to sweep away the baggage of countless generations of persecution and Americans basked in the reflected glory.

Events like the 1976 Entebbe rescue could still stir the Jewish imagination, but the following decades revealed the other side of the equation by which Jews lived vicariously through Israeli achievements. As the country’s ruling Labor Party was replaced by the more nationalist Likud led by Menachem Begin in 1977 and the Jewish state received its first massive bout of negative press coverage during the 1982 Lebanon War, Israel was no longer the all-purpose morale booster for American Jews. During the first intifada in 1987, a simplistic and misleading narrative about the conflict developed in which Jews were seen as the Goliaths oppressing the stone-throwing Palestinian Arab Davids; again, Israel became a drag on Jewish identity. Rather than make everyone feel good about being linked to the plucky Jewish underdogs, much of the overwhelmingly liberal American Jewish community began to view it as a complicated and often deeply unattractive “occupier” nation that deserved criticism if not censure rather than uncomplicated adulation.

Just as the Israel of the Uris novels was misleading and told us more about the needs of diaspora Jewry than the reality of the early years of the Jewish state, so, too, is the opposite stereotype of its leftist critics that falsely claim it to be an apartheid state led by hardline leaders and religious fanatics who oppose peace and “steal” the land of Palestinians. The real question is not so much why Jews can’t recapture the uncritical spirit of 1967 or to assert that Israel’s cause is no less just today than it was 50 years ago. Rather it is why American Jewish perceptions of the conflict in 2017 are so out of touch with Israeli attitudes.

Part of the problem is the way intersectionality — the linking of all causes of minority groups — leads many on the left to buy into lies about Israel being an “apartheid” state. If you see the Jewish state as primarily a moral paradigm that must be all good or all bad, the hard choices Israelis must deal with are set aside in favor of a desire to stand in judgment upon a country that has supposedly lost its soul. That’s why many Jews choose to distance themselves from Zionism rather than to stand with embattled Israel.

Israeli soldiers at the Western Wall at the end of the Six-Day War, in what has become an iconic photograph. Getty Images

Despite the debate about settlements, the obstacle to peace today is the same Arab refusal to recognize the legitimacy of a Jewish state — no matter where its borders might be drawn — that led to the Six-Day War. But what also hasn’t changed is that American Jews still regard Israel’s tough choices as a reflection upon themselves as much as anything else. For them Israel remains an ideological theme park. If Israelis have no appetite to trade land for terror rather than peace, that is seen as a moral failing to be shunned rather than understood.

While Benjamin Netanyahu and the Jewish right may be reasonably critiqued, all too many liberal American Jews still seem primarily focused on how events in the Middle East reflect upon their own place in the world. If they are disappointed that Israelis prefer to protect their security rather than adopt policies that bolster their self-image, they shouldn’t be surprised to discover how out of touch they are with opinion in the Jewish state.

Jonathan S. Tobin is opinion editor of JNS.org and a Contributing Writer for National Review. Follow him on Twitter at: @jonathans_tobin.