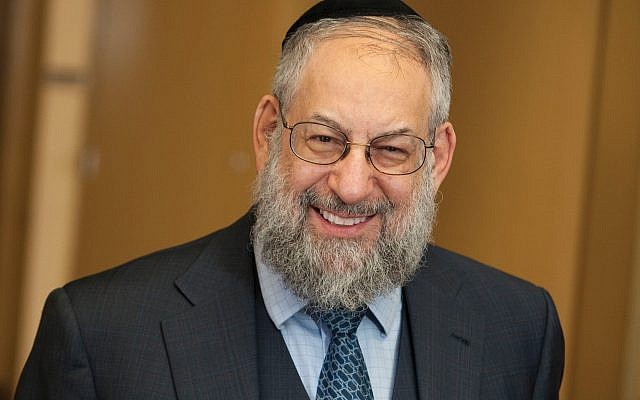 In 1974, I came to New York University’s Washington Square campus as a young instructor of Hebrew. With my kipa and beard, it was obvious that I was an Orthodox Jew. Some 45 years later, I can look back and say that I have received all of the respect and friendliness that anyone could expect, never witnessing anything that can be described as anti-Semitism.

So, I was shocked to hear that I was working on a supposedly anti-Semitic campus, a charge stemming from a phony “boycott” of NYU Tel Aviv led by a single NYU department, the department of social and cultural analysis, which has nothing to do with NYU Tel Aviv, and a rogue student address delivered at a graduate school commencement. These actions violate the principles on which NYU was built and have been widely condemned on campus.

On college campuses, opposition to Israel’s policies can manifest itself in many ways, including a few that morph into anti-Semitism. However, in opposing such actions, we must not mistakenly label the entire campus because of the actions of a few. In fact, there is no major research university in the country that can compete with the richness of Judaic studies and Jewish student life at NYU. Thirty-five years ago, as part of a drive for excellence, NYU created the Skirball Department of Hebrew and Judaic Studies, and it has gone on to become arguably the most comprehensive outside of Israel. Its 18 full-time faculty members produce important research and train students on the bachelor’s, master’s and doctoral levels who benefit from relationships with Hebrew Union College and the Jewish Theological Seminary.

Our Goldstein-Goren Center for American Jewish History, Taub Center for Israel Studies and its Graduate Workshop in Israel Studies, are just some of the ways in which we provide intense, extensive resources for students, faculty, and outside scholars. Our doctoral graduates attain prominent positions in the U.S. and elsewhere.

Recently, our Global Network for Advanced Research in Jewish Studies, which I direct, introduced the Shvidler Project on the History of the Jews in the Soviet Union, which is producing a multivolume history to be published digitally and in print. The network also helped organize “An End to Anti-Semitism!” an international conference resulting in multivolume publications. More recently, we held our first Jewish Studies Colloquium at NYU Tel Aviv, designed to build a closer relationship between NYU faculty members and graduate students and their Israeli colleagues. In collaboration with the NYU Wagner School of Public Service, our department also created a program to train students for careers of service in the Jewish community; many graduates hold senior positions in Jewish organizations throughout North America.

At NYU Tel Aviv, the target of the “boycott,” which led to false claims of anti-Semitism against NYU, we have wonderful undergraduate programs in numerous fields, and a new program that allows students to apply for Innovation Scholarship funds. It is the Israel arm of NYU’s Global Research Institute, enabling faculty in all fields of study to pursue research there.

NYU’s commitment to Judaic studies also encompasses library collections (which include incunabula, manuscripts, and rare Hebraica and Judaica), the publication of important books and a chaired professorship and scholarly program in Jewish law.

NYU also has many programs for students outside the classroom on all its campuses. Under Rabbi Yehuda Sarna, a university chaplain, NYU’s Bronfman Center for Jewish Student Life, which is affiliated with Hillel, works with Jewish organizations to provide religious services for the three major movements as well as numerous social action projects that emphasize Israel advocacy and Birthright Israel. Once a year they hold Shabbat 2000, hosting 2,000 students at a Friday night dinner. The Global Ambassador Program has extended the Bronfman Center to NYU’s global sites, offering the presence of Jewish life programs worldwide. Another unique feature is the Kosher Eatery at Weinstein Hall, a regular part of NYU’s food plan. Additionally, kosher packaged foods and catering are available in all dining halls and facilities.

Simply put, NYU has invested more in Judaic studies and Jewish student life than any peer institution. Against all this, a small minority of voices strives in various ways to make themselves heard, sometimes resulting in brazen acts designed to highlight their positions. In reality, most of NYU is unaffected by their actions and do not sympathize with them.

But by attacking NYU as anti-Semitic, we fall right into their trap. Anti-Israel activists know that their tactics will likely lead members of the Jewish community and supporters of Israel to criticize administrators for not taking strong and decisive enough stands against them, knowing full well that these administrators are constrained legally from divulging their interventions with students. Moreover, while we may disagree with anti-Israel activists, we must understand that universities are built on the interchange of ideas and on the principle of academic freedom. As a result, administrators do not have as much freedom as supposed when dealing with sensitive matters.

It is essential that we preserve the relationship between the Jewish community and the university system, which have been closely allied for years. Universities made possible the integration of Jews into all levels of the professions and business, and are home to many Judaic studies and Jewish student life programs. This is a connection that needs to be protected, not sacrificed because of the actions of a small number of people.

It is time for the pro-Israel community to understand that it has more friends on NYU’s campus than opponents. The Jewish community should be helping university administrators through these difficult circumstances, not attacking them, even if they don’t always agree with their decisions.

Lawrence H. Schiffman is Judge Abraham Lieberman Professor of Hebrew and Judaic Studies and director of the Global Network for Advanced Research in Jewish Studies at New York University.