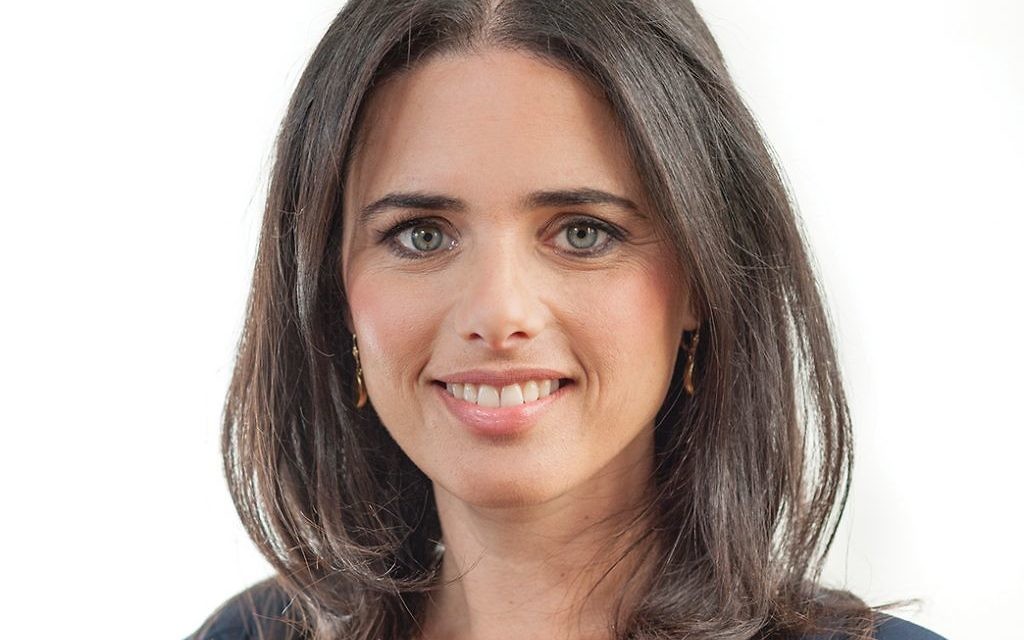 She’s been described as radical, scary, dangerous — and beautiful.

But Ayelet Shaked, the right-wing firebrand who became Israel’s justice minister in May, isn’t fazed by the characterization.

Sitting on a couch in her spacious upper-floor suite at the Omni Berkshire Place in Midtown last week, Shaked told The Jewish Week, “You just have to ignore it and keep going.” The 39-year-old mother of two, who wore a simple black blazer, black slacks and no jewelry, spoke with a heavy Israeli accent, often grasping for phrases and reverting to Hebrew. “I work hard, and I am appreciated for what I do, not how I look.”

Perhaps not everyone is so appreciative of that work, especially those on the left (like Tzipi Livni and some reporters) who fear that Shaked is looking to clip the wings of Israel’s Supreme Court and media.

Shaked, who has served as a Knesset member for the pro-settler Jewish Home party since 2013, has mainly received attention for her vocal opposition to a Palestinian state. Yet in her time as justice minister she has penned legislation to aid those in debt, pushed for mandatory military service for the ultra Orthodox and advocated for a reduction in Israel’s greenhouse gas emissions.

But with fresh violence wreaking havoc in Jerusalem and the West Bank, Shaked was focused last week on security, especially given Palestinian Authority President Mahmoud Abbas’ threat to end all security coordination with Israel in his United Nations speech. She stood firm that a Palestinian state would mean more terror for Israeli civilians.

“We saw what happened in Gaza, and in Iraq: When the West withdraws, terror organizations take over,” she said. “We’re not going to do another experiment with Judea and Samaria.”

Shaked’s strong convictions took root during her time in the IDF, where she served as an instructor in the elite Golani Brigade. Stationed in Hebron, in the heart of the West Bank, she “got to know” the religious Zionist settlers on a personal level. Growing up in the secular bastion of north Tel Aviv, it was her first exposure to the ideologically driven group.

“The army is a melting pot, and I met many of the incredible people who inspired me later to enter politics,” she said. “They are the main reason I’m in [the] Jewish Home [party].”

One of her army jobs was to give new soldiers a tour of the Jewish holy sites in the area, including the Cave of the Patriarchs. The experience cemented her views about the Jews’ “rights to Eretz Yisrael.”

Her main inspiration, however, wasn’t a Jewish officer but rather a Druze commander who was later killed by Hezbollah terrorists during the 2006 Lebanon War.

“He was the one who taught me how important it is that Israeli soldiers see our history, and understand where we are,” she said.

Despite the complicated security conflict in the West Bank, Shaked recalled how the local Arab leadership in Hebron wanted to work with the Israelis. The positive interactions gave her hope that the conflict can improve.

“We can’t be naïve about security concerns,” she said, insisting that the term “occupied territories” is fallacious — “the land is ours” — but there is “more room for peace than many think.”

Though she may be the left’s worst nightmare, she’s become close with the charedi community — quite an anomaly for a woman, and a secular woman at that.

“I bridge the gap,” she said, adding that she has met several top charedi rabbis, though she declined to specify which ones. “At this point, [the relationship] is based more on trust and less on gender.” The relationship, she said, has not been damaged by her leading role in drafting a bill mandating military service for charedi men.

Though Shaked had remained composed throughout the interview, a look of weariness flitted momentarily across her delicate features.