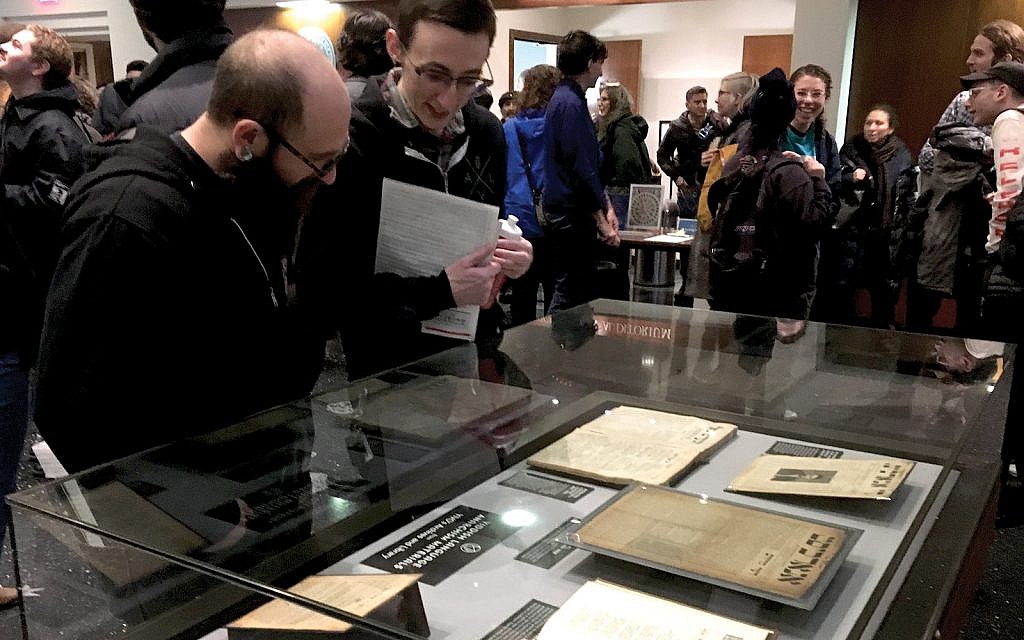 Some 450 people attended a Jan. 20 conference at the YIVO Institute for Jewish Research in New York on the history of Yiddish anarchism. JTA Photo

New York (JTA) — To the degree that you know anything about Yiddish anarchism, it probably boils down to one name: Emma Goldman. And even then you are probably more familiar with Goldman as an immigrant firebrand and ur-“nasty woman” than with the truly radical content of her political philosophy.

And by “you” of course I mean me, the kind of person who showed up as a blank slate Sunday at an all-day symposium on Yiddish anarchism held at the YIVO Institute for Jewish Research here. What organizers figured might be a sparsely attended gathering of Yiddishists and nostalgic radicals turned into a standing-room-only occasion for recalling and rehabilitating an overlooked political legacy on the Jewish left.

“I told YIVO that maybe 70 people would show up and sit down for an anarchist conference,” conference co-organizer Spencer Sunshine said. Over 450 people attended.

Sunshine assured attendees like me that we weren’t alone in our ignorance of the topic. Sunshine, who wrote his doctoral dissertation on post-1960 anarchism in the U.S., said the Jewish immigrant radicals were largely ignored by scholars and institutions who wished that “the anarchists never existed.”

Nevertheless, the conference attracted almost a minyan of scholars who have been exploring the topic, often using the material that had been gathering dust in YIVO’s archives.

Their subjects include once well-known figures like poet David Edelstadt and lexicographer Alexander Harkavy, and popular publications like Vahrheit (Truth), Freie Arbeiter Stimme (Free Voice of Labor) and Der Arbeiterfreund.

A 1892 advertisement in the Yiddish anarchist magazine “Tfilo zako” promotes an anti-Yom Kippur event on New York’s Lower East Side organized by the “New York Proletarian Group” at which attendees will “fulfill their duty to have fun and go wild on the day of the fast.” YIVO/JTA

Kenyon Zimmer of the University of Texas at Arlington, Sunshine’s co-organizer, noted that Freie Arbeiter Stimme by 1914 had a circulation of 30,000, or one-third that of the popular Forverts, which had a more mainstream democratic socialist bent. Zimmer also pointed out that Morris Sigman, president of the International Ladies’ Garment Workers’ Union from 1923 to 1928, identified as an anarchist (as did Leon Moiseff, the chief engineer on the Manhattan Bridge).

So what did these Yiddish anarchists actually believe? While anarchism has often been associated with violence and disorder, its followers appear to be a lot more, well, mainstream in their radicalism. Yes, they opposed the idea of the state and borders, and posited a society that organized itself without authority. They rejected communist and socialist movements that, like capitalism, depended on a centralized state. But a philosophy that sounds unrealistic and utopian was also matched by a practical bent: Anarchists focused on smaller cooperative movements, like labor unions, housing cooperatives, alternatives schools and the like. Moiseff’s bridge still stands.

As for the Jewish anarchists, Zimmer said they shared a commitment to secular Yiddish culture, militant atheism and fighting anti-Semitism. They rejected the idea of a Jewish homeland — or any nationalism, for that matter. They also resisted the idea that Yiddishkeit is defined merely by biology or descent — a principled pluralism that made it possible for a German, Yiddish-speaking gentile like Rudolf Rocker to become one of the leading Yiddish anarchist editors and organizers of his day.

Anna Elena Torres, an assistant professor of comparative literature at the University of Chicago, spoke about the cultural contributions of the Yiddish anarchists, who left behind some 20 newspapers and a tradition of “svetshop” poetry that celebrated “bodily autonomy, a world without borders, a radical future and a world above and beyond the state.” Emma Goldman edited Mother Earth (1906-1917), an anarchist journal that published poems, stories and essays focused on women’s rights, birth control and civil liberties.

Like much of secular Yiddish culture, Yiddish anarchism began to fade after the 1920s, an inevitable victim of immigration quotas and assimilation in the United States, and later the destruction of European Yiddishland by the Nazis. Freie Arbeiter Stimme hung on until 1977, and aging anarchists mentored young radicals through the 1970s and ’80s. The symposium’s keynote speech was delivered by Anatole Dolgoff, whose parents, Sam and Esther, spent most of their lives in the radical movement.

Sunshine noted how unpopular views got the Yiddish anarchists read out of Jewish immigrant history — none more unpopular than their rejection of Zionism. But that, he suggested, is also what makes them attractive to a younger generation of Jews on the far left, who he guessed (and audience reaction confirmed) made up a good chunk of those in attendance on Sunday.

“Radical Jews who reject Zionism are probably interested in Yiddish anarchism because they are looking for a variety of historical alternatives which they can ransack for materials in their quest to build a new, radical, positive Jewish identity,” Sunshine said in his introduction.

Such alternatives are scarce in a far left increasingly focused on anti-Zionism, he suggested.

“I would guess that some of this [curiosity] is fueled by an exhaustion with the role of the anti-Zionist Jew, which unfortunately is the only Jewish identity that’s on offer in the radical left of today,” Sunshine said. “And while there is nothing wrong with this, it is a purely negative thing that has nothing positive to say about Jewish identity or tradition, and people — even who are firm anti-Zionists — I think want to have a more affirmative role about Jewish identity.”

After the conference, I spent an evening reading up on anarchism while cable news murmured in the background. The federal government was still shut down and the executive and legislative branches couldn’t agree on a way out. The administration’s practice of separating families who crossed into the U.S. without papers appears to have been far larger and more chaotic than previously reported. A report said hundreds of rural hospitals have closed or are at risk of closing because states chose not to expand Medicaid eligibility to more of their low-income residents.

That kind of news suggests why a philosophy like Goldman’s will always remain seductive, and relevant. Anarchism, she wrote, “is not a wild fancy or an aberration of the mind.” Rather it stands for “individual liberty and economic equality, the twin forces for the birth of what is fine and true in man.”