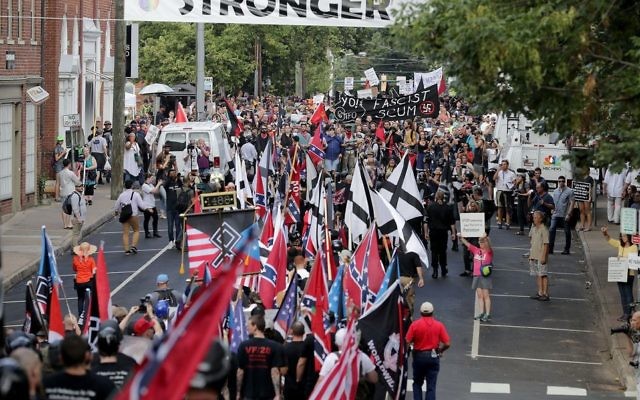 With unfocused rage a global pandemic, it’s hardly surprising that anti-Semitism is surging around the world. France is becoming increasingly uncomfortable for many Jews, and England’s politics seem infected with the virus. In this country, a resurgent white supremacist underground, the subject of a new report by the Anti-Defamation League, is making alarming inroads.

Also at home, a handful of progressives, opposing the strong and bipartisan support for Israel in Congress, are reviving anti-Semitic tropes about sinister Jewish manipulation of national affairs.

In this frightening new environment, it is important to keep things in perspective.

Anti-Semitism is unique in its endurance over the centuries and in the terrible extremes to which it has been carried. Jew-hatred must be confronted directly and aggressively, but it also cannot be divorced from the fight against all expressions of racism and xenophobia.

This week’s ADL report points to how resurgent anti-Semitism is part of a much broader scourge.

Propaganda efforts by white supremacist hate groups dramatically increased in neighborhoods and campuses in 2018, and the number of racist rallies and demonstrations is on the rise, with at least 91 such public events last year alone.

Typically, these white supremacists and “alt-right” groups don’t limit their venom to African-Americans, but target a range of minorities, including “Muslims, immigrants and the LGBTQ community,” according to the ADL.

There is little doubt these groups have been emboldened by the current political climate, and that our political leaders — from the president on down — need to do much more to signal that rank intolerance cannot be tolerated in a democratic nation.

Jewish leaders, led by groups such as the ADL, need to redouble their efforts to combat the hateful propaganda of the white supremacist and neo-Nazi groups. Educating the public about the specific dangers of anti-Semitism and supporting strengthened hate crime laws protecting Jews must be part of the effort, but so too must be a broader effort to combat groups that target all vulnerable minorities, not just Jews. That means a renewed emphasis on coalition-based community relations work.

This week House Democratic leaders were preparing a resolution condemning anti-Semitism in the wake of controversial remarks by Rep. Ilhan Omar (D-Minn.), but they need to do more to make clear to a nervous Jewish community that such anti-Semitic tropes have no place in their party. Criticism of Israeli policy is legitimate, but wrapping that criticism in conspiracy theories about Jewish control is not.

Anti-Semitism infiltrating the anti-Israel left is worrisome, but the more immediate threat is posed by a reenergized and violent white-supremacist underground steeped in racism, xenophobia and anti-Semitism.