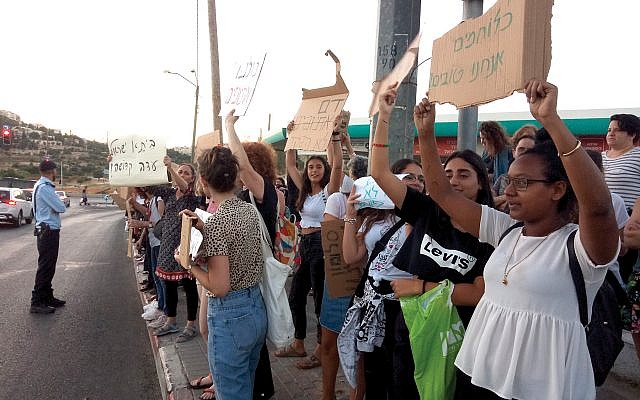 Jerusalem — Last week Naava Shafner, a Jerusalem-based social activist and feminist, joined a demonstration on a busy Jerusalem street corner to show support for Ethiopian Israelis protesting the killing of 19-year-old Solomon Tekah by an off-duty policeman who is claiming self-defense.

Community leaders said the killing, which is under investigation, is just one of countless racist incidents that have been directed toward Ethiopians.

“I’m here because part of our white privilege is the ability to stand up for those who don’t have privilege. At the end of the day it is our responsibility,” Shafner said during the loud but orderly demonstration.

Although racism has always existed in Israel, Shafner said, “we have so many other things going on, we haven’t brought the issue to the forefront. But for Israel to be a light unto the nations, we have to stand up when things like this happen.”

Shafner was one of the many white Israelis jolted into action after Israel’s Ethiopian community brought much of the country to a standstill by blocking major roads, including highways. The protests, some of them violent, lasted for hours and were deeply disruptive. Stuck in the traffic jams, a groom nearly missed his own wedding, a family missed their son’s army ceremony, people missed their flights and an infant with a heart condition ran out of medication.

Although this was not the first time the 150,000-strong Ethiopian Israeli community has taken to the streets to publicize their agenda, their actions last week were a public wake-up call.

The protests made the front page of every Israeli newspaper and were the subject of numerous social media threads. A Hebrew-language video showing a dozen police officers harassing black young men sitting peacefully on a bench quickly went viral.  (A Justice Ministry investigation of the recent shooting found that the officer fired at the ground and the bullet ricocheted into Tekah.)

Some people acknowledged racism while fuming over the demonstrators’ tactics.

“Yes, the Ethiopians have a legitimate long-term gripe against how they are treated by the police and others,” Murray Gingold, a computer expert, wrote on Facebook.

But Gingold felt that the demonstrators “pissed off” the public.

“That’s not a smart thing to do — there is such a thing as negative publicity. And this applies to any group that pulls stunts like this. You want my support? Well, not if you cause me a huge inconvenience while lobbying for it.”

While “violence is never OK,” she said, “let’s think about why a community that is generally peaceful is so frustrated and feels so helpless that some of them (the minority!!) are violently protesting.

“Maybe it’s because when they’re peaceful no one gives a crap? It’s like ‘oh, how nice, the Ethiopians are protesting, and they’re totally right, pass my espresso.’ This is on us, as a society, for not paying attention unless people shout,” Schwab said.

In 2015, after police attacked an Ethiopian soldier in uniform and demonstrations turned violent, Yassan said, the Israeli public began to take note of police harassment toward Ethiopian teens and young adults.

“Without these demonstrations the government would not have created  an official government committee headed by the chair of the Ministry of Justice. The report she wrote was formal recognition of state racism toward civilians in Israel,” Yassan said.

That racism manifests in a variety of ways.

During the early years of Ethiopian aliyah the government sent most of the community’s children to boarding schools, isolating them from Israeli society and their own parents. They learned Hebrew but not Amharic, so in cases where the child arrived in Israel before the parents, they were unable to communicate with each other.

Even today, many children of Ethiopian descent aren’t integrated into predominantly white classrooms and receive an inferior education, according to several studies.

In the 1990s it was revealed that Israeli hospitals were secretly throwing out blood donations from Ethiopians due to fears of HIV-AIDS transmission. Demonstrations ensued.

Further, the Chief Rabbinate has long questioned the community’s Jewishness and some rabbis have demanded that Israelis of Ethiopian descent undergo a conversion. They question the authority of the community’s rabbis.

Michal Avera-Samuel, a community leader who heads the Fidel Association for the Education and Social Integration of Ethiopian Jews in Israel, told the Zman Yisrael media outlet that when white people see her walk around the upscale neighborhood where she lives, “women driving SUVs stop me and offer me jobs as a cleaner. If someone is looking for a cleaning lady, I’m the obvious candidate, right?”

Avera-Samuel said her nephews have been “slapped around” by police for no reason whatsoever.

“How would you react if someone slapped your child? Why is it that anything an Ethiopian kid does ends up with a police record? Why should I be afraid of any encounter my children may have with the police?”

Fentahun Assefa-Dawit, director of the Israeli NGO Tebeka, founded in 2000 by the first Ethiopian-Israelis to qualify for the bar, told The Jewish Week there has been “tremendous progress” in the integration of Ethiopian Israelis within society, but that racially driven offenses need the immediate attention of the government and relevant authorities.

“Some of our recent advances include the implementation of a code of conduct that every police officer must carry in his/her pocket,” Assefa-Dawit said. “Tebeka also led the call to introduce body cameras for close to 10,000 officers in 2019. We led the call for greater enrollment of Ethiopian-Israeli police cadets and the promotion of professional Ethiopian-Israeli officers to senior posts, and those goals are being met.”

Given these successes, “it is frustrating and tragic that too many police officers take the law into their own hands,” he said. “Israelis, regardless of their ethnicity, gender or religion should be joining hands to work for a more equal and just Israeli society.”

At the Jerusalem demonstration, a handful of Ethiopian  protesters were joined by about 100 white protesters, who kneeled alongside them creating placards out of torn-up cardboard boxes.

Together they chanted “Bibi, Bibi, Wake Up,” and “Ethiopian Blood Isn’t Cheap.”

Israel Sykes said he came to show his solidarity “because Israel must deal with racism.” While road disruptions are painful, “no one pays attention if they don’t do it. This was an authentic outburst of pent up frustration.”

Betty, an Ethiopian Israeli activist at the protest, said she fears for her son’s safety.

“He served in the IDF, he served his country. But now, I’m even more afraid for him,” she said.

“I’m not saying every Israeli is a racist. I know many good people. It’s the minority of racists that are harming us.”