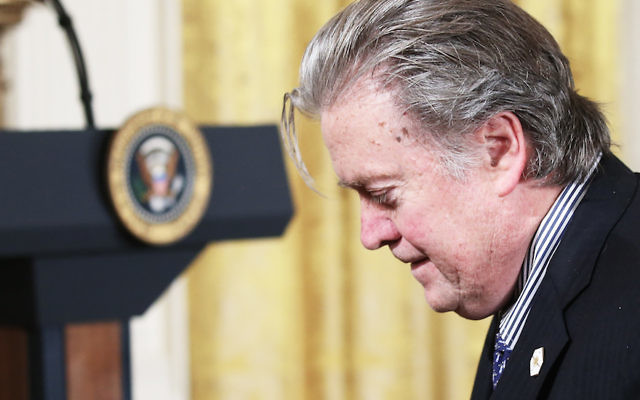 Steve Bannon at a news conference in the East Room at the White House, Feb. 16, 2017. (Mario Tama/Getty Images)

“White House Chief of Staff John Kelly and Steve Bannon have mutually agreed today would be Steve’s last day,” Sanders said. “We are grateful for his service and wish him the best.”

The statement came shortly after The New York Times reported that President Donald Trump had decided to remove Bannon. Two administration officials told the Times on Friday about Trump’s decision.

A source close to Bannon told the Times that the decision was his idea and that he had submitted his resignation to Trump over a week ago. The source claimed that the unrest in Charlottesville, Virginia, delayed the process.

Bannon’s position in the administration has been intensely scrutinized over the past week. At a news conference, Trump was ambivalent about Bannon’s status, saying “We’ll see” about his future in his strategist role.

On Thursday, the liberal American Prospect magazine published an interview with Bannon in which he mocked members of the administration and criticized Trump’s posturing with North Korea.

Bannon has also feuded for months with other members of the Trump administration, including senior adviser Jared Kushner and National Security Adviser H.R. McMaster.

Bannon, the former head of the right-wing site Breitbart News, has been under fire since he began working for the Trump campaign last year. He has been criticized for calling Breitbart a platform for the “alt-right,” a far-right and white nationalist movement that includes anti-Semitic figures and followers.

Bannon has denied he is anti-Semitic, and supporters point out that Breitbart  is pro-Israel. This week he welcomed the president’s divisive comments on a far-right rally in Charlottesville, saying that as long as Democrats are focused on race and identity, the Republican Party will crush them in the polls.