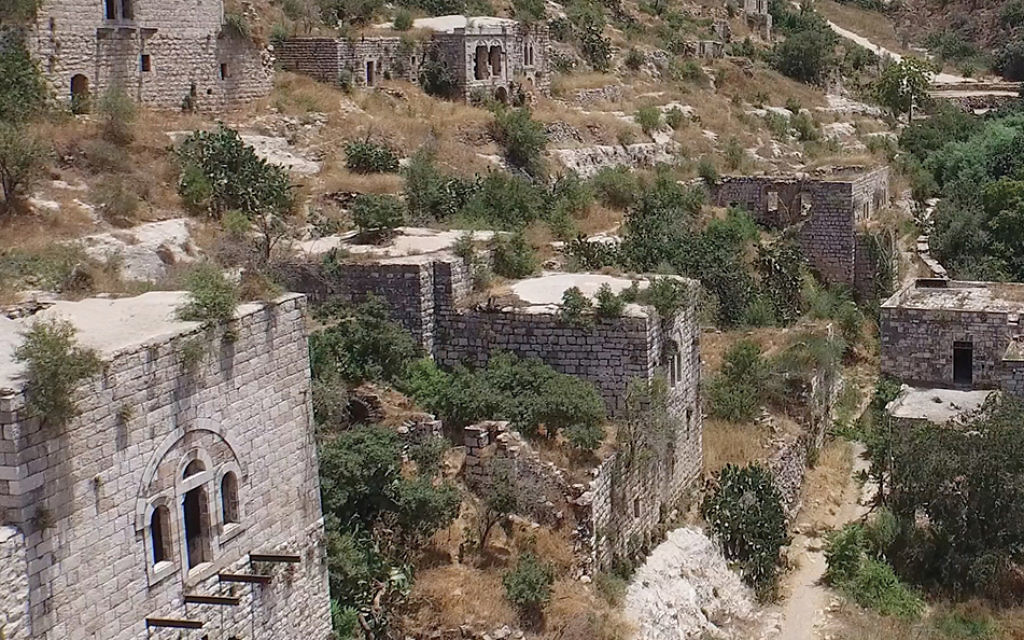 The landscape is austerely beautiful, a vertiginous collection of cliffs on which are set stone buildings that somehow manage the difficult feat of blending ornateness with great simplicity. If the setting were anywhere but overhanging a road that is the western entrance to Jerusalem, it would be a storied tourist attraction, faithfully preserved. Instead, the abandoned village of Lifta is yet another in the unending series of flashpoints that make the Israeli-Palestinian conflict so painful.

“The Ruins of Lifta,” a new documentary by long-time collaborators Oren Rudavsky and Menachem Daum, ponders this paradox at length. Lifta, as Daum says early in the film, “is the only Arab village abandoned in 1948 [during the Israeli war of independence] that hasn’t been either destroyed or repopulated by Jews.” Consequently, the village’s future has taken on great significance for Daum as he continues to pursue the task of historical reconciliation that began with the pair’s previous film, “Hiding and Seeking: Faith and Tolerance After the Holocaust” (2004).

Menachem Daum, left, with Yacoub Odeh, who is at the center of the fight over Lifta.

In that film Daum, a son of survivors who was raised to believe “that all non-Jews are out to get us,” explored the more nuanced reality of post-war Poland, spending time with young Poles who labored to restore Jewish cemeteries and cultural institutions.

Speaking from his New York City apartment where he is recovering from major surgery, Daum says, “I see [the film] as a direct follow-up to ‘Hiding and Seeking.’ That film was about getting past the losses of the Holocaust, as I began to realize that I had over-generalized about the Polish people. At screenings of the film, people would express surprise that there might be such a thing as a good Pole. And I realized that I had never actually met a Palestinian, that I had been raised to believe that they wanted nothing more than to finish what the Holocaust had started.”

A friend, peace activist Aaron Levitt, brought him to see first-hand the activities of ad hoc coalitions of Israeli Jews and Palestinians who were trying to save local olive groves, and Daum eventually became acquainted with people who were mapping Lifta, trying to draw attention to its natural beauty.

“It’s not on any tourist maps,” he explains, leaning back in his armchair. “It’s like a well-kept secret.”

That secrecy is both a blessing and a curse.

“Jerusalem has undergone a huge building boom in the last several years,” notes co-director Oren Rudavsky. “People around the world have been buying up land, and a place like Lifta is a very attractive target.”

Ironically, some of the developers who are interested in the village are hopeful that their investment will preserve rather than destroy the site, as Rudavsky says. “Many of these are people of good intent,” he adds.

For the Liftawis, the former residents of the village, there is more at stake than historic preservation for its own sake. As Yacoub Odeh, who is at the center of the fight over Lifta and, appropriately, embedded in the heart of the film, asserts, “We have roots, we didn’t fall from the moon, this is our village.”

As in their previous two films, “Hiding and Seeking” and “A Life Apart: Hasidism in America” (1997), “The Ruins of Lifta” essentially is the story of Daum’s quest for meaningful dialogue with his own past and the history that has buffeted his family and communities. To that end the filmmakers even brought about a meeting between Odeh and Menachem’s old friend Dasha, a Holocaust survivor.

“Dasha decided she wouldn’t allow herself to be destroyed by hatred,” Daum says. “She wouldn’t hate.”

Yet the encounter between the two is a bit barbed at first. Gradually, as the effects of age begin to show on Dasha, Odeh warms to her and they walk slowly, arm in arm, across the stony fields around Lifta.

To the great credit of its creators, “The Ruins of Lifta” offers no pat dialogue-based solution to the crises of the region. The film’s subtitle, a matter-of-fact statement, “Where the Holocaust and the Nakba Meet,” suggests the extremely tentative nature of that meeting. It’s not a collision, but it’s not a group hug either.

For Menachem Daum, it represents a guardedly hopeful continuation of lessons he learned from his friend Rabbi Shlomo Carlebach, who told the filmmaker, “You must see the potential goodness in every human being.”

“That,” Daum concludes, “is the basis of my film work.”

“The Ruins of Lifta” opens on Sept. 23 at the Lincoln Plaza Cinema (62nd Street and Broadway), lincolnplazacinema.com.