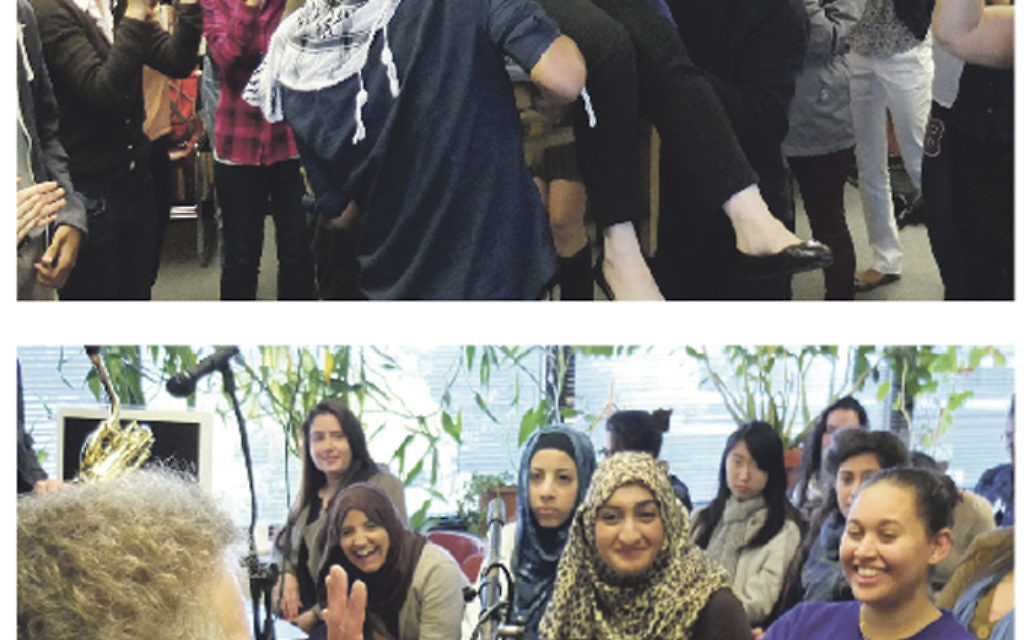 Sarah Jafferali, who was born in Trinidad, did not meet a Jew outside of the Bible until she was 13. Her family had moved to Crown Heights, Brooklyn, and she accidentally kicked a soccer ball into the yard of some chasidic Jews. She looked at them, and they at her, but not a word was exchanged as she retrieved her ball.

Last May, she graduated from City College with a major in Jewish studies; she now works as the administrative assistant in CCNY’s Jewish studies program.

“Jewish studies is interesting to me because of its absence in my life,” she says. Jafferali hadn’t expected to major in Jewish studies in college, but one class led to another and she was hooked.

“This is the only Jewish studies program I know of where 95 percent of the students are not Jewish,” says Roy Mittelman, who directs the Michael and Irene Ross Program in Jewish Studies. Many of the students are children of immigrants — a long tradition at City College, which has long been known informally as the poor man’s Harvard. In the 1920s and ’30s, when many colleges had quotas for Jews, City College was open to all, and the school was 80 percent Jewish. Today, of the 16,000 students on its campus of neo-Gothic buildings and open plazas, a third are African American, a third Hispanic, and a third white and other.

Mittelman, a man of high energy with a gentle nature, first came to CUNY in 1986 as the Hillel rabbi and an adjunct in Jewish studies. He became director 11 years ago. He and the program’s other full-time faculty member, Amy Kratka, are joined by a number of adjunct professors. About 1,000 students register for around 15 Jewish studies courses each semester. This week, Mittelman, who holds a doctorate in religion from Temple University and ordination from the Reconstructionist Rabbinical College, is traveling to Morocco with students from his advanced seminar on the Jews of Morocco.

Other colleges in the CUNY system have rich offerings in Jewish Studies — at Brooklyn College it’s a full department and at Queens there’s the Center for Jewish Studies, for example — and while their courses may appeal to a wide range of students, most of their majors are Jewish.

At City College, the Jewish studies program office doubles as a venue for this United Nations of learners to hang their coats, study, use the computer and occasionally gather for pizza. Mittelman is an accomplished photographer, and his black-and-white views of Morocco line the space.

Every few minutes, another student pokes his or her head into Mittleman’s office, and it’s his habit to wave them inside to chat. In the adjacent library in the Jewish studies lounge, he shows a visitor a leather-bound copy of the Torah in Urdu, a gift from the family of a Pakistani student, who presented it to him at graduation.

Mittelman, 57, describes the program as academically rigorous and admits that it reflects his vision. “There are a lot of gateways into Judaism; I like to think that this program allows students multiple entryways into Jewish civilization.”
“You learn more about yourself through the mirror of the other,” he adds.

At a recent session of “Intro to Jewish Life and Religion,” the professor, Rabbi Emanuel Rigoberto Vinas, was discussing the laws of kashrut. A student who works in a supermarket had a question about packaged meat and another wanted to know whether the New Testament refutes the kosher laws. After explaining why blood sausage would never be kosher, Rabbi Vinas shifted the conversation from the practical details to the history of blood-libel accusations. After class, Tauhid Mahmud, a premed bio major from Bangladesh with a minor in Jewish studies, lingered to talk more about halal, the Muslim dietary laws.

For Rabbi Vinas, who leads the Lincoln Park Jewish Center in Yonkers, teaching at City College enhances his own Jewish learning. “It changes the way you think about Jewish life,” he says.

“The students are totally engaged — they come here to learn and grow, and we’re making friends on many levels,” he adds. After taking Rabbi Vinas’ class, Peter James Morales, who grew up in the North Bronx and describes himself as Latino, discovered his own Sephardic ancestry.

Many students say their friends and family were initially surprised about their studies — “You’re taking what? — but ultimately supportive, sometimes with a follow-up question like: “You converting or something?”

Jewish students are also part of the mix, including a few who attended Orthodox yeshivas.

“The philosophy of the department is different. It is intellectually based,” says Liane Graham, who grew up on the Upper East Side, speaks Hebrew and is double majoring in Jewish studies and creative writing.

“I didn’t come here with the intention of going into Jewish studies. When I saw non-Jews in the classes, I realized it was something special. In yeshiva, I asked too many questions. I was the black sheep. This is a good place to ask questions. They take you seriously.”

Laura Hoffman, Karim Elhaies and Brigit Kelly Young are Jewish studies majors, in the same Hebrew class. Hoffman, who was raised in El Salvador, says that her classes in Jewish studies affect her life outside of the classroom, in how she thinks and sees the world. Young, a published fiction writer, was already on the road to conversion when she began the program. The daughter of “an atheist academic father and a Catholic hippie mother,” she moved to New York from Michigan at age 18 to become an actress, but found she preferred reading and writing. “The program brings my intellectual and spiritual sides together.”

Hoffman and Young say that Elhaies, who is wearing a red T-shirt he designed with a cross, crescent and Star of David, is the best in their Hebrew class. The day after Yom Kippur, Elhaies brought challah for the class to share (he works part time at Le Pain Quotidien). Born in New York and raised in Cairo, Elhaies, who is also majoring in international relations, says that he was always curious about Judaism. After graduate studies he plans to return to Cairo. With his new understanding of Jewish culture, he expects to be able to “defend it to people in the world who speak out of no knowledge.” As part of an assignment, he recently visited a Sephardic synagogue on his own, sat in the back, and soon found himself speaking French and Arabic with an Egyptian Jew.

Although not a Zionist, Elhaies says that he is very interested in the possibility of a trip to Israel with Mittelman, despite some security concerns. The trip they have been discussing would include Jewish and Arab sites, and events reflecting the two cultures.

A few years ago, Mittleman asked the Muslim students in the program about engaging in a dialogue with Jewish students. So for about three years, a group of Muslim and Jewish women in the program met for a kosher halal lunch and discussion. Mittelman explains that the lunch has now morphed into a weekly session of male and female Middle Eastern students hanging out in the lounge; the Muslim students sometimes pray there.

“We may go back to a more formal lunch, but for me the important thing is that these students could be studying and hanging out anywhere, but they feel welcome and at home in Jewish studies. There are all kinds of ways to talk about healing the Middle East conflict, and this is how we do it.”

While most students say they took their first Jewish studies course out of some curiosity, some say they signed up by default, only to have their interest piqued. Nihal Hashem, who has worn a hijab since she was 16, was convinced by her friend Elhaies to sign up for a course, and now is a Jewish studies minor. Her reasoning: “Just to be able to know more. We are very similar.”

Rabbi Adam Mintz, a fellow at the Tikvah Center in Law and Civilization at NYU Law School who has taught at City College for the past three years, has given courses on the history of Jewish life in New York and medieval Jewish commentaries.

“What Roy Mittelman has accomplished is that he has changed the discourse,” he says. “It doesn’t matter what your political views are — it’s a very safe environment. It’s about wanting to see what the culture is all about. And that’s very interesting, in this world whether everything is so politicized. “

In 2008, Michael Ross, class of 1939, made a $10 million gift to establish a Jewish studies center. Ross, who was Isidore Rovinsky when he graduated, went on to become a television comedy writer and producer, who had his first television credits with “The Garry Moore Show,” and went on to write and produce “All in the Family,” “The Jeffersons” and “Three’s Company.” He also established a chair in Yiddish and Hebrew studies.

International trips, paid for by Ross’ endowment, are free to students.

The program just published “Shiv’im Panim: Collected Essays,” Volume 1. A thick journal of 70 essays by students, the title refers to the traditional view that there are 70 ways to interpret the Torah.

In addition to the trips and publications, the programs hosts speakers and special events weekly, mostly of an academic nature, open to the entire CCNY population. Last week Lisa Mayer and Sruli Dresdner gave a presentation on klezmer music, including explanations, performance and — with chairs moved out of the way — dance instructions. Mayer led the circle — with women in hijabs, others with crosses around their necks, a Ramaz grad, a tall guy with fashionable glasses and a keffiya and a black woman from mid-Manhattan who said she was born to dance.

Standing on the sidelines, Mittelman was taking in the scene with his camera.

“I think we’ve changed the trajectory of many students’ lives, one student at a time,” he says. “This is the way I express my love of Judaism, serving as a bridge.”