One of the great unsung pleasures of being a Jewish traveler in Budapest is reveling at how conspicuously mainstream Jewish culture is here. Throughout most of Europe (and the world, for that matter), the Jewish sites, if there are any, are a special interest niche; ditto the Jewish community, if, in fact, it is alive at all.

Not so in Budapest. Jewishness, past and present, is a pervasive ingredient in Hungary’s spicy, richly textured capital. The “Great” Dohány Street Synagogue — the largest in Europe — is among the city’s chief attractions, and it’s only one of many vibrant Jewish congregations. There’s a Jewish quarter, but it isn’t the only Jewish neighborhood, or the only area with synagogues or Jewish eateries.

Speaking of eateries, Budapest is the rare European city with multiple kosher options as well as plenty of non-kosher Jewish restaurants. You could eat Jewish for days, and never run out of variety.

The same goes for Jewish culture, which lives inside galleries, concert halls and theaters year-round — as well as in informal spaces like the Friday klezmer dinner shows at the family–owned Rosenstein Restaurant, a haimishe (if decidedly unkosher) spot.

Repeat visitors will find plenty new to enjoy. The past few years have seen a significant investment in the restoration of historic Jewish spaces, from myriad synagogues to Goldmark Hall —  a hybrid archive, exhibition and performance space that re-opened with a popular exhibition on the Jewish quarter.

The new Goldmark Hall is a popular venue for Budapest’s many festivals, which aggregate the living Jewish legacy year-round via klezmer bands, cantorial concerts, dance parties and literary happenings. Highlights include the Jewish Art Days in May, as well as September’s weeklong Jewish Cultural Festival. 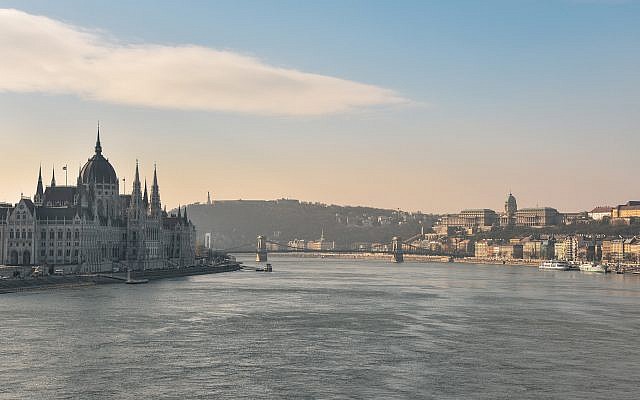 The Danube flowing through Budapest.

For American travelers, the Hungarian capital is also closer than ever. LOT Polish Airlines now flies nonstop between JFK and Budapest, a door-to-door flight under nine hours.

The bifurcated city, merged in the 19th century from the twin burgs of Buda and Pest, sprawls across a particularly scenic stretch of the Danube. Castles and villas dot the green hills of Buda to the west; the flat plains of Pest lie east of the river, with the greatest concentration of Jewish sights and activities.

There are infinite ways to experience Budapest, but arguably the finest introduction is Castle Hill. It’s literally the view of kings: Buda Castle has been the site of royals since medieval times, looking over cobblestone, courtyards and turreted staircases to the bustling Jewish quarter beyond. (Nowadays, the castle-palace complex houses the Budapest History Museum and showcases Magyar painters in the Hungarian National Gallery.)

Stroll across the Danube along the Széchenyi Chain Bridge, an 1840s marvel that rivals the Brooklyn Bridge for historical resonance, then peel north toward the Hungarian Parliament. It’s the waterfront façade you see in every picture of Budapest — the lacy white one with Gothic arches, spires and domes. The inside is equally impressive, with enough gold filigree and red velvet to make any royal feel at home (crown jewels help).

Indeed, the sheer majesty of imperial Budapest — a visual feast of boulevards, plazas and palaces — is a fitting context for the Great Synagogue. The temple’s sheer size might feel out of place in a smaller-scale city, but this is Hungary: Budapest is like the largest three or four cities of most other countries all rolled into one. 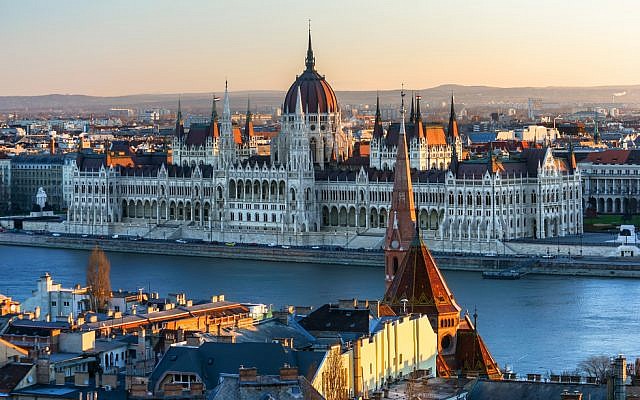 Before the war, roughly one in four Budapest residents was Jewish. Even after World War II and the Holocaust decimated European Jewry, the city remains a Continental Jewish hub, with population estimates ranging from the high five to the mid six figures.

Jewish life has deep roots in the hills of Buda, as evidenced by the remains of several medieval synagogues near the castle. Fascinating inscriptions and gravestones from that era are on display in the castle complex’s Medieval Jewish Prayer House, a restored 14th-century chapel that was dedicated last fall.

But it was the eastern bank of the Danube, in the modern seventh district, where Budapest’s most iconic Jewish neighborhood flowered. From the mid 19th-century until the Holocaust — when the same streets imprisoned their residents in a wartime ghetto — downtown Pest was the center of Jewish life. A prosperous, influential community worshipped at grand synagogues, socialized in cafés and shopped along Dob Utca, the main Jewish thoroughfare then as now.

A taste of this old world can be found at Frohlich Kosher Confectionery, an atmospheric bakery on Dob Utca with cherry red walls and vintage molding. The pastries in the glass case are similarly nostalgic: chocolate caramel torte, strudel and flódni, the signature Hungarian-Jewish cake with layers of poppy seed, plum jam, apples and walnut.

Hungary being a relatively traditional society — at least culinarily, which is no complaint — the district’s Jewish eateries make a compelling case for gastronomic tourism. These include the kosher meat restaurants Carmel and Hanna, both of which specialize in scrumptious Magyar standbys: goulash, eggs, cholent, river fish, poultry stuffed with dried fruits, dumplings and more dumplings.

Leave room for dessert. Hungarian stews are heavy, but the last (equally rich) course is culturally essential; this is, after all, the heart of European café culture, so end your meal with the ubiquitous flódni or palacsinta, an eggy crêpe. Hungarian wines — fruity whites and spicy reds, many from the hills around Lake Balaton — are a serendipitous discovery for many. 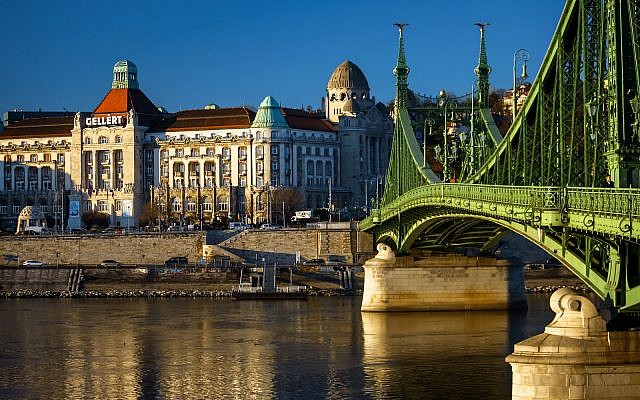 Of Budapest’s many Jewish houses of worship, several delineate this historic district. Start, naturally, at the Dohány Street Synagogue, an 1850s landmark whose Moorish towers are crowned by twin onion domes. There’s a lot more to see here beyond the lavish interior, as the synagogue anchors a complex of Jewish heritage sites.

One is the Hungarian Jewish Museum — at an address that once belonged to Theodore Herzl, and now offers a modern, multimedia introduction to a thousand-year Magyar-Jewish culture. But the most recent century is the emphasis here: The Heroes’ Temple is a 1930s addition that memorializes Jews who perished in the Great War.

And the sober reality of Budapest’s Holocaust ghetto becomes clear at the sight of more than 2,000 Jewish graves in the adjoining cemetery. Passers-by on Wesselényi Street get a glimpse of the weeping willow in Raoul Wallenberg Memorial Park, commemorating hundreds of righteous gentiles who saved wartime Jews.

A block away, the 1872 Rumbach Street Synagogue recently shed scaffolding to reveal its restored Moorish façade. The Hungarian government spent $10 million to salvage this treasure from the Golden Age of European synagogue architecture; it will become a cultural center.

The 1913 Kazinczy Street “Orthodox” synagogue completes a neighborhood trifecta by representing the Hungarian Art Nouveau, a folkloric aesthetic familiar to those who’ve spent time in the provinces.

Many Budapest temples, like the one on Kazinczy Street, boast inviting courtyards that nod to the city’s conviviality. Halfway decent weather means tables are full indoors and out, especially in the Gozsdu Courtyard, a series of pedestrian passageways dotted with workshops, cafés and pubs in the heart of the Jewish quarter.

But if you’re looking for Old World authenticity, you won’t find it here. You’ll find juice bars and Thai food and a curiously kitschy restaurant called Yiddishe Mamma Mia, where matzah balls and ravioli coexist in an homage to the owner’s twin culinary passions. Evenings bring crowds to Spinoza House, a café-theater with an eclectic menu and talent roster that would probably alarm its philosopher namesake.

Is all this less authentically Budapest? Surveying 1,000 years of Jewish community, you may conclude the debate merits another round in the courtyard, as Hungarians write the next chapter in their capital’s Jewish life.