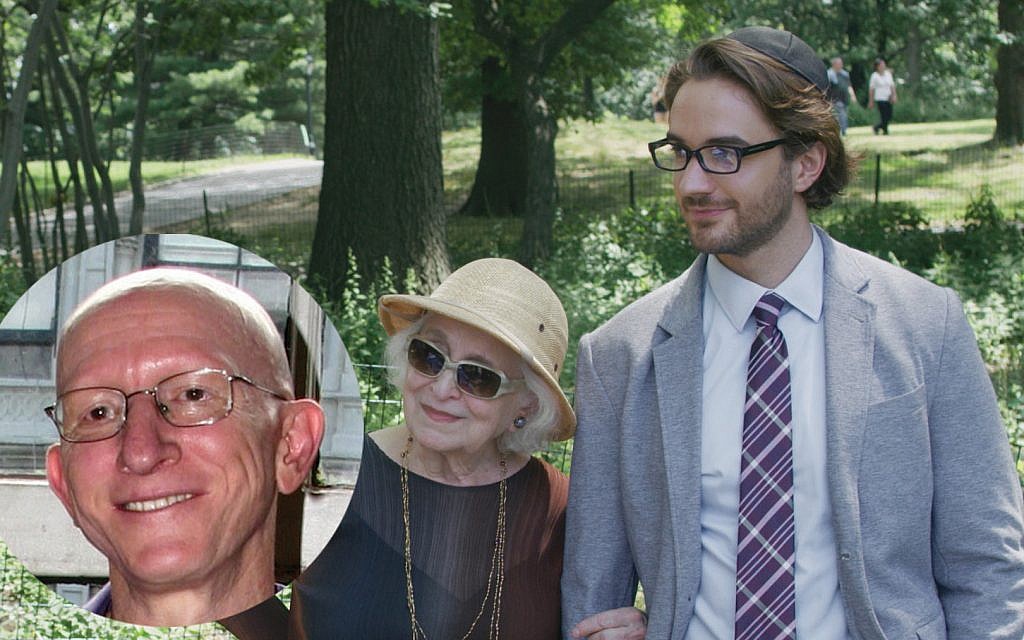 The film’s writer-director Jeff Lipsky, left. Rebecca Schull as a dying Holocaust survivor with an explosive secret with her doting great-grandson, played by A.J. Cedeno. Photos courtesy of Plainview Pictures

Everything you need to know about “The Last,” the startling new film by writer-director Jeff Lipsky, is right there in the opening scene. Members of a multi-generational family are standing by a small lake performing the traditional Jewish New Year rite of tashlich, symbolically casting the previous year’s sins away. The autumn sun is bright, if not particularly warm. One of them describes the act as an opportunity to “leave our old selves behind us.”

Lipsky’s cinematic shorthand is deft and quick. He introduces us immediately to group of self-identified Jews from a spectrum of levels of belief, a group of hyper-articulate, intelligent people who aren’t afraid to talk about ideas. And he cunningly plants the seed for the drama that will follow when 92-year-old Claire (Rebecca Schull) leaves her old self behind to reveal that she is not, in fact, a Holocaust survivor but an unrepentant Nazi.

That opening scene is structured around a series of medium shots that isolate two or three of the family members, anticipating the film’s overall structure as it explores their disparate reactions to Claire’s revelation.

Those reactions are predominantly expressed through talk. “The Last” is that rarest of birds — a film of ideas, a fiction film with echoes of George Bernard Shaw, Iris Murdoch and, tellingly, Ingmar Bergman. 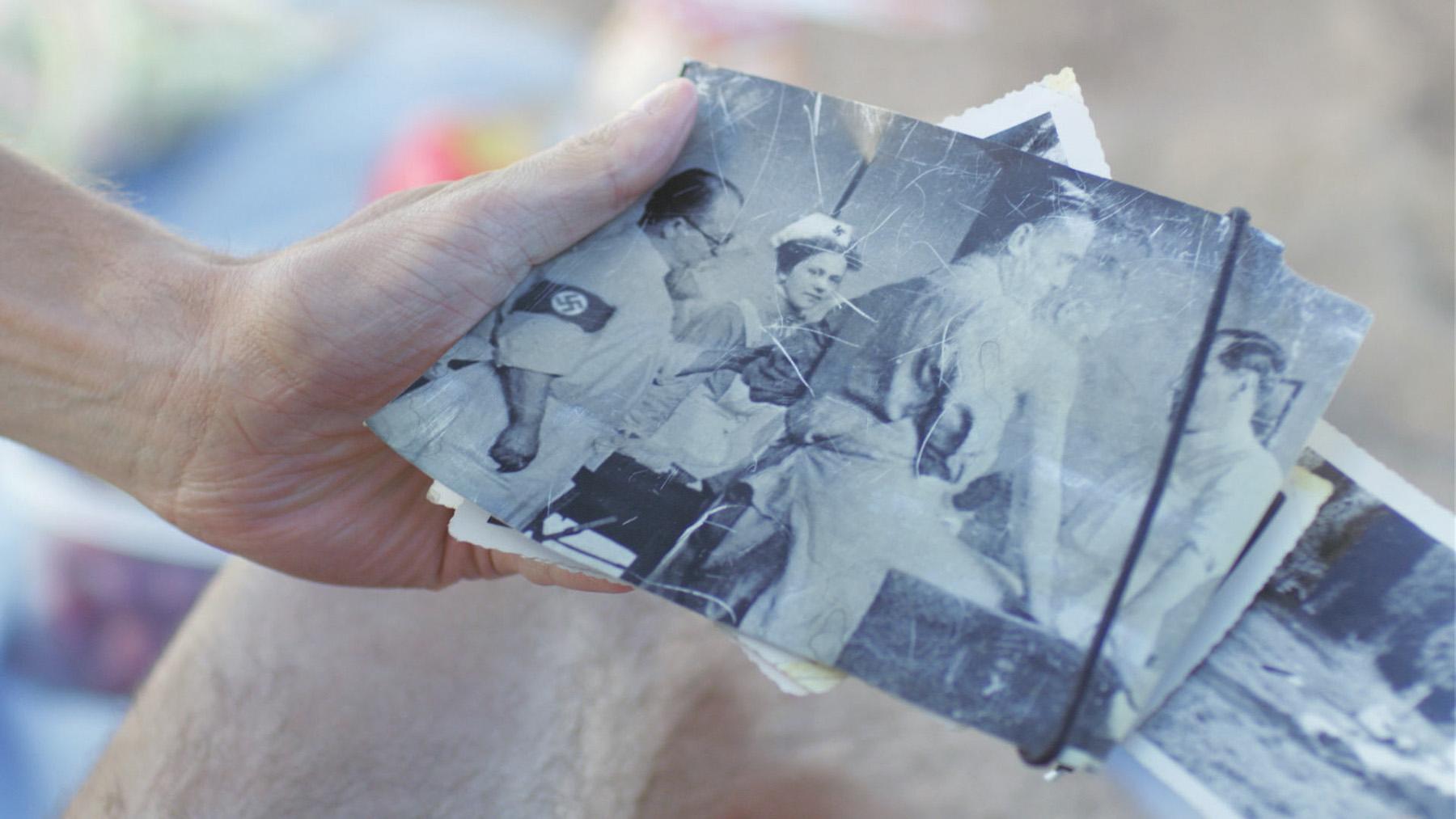 A mysterious photo that may hold the key to the story.

“Bergman is my favorite European filmmaker ever,” Lipsky said. “I always aspire to learn from Bergman every time I make a film.”

The echoes of “Scenes from a Marriage” and “Sarabande” are inescapable. Erlendur Sveinsson’s cinematography is suffused with sunlight that belies the darkness of the story and Lipsky’s use of long takes emphasizes the emotional currents flowing through his ensemble cast.

The joker in this deck is another favorite of Lipsky’s, Philip Roth. “The Last” brings together several Rothian themes: sex and other bodily functions, imposters, the aftermath of the Shoah and the splintery nature of American Jewry. And like Roth, Lipsky sees sexuality as a liberating force.

Lipsky grew up in Plainview, L.I., and was raised as a Conservative Jew. Ironically, the trigger for his screenplay was the odyssey of his nephew, who turned his back on the Conservative movement and became Modern Orthodox. He married a Catholic woman who converted to Judaism and, as Lipsky wryly noted, “is the most Jewish person in the family.”

That joke has its own echo in the casting of the film. Schull, who plays the Nazi, is the only Jewish actor in the cast.

Then again, Lipsky has played that particular card before. In his excellent 2006 film “Flannel Pajamas” Schull plays the protagonist’s deeply anti-Semitic mother-in-law and she is, of course, the only Jew in the cast.

Schull and Reed Birney, who plays an Art Spiegelman-type graphic novelist, are Lipsky veterans. Indeed, they constitute a mini-stock company for the director, having been in four and five of his seven films, respectively.

“I find it so easy to write characters for people who have unlimited reservoirs of talent,” he said. “The scene in which Claire reveals her secret is an eight-page monologue, and it was the easiest section of dialogue I’ve ever written. I think subliminally I had Rebecca in mind when I was writing the script.”

Schull’s career trajectory is a fascinating one. She was already in her 50s when she made her first appearances on camera. Her television resumé is extensive, most notably her seven seasons as the acerbic Faye on “Wings,” and it wouldn’t have been hard to imagine her as a sort of Eve Arden for the ’90s. But her subsequent film and television work, particularly with Lipsky, mines a rich, darker vein, and she is the best reason to see “The Last.” Claire is one of the most complex and demanding characters in recent American independent film, at once both loveable and terrifying.

“This isn’t a woman who was a straightforward Hitler Youth,” Lipsky said. “Her protector and mentor, Dr. Carl Clauberg [a real historical figure], didn’t start out as a hideous monster, either. I want to ask the audience to put themselves in her position.”

That imaginative leap, one that may prove difficult for audiences, is of a piece with Lipsky’s entire oeuvre. “I want all my films to be provocative,” he said. “People shy away from duality, but I feel they are rooted in truth.” ✿

“The Last,” written and directed by Jeff Lipsky, will have a special screening on Tuesday, March 5 at the Marlene Meyerson JCC Manhattan, 334 Amsterdam Ave., jccmanhattan.org. The film opens March 29 at the Angelika Film Center, 18 W. Houston St., angelikafilmcenter.com.