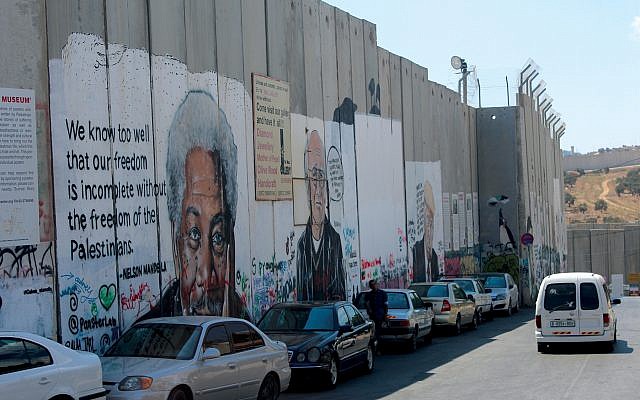 The recent cartoon in the international edition of The New York Times — the one with a blind, yarmulke-wearing Donald Trump being led around by a dachshund-shaped Benjamin Netanyahu with a Star of David collar — reminded me of the images I saw on Israel’s border fence when I visited Bethlehem and Ramallah last summer. But those spray-painted and stenciled pictures seem understandable. Among the memes and quotes from leaders like Nelson Mandela, displayed across a few concrete panels, was an image of President Trump wearing a yarmulke. In another, he embraced Israel’s prime minister. It sent a myriad of messages about Jewish influence, drumming up anti-Semitic ideas of Jewish power.

We left Jerusalem and entered into Area A, which is under Palestinian Authority control. Israelis are forbidden from entering. The security wall is the first thing you notice after passing a checkpoint. It’s an unfeeling structure that makes daily life for many Palestinians wretched. The minutiae of modern living — commuting to and from work, visiting relatives, shopping — is made more difficult.

The only obvious resistance against the wall is the graffiti. The wall was covered with hateful words and images that made my neck bristle. It contained images from the animated TV show “Rick and Morty,” a cartoonish Larry David as Bernie Sanders, and other recognizable images that advertised angry anti-Jewish and anti-Israel rhetoric, packaged into meme-ified poster art.

Art has often been the only form of protest from the little guy “punching up” against the big man. Ultimately, it has not been destructive here, because art can’t be victorious against a wall backed by millions of dollars of support. The pictures underscore the utter powerlessness of the transmitter.

Cartoons historically have been used to usurp power from hegemonies and leaders. Nineteenth-century political cartoonist Thomas Nast went after Boss Tweed’s graft and the U.S. government’s treatment of Native Americans; I discovered his power in my sixth-grade social studies book. As a teacher myself, I educated my classes about the muckraking journalist and documentary photographer Jacob Riis, and his effect on the 20th-century Progressive movement. His work helped dismantle monopolies, improve working conditions and shape pre-WWI life. But his moving photographs were in newspapers. They had credibility and backing, and used power as a force for good.

Cartoons are different when they reinforce power and hateful ideology that already exists, especially when they are supported by governments in efforts to spread propaganda. The anti-Semitic cartoons that aimed to sustain old ideas of Jews as hook-nosed, all-powerful beings had a different sort of power when they were being disseminated by the Nazi government. They were used as tools to radicalize the citizens and promulgate ignorance. The regime used editorial art to remain in power as well as coerce and grow in power. West Bank residents, on the other hand, use iconography because they feel powerless. Like citizens of East Berlin torn apart by the wall, they use to cope and rebel. A little graffiti is a powerful statement when the artist must defy armed soldiers looking out from guard towers.

The Times is a powerful machine. It’s the paper of record among a media community that itself is powerful, and there’s a responsibility that comes with that power.

When a magazine (even a satiric one like Charlie Hebdo) publishes a picture of Mohammed, it is using its platform to offend the millions of powerless Muslims throughout the world. The image is not used to shine a light on an injustice or empower those who lack it. An image like that incites rage. It hurts otherwise average civilians. A billion of them. That editorial decision seemed like an abuse of power.

The Great Depression gave Americans protest folk songs that focused on injustices across cities and rural areas. By bringing attention to them, singers like Woody Guthrie gave command to the otherwise vulnerable — farmers hurt by the historic droughts, unemployed city dwellers on relief lines, migrant workers looking for a better life in a country that did not offer such a good life to its own citizens.

These art offerings bite away at power. But they’re small fish, offering mere nibbles and only the illusion of agency and autonomy. In reality, very little changes. No cans of spray paint or winks at hipsterdom change life on the Palestinian side of the border wall. Teen rebels and street artists are punching up. And the fist is attached to the body that is still stuck behind bars. A harmonica-playing balladeer is no match for a cartoonist in Harper’s Weekly.

The media is a force of power and it harbors the extra duty to be impartial as the last defense of a democracy. A kipa-clad Trump on the border wall is a symbol of powerlessness and defensible and legitimate anger. It’s a representation of a people’s struggle for normalcy and survival. A political cartoon in the paper of record signaling the Jewish World Order is an endorsement of a dangerous and false claim. Influential first-class airline passengers from Taipei to Kuala Lumpur saw the image in airport lounges. This gives fuel to the hate speech of anti-Semitic leaders like British Labour Party leader Jeremy Corbyn and Malaysian Prime Minister Mahathir Mohamad, who once said that “Jews rule this world by proxy.” All Mohamad has to do is hold up the paper to his 32 million citizens.

The weekend that The Times cartoon appeared marked the end of Passover and the start of Holocaust Remembrance Week. It was a weekend scarred with the shooting at a San Diego synagogue. When Holocaust survivors opened the papers and read the news, Nazi Germany did not seem that distant a memory.

Eli Reiter, a regular contributor, is a storyteller and teacher.