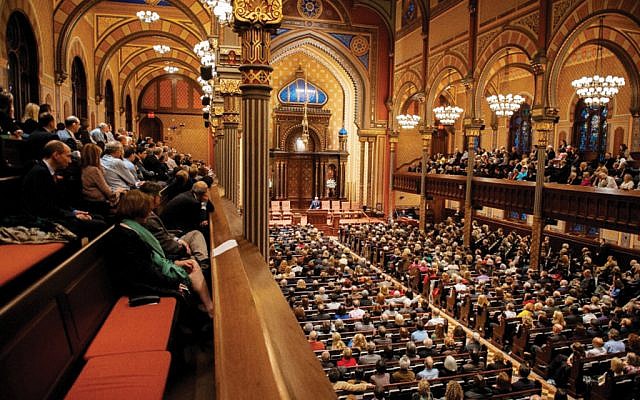 In the moments just before Yizkor, an eerie mood comes over the sanctuary.

A number of regular congregants hurry out. Despite some rabbis’ pleas that worshippers stay in the room to commemorate Jewish martyrs and heroes, superstition prevails. Children and adult congregants whose parents are alive exit for fear that their presence during the memorial prayer for the dead invites the evil eye. Unfamiliar people shuffle in — mostly elderly ladies wearing formal, if dated, suits or casual slacks. Many of the ladies clutch pocketbooks.

This group appears in synagogue four times a year (Yizkor is recited on Yon Kippur, and during Passover, Shavuot and Sukkot.) They come only for Yizkor, their time to pay public homage to deceased relatives.

The doors to the sanctuary close to keep out the din of those who have just left and are socializing in the hallway. The rabbi gets up inside the sanctuary to speak to the newly convened congregation before beginning the Yizkor service. He or she opens with some readings, perhaps a few verses from Psalms. In a measured, consoling voice, the rabbi talks about the grief of losing beloved parents, the heartache of going through the rest of life without an adored spouse, the tragedy of burying a child, the deep sorrow death brings to those left behind. The rabbi speaks about the valiant lives and noble legacies of deceased relatives, seeking to honor their memories and bring consolation to those in the room.

But there are people in the room preparing to say Yizkor whose hearts hold complicated feelings. See the middle-aged woman in the third row, the one with the double strand of pearls? Her mother abused pills and neglected her family. And the distinguished bearded man in the aisle? His father beat him and terrorized his siblings. The stunning blonde woman with the adorable baby? Her twin sister suffered from recurrent mental illness and died of suicide. How about the uncomfortable-looking teenager in sneakers slouching in the back? His mother died when he was a small child and he has no memory of her at all.

Many struggle with lingering resentment. For others, uppermost in their hearts is relief that years of struggle are over. The rabbi’s comforting words don’t work so well for any of them. They stand, present in the room but outside the perimeter of loving memory. They feel alone, erased and ashamed.

At this point, a few well-chosen words would go a long way. While rabbis cannot possibly know the back-stories of all those who come for Yizkor, they should assume variety and texture to peoples’ lives and intimate family relationships. Education and experience in pastoral counseling teach clergy that families are complicated. People can feel love, loyalty, hate and anger towards those closest to them — sometimes all at the same time. Rabbinic work also teaches that traditional observance can be a useful way to hold and metabolize powerful feelings of loss — whether they be sadness at the absence of a cherished relative or desolation for a relationship that was painful and can never be righted. Shiva, Kaddish, yahrtzeit and Yizkor each offer opportunities in the intimate experience of bereavement to remember and reflect.

Thus, in those poignant moments before Yizkor, rabbis should indeed intone compassionate, kind words about loss. They can also add a few words that signal inclusion to those in the room who harbor dark pain towards the deceased at the same time that they look to Jewish tradition to help make meaning of a conflicted relationship. Something like, “And for those of you who have complicated feelings about the person for whom you are saying Yizkor, you are here, too, and we honor your presence among all those who come to remember.” That might be enough.

Dr. Michelle Friedman is a psychiatrist who holds the chair in pastoral counseling at Yeshivat Chovevei Torah.