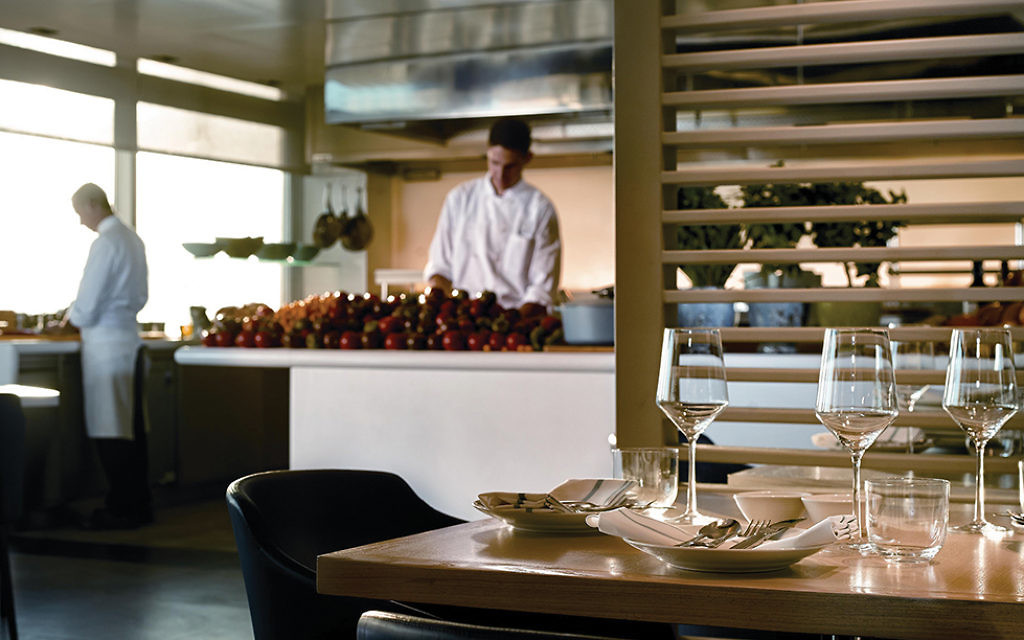 When the Aubergine restaurant opened 15 years ago in the David Intercontinental hotel in Tel Aviv, it marked a new day in Israel’s culinary scene. Here was what critics were calling a really fine Israeli-Mediterranean-French eatery, with dishes crafted by executive chef Alon Hirtenstein, and it was kosher. And it wasn’t a free-standing storefront restaurant. It was tucked into the hotel’s atrium lobby.

It was, arguably, the beginning of a trend, as upscale Israeli hotels began to reposition themselves by tweaking or upgrading their high-end kosher offerings. The trend is being swept along by the popularity of celebrity chef shows and the increasingly sophisticated culinary tastes of travelers and business executives.

“If you are a luxury property, you must offer guests a range of dining possibilities, including a signature chef’s restaurant and not just a dining room,” said Rafi Baeri, vice president of marketing and sales for the Dan Hotel chain, which runs the prestigious King David Hotel in Jerusalem and Dan Tel Aviv. “Many guests usually stay more than one just one evening, so you have to vary what and where they are eating in the hotel, and based on our experience, most guests will want to indulge themselves in a high-quality meal.”

Both the King David and the Dan Tel Aviv showcase first-class kosher restaurants — La Regence in the former and Hayarkon 99 in the latter. “For restaurants of this caliber to be successful, you have to invest in creative thinking because these restaurants are small in size but labor intensive, meaning you have to not only have a great chef but also an extremely attentive staff of waiters, sommeliers, etc., as the service is part of the show,” Baeri explained.

Though La Regence existed in the King David Hotel since before the birth of the State of Israel (prior to becoming part of the Dan Hotel chain), the restaurant, which highlights classic French cuisine and service, started garnering headlines when executive chef David Bitton took over seven years ago.

“Historically, it’s the oldest kosher restaurant within a five-star hotel in Israel,” said Elie Fischer, who heads the food and beverage department at the King David Hotel. “It became kosher after the Federmann family, owners of the Dan chain, purchased the King David in 1957.” Chef Bitton, Fischer said, has raised the profile of the restaurant, largely through his use of the “slow cooking” technique.

Fischer said that Bitton’s reputation is such that top chefs from France, including those who have received an elite Michelin star ranking, annually visit the King David Hotel in order to learn about the challenges of kosher cuisine and cook new dishes with the chef.

According to Chen Broner, assistant general manager of food and beverage at the Dan Tel Aviv, the Hayarkon 99 restaurant, which opened in 2009 and is helmed by chef Oved Alfia, has become a popular spot not just among the hotel guests, but also within the local business community as well.

“During the past few years, chef Alfia has made a tremendous impact with the restaurant; guests from other hotels have flocked over to the restaurant, as well as local business executives and even members of Israel’s Foreign Ministry, who want to entertain their foreign guests in a high-end restaurant that is not overly expensive.”

Alfia, Broner said, is something of a locavore, making use of the freshest ingredients that he purchases from the local fruit and vegetable market, fishermen and cattle farms.

Over in Herzliya Pituach, the Ritz Carlton Hotel last year became the first luxury facility in the global chain to feature a kosher chef’s restaurant. The restaurant, which is called Herbert Samuel and overlooks the Herzliya Marina, is the kosher culinary flipside of the iconic non-kosher Herbert Samuel restaurant in Tel Aviv, which is run by Adi’s Lifestyle Group.

“Today people are more health-conscious when it comes to dining out; even the more traditional kitchens favor lighter and healthier options, such as the growing trend of avoiding high-fat dairy products, like butter and cream,” said Herbert Samuel’s chef, Kobi Ohayon. “Our menu gives diners the opportunity to indulge in an elevated kosher experience without losing the flavors and richness of fine dining cuisine. … I offer them a ‘new kitchen’ experience Israeli-Mediterranean style where there’s a healthy dose of olive oil and fresh ingredients.”