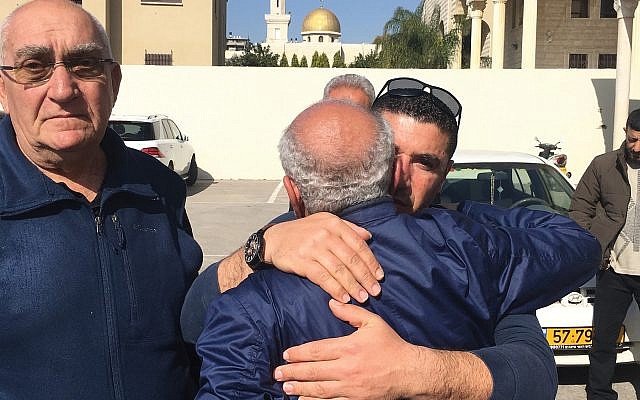 A well-wisher hugs the father of slain Israel Arab woman before her funeral in Baqa al-Gharbiyye. Nathan Jeffay/JW

Baqa al-Gharbiyye, Israel — The father in front of me expected to soon travel around the world to see his daughter. Instead, he just flew her back to Israel, after she was brutally raped and murdered.

We were squeezed in a small car, headed from the funeral to his house. The young woman whose story had Australia weeping for days was finally home, in Israel. “I hope she’s now in paradise,” her father Saeed said to me as the engine started.

Aiia Maasarwe, 21, grew up here, near Netanya. She had gone to broaden her horizons with a stint in a Melbourne college, and was killed Jan. 16 in a senseless attack. It shook Australia, and dominated Women’s Marches there. “We march today and think of Aiia,” banners read.

As Australia reacted, Israel absorbed the news, and in particular the 1.7 million-strong Israeli-Arab community, which Maasarwe hails from, started mourning. Tradition here is to bury the dead soon after passing — just like many Jews — so the need to wait long days to receive the body added extra sadness to the tragedy. 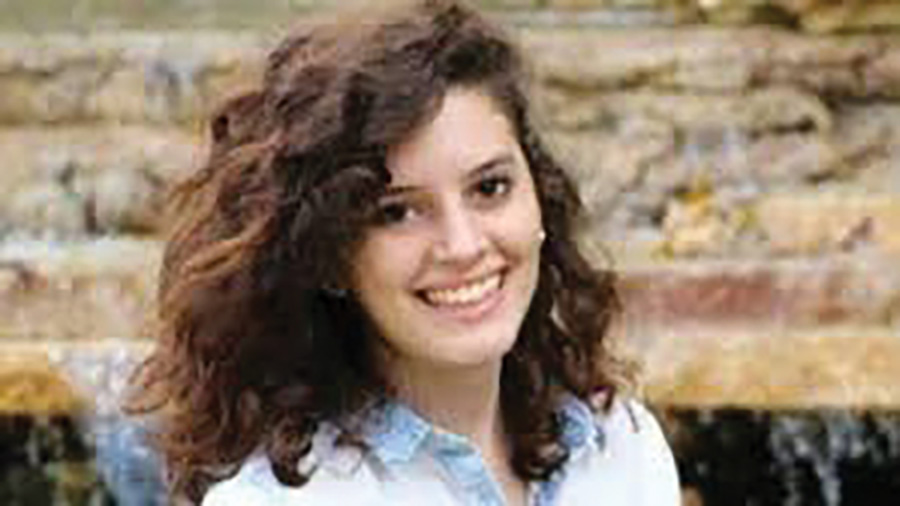 Finally, the body landed, and thousands of people poured into the streets, ready to escort her from her home to the mosque, and on to the cemetery. There, her family said farewell, before heading to a mourning hall for speeches.

At the funeral, I realized how the act of a single man (a suspect has been arrested) sends shockwaves across the world, and how pain crosses the border of countries and cultures. I saw the ties that bind people in Israeli society, with Jewish mourners coming to comfort and embrace this Arab family, and reflected in how leaders sometimes fail to promote this solidarity that connects citizens.

It had been a week since the murder and Israel’s Prime Minister Benjamin Netanyahu had failed to speak about the tragedy or contact the family.

Her uncle, Abed Kitteny, told me the day before the burial that the prime minister acted in an “ugly” and “uncultured” manner. He believed that Netanyahu did so because he didn’t want to be seen as being friendly to Arabs during election season, as it could hurt his appeal on the Israeli right. (He only contacted the family after the funeral.)

Palestinian politicians also upset the family, as the drama of the funeral unfolded. Mourners were stunned when her family silenced the Palestinian president’s envoys, angry that they were politicizing the event. Hundreds of people were waiting for a Palestinian official to read a statement from President Mahmoud Abbas when a cousin from New York, Sharef Maasarwe, interrupted and said he won’t tolerate the “twisting” of the tragedy into a political matter.

He declared: “We, as a family, say this is not about politics.” The PA’s delegation was large, plus there were Israeli-Arab politicians who are in the midst of an election fight, so mourners had been expecting political speeches.

After being cut off before reading their boss’ statement, the Palestinian delegation headed outside and grumbled to local officials. The statement was read in the open air. Altayeeb Ghauayen, a spokesman for the local municipality, told me that the Palestinian representatives felt “humiliated.”

I was with the Israeli-Arab academic and Haaretz writer Abed Azab, who turned to me, stunned, when the family silenced the PA. It was an unusual show of assertiveness, he said, towards an Arab leader.

He noted that this family, as Arab citizens of Israel, dared to reject PA leaders, while nobody living in an area controlled by the PA would dare do so. It says a lot that Arab media who were in attendance self-censored the family’s rejection of the PA officials.

Hopefully, the Maasarwe family sent a message to both Israeli and Palestinian leaders that personal grief shouldn’t be used, except with consent, for political ends. They also taught an important lesson about dignity.

Often, when tragedy strikes, people lash out at anything associated with the pain, including the place of the tragedy and the people who are there. This family had nothing bad to say about Australia, and only praise for its people and leaders.

The dignity ran in two directions. Australia’s ambassador in Israel, Chris Cannan, read a statement at the funeral from Australian Prime Minister Scott Morrison. “The goodness of her life stands in contrast with the darkness that took it,” he said.

Australians “are grateful that Aiia chose to live and share her rich life amongst us, and we are heartbroken that such a despicable crime could occur. We are asking, ‘What must we do to stop it happening ever again?’”

As I drove out of Baqa al-Gharbiyye and the radio’s soundtrack switched from Arabic to Hebrew, I found myself reflecting on another aspect of the Maasarwe aftermath. Excluding the shenanigans of politicians, it had been a week of remarkable solidarity — solidarity from Israelis of various backgrounds and solidarity from the general population of Australia to Aiia’s family.

In fact, in Australia, the two groups that felt a particular connection to the loss were those with an Arab background, and Jewish Australians. Organizations in the Jewish community rushed to pay tribute and offer support.

So often, the Arab-Israel relationship is framed only as “conflict.” But consider that the Jewish community in Australia probably felt more connection and showed more solidarity to this family than it would the case of any other non-Jewish foreigner, because of her Israeli nationality. Sometimes the Arab-Israel relationship can be a remarkable thing — a dynamic that leads diaspora Jewry to expand its family to include non-Jewish Israelis.

There is no message from Aiia Maasarwe’s murder. But it was fitting that a woman killed in such a horrific attack was laid to rest with dignity and solidarity that crossed continents and cultures.