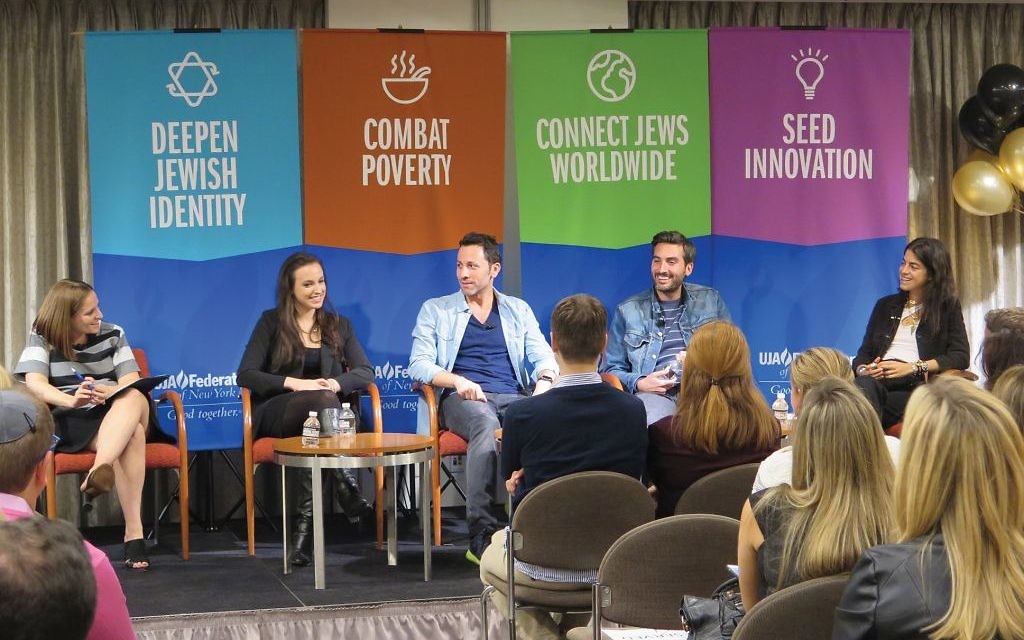 The event is about to begin — please power all devices on. That’s how UJA-Federation of New York began its annual kickoff event for its younger donors last Thursday evening.

The unconventionality didn’t stop there. While in the past, the kickoff has featured industry titans to inspire the crowd of budding Wall Street professionals, bankers and lawyers, this year Leandra Medine, the 26-year-old fashion blogger better known as “Man Repeller,” presided with Kate Siegel of the CrazyJewishMom Instagram handle, and Andrew Steinthal and Chris Stang, the foodies behind the social media handle Infatuation. The three self-employed insta-success stories each command a personal audience of between 350,000 and 1.1 million social media followers.

“This is not your grandmother’s UJA,” said Aaron Zises, co-chair of UJA’s Emerging Leaders and Philanthropists division, who gave the evening’s opening remarks. “We wanted panelists who could relate to a completely different crowd.”

The evening, with a turnout of nearly 250, had all the hallmarks of millennial success. Audience members tweeted questions at the panelists, who responded with humor, sarcasm and generous irreverence. First-time attendees wore little yellow emoticons (smiley faces used in text messages and social media) to indicate their status.

“Millennials have a violent intolerance for anything inauthentic,” said Medine, reflecting on her journey to social media stardom. The fashionista wore a black blazer, off-the-shoulder white top and her trademark mash-up of necklaces and bracelets. “You have to be real. Followers want to hear your real voice.”

Philanthropies are taking heed. For UJA-Federation, the panel was the latest in a series of events geared towards a younger audience, including leadership seminars, volunteer missions and affinity giving groups in which like-minded young professionals join forces for a philanthropic cause. With experts predicting that next-generation philanthropists are less likely to donate to umbrella organizations, opting instead to support smaller causes where the impact is more readily apparent, targeted events such as Thursday’s panel aim to shift appeal back to federations.

“The donor base is shrinking, and that is concerning,” said Zises, 32, who works in wealth management at a bank. Though he has not felt the trend in his immediate peer group, he stressed the need for innovation to draw in young participants. “People are always interested in giving to sexy causes — it takes time to show them that immediate responders are just as important,” he said, referring to the ability of established organizations like UJA to respond immediately to natural disasters and other sudden crises.

For the evening, though, the line between sexy and philanthropic blurred as the packed room of 20-somethings eagerly awaited the insights of Medine and company, who reflected on success, fame and crazy fans. Though none of the three produce particularly Jewish content, all of them confessed to the influence of their MOT upbringings.

“I think my mom is typical of a lot of crazy moms — just a lot more Jewish,” joked Siegel, who has gained a following of nearly 800,000 by posting screenshots of conversations with her … well, crazy Jewish mom. “Applying for college was a freakin’ nightmare with my mother,” she said, eliciting a sympathetic laugh from the audience. Interviews with Buzzfeed, ABC News and England’s Daily Mail catapulted what began as an amusing pastime into a trademark brand in less than a year. Of the three, Siegel’s journey to Internet fame was the most instantaneous.

“One day I was just another user on Instagram, and the next day I had thousands of followers,” she said.

For Medine, the most well known of the three, fame comes with serious responsibility, especially as a self-proclaimed Zionist. After the 2014 Israel-Gaza conflict, she began wearing a bracelet with an Israeli flag on it in order to combat the anti-Israel sentiment she faced among her fashion peers.

“I was at a fashion dinner biting into my tuna tartar when the woman sitting next to me started up a conversation with ‘Isn’t it terrible what Israel is doing to the poor Palestinians?’” she said. “I realized I had to educate myself about what’s going on so I could substantiate the Israeli side,” said Medine, a graduate of the Orthodox Jewish day school Ramaz. That summer was the first time she felt “vulnerable” as a Jew in New York City. “I felt a moral obligation to wear the bracelet — I want to be unflinching about how pro-Israel I am.”

Aside from her Zionist leanings, for Medine, navigating between Jewish life and professional life is most difficult over Shabbat and holidays. During the thick of fashion week while traveling in Paris, she went off-line for the High Holidays. “People were very impressed that I was willing to take off,” she said.

Though her level of ritual observance is equivocal, Medine said she’s trying something new.

“I’ve been trying this thing called a 24-hour tech fast,” she quipped. “I think some Orthodox Jews have tried it — they call it being ‘shomer Shabbat.’”

Steinthal, who does not reference his Jewish identity at all in his posts, joked that the only backlash he received was for eating shark.

“It was kosher shark, I promise,” he joked.

Still, the subject of millennials and philanthropy did not evade the panelists, who addressed the phenomenon of “slack-tivism ”— young people who are activists on their Facebook walls and Twitter feeds, but fail to show up at local charities or volunteer organizations.

“I think young people ‘liking’ something on Facebook is the digital equivalent to attending a rally,” said Medine, who felt the accusation of apathy was unwarranted. “People do take a moral stance online—social media is like a megaphone that we can use however we please.”

Steinthal also came to the defense of his generation, adding that while millennials may not be as philanthropic as boomers or Gen-Xers, they are very well-informed. “You can share information so quickly that everyone knows what’s up — that’s definitely a good thing,” he said.

Whether or not insta-celebrities are contemporary artists was a matter of debate (Medine poked fun at the young man who asked the question, starting her answer with, “OK, Socrates,”) but the trio took the question seriously and attendees seemed to leave feeling satisfied, and thoroughly entertained.

“The true challenge is follow-up,” said Zises. “One evening with Man Repeller will bring young people in. We have to figure out how to make them come back.”