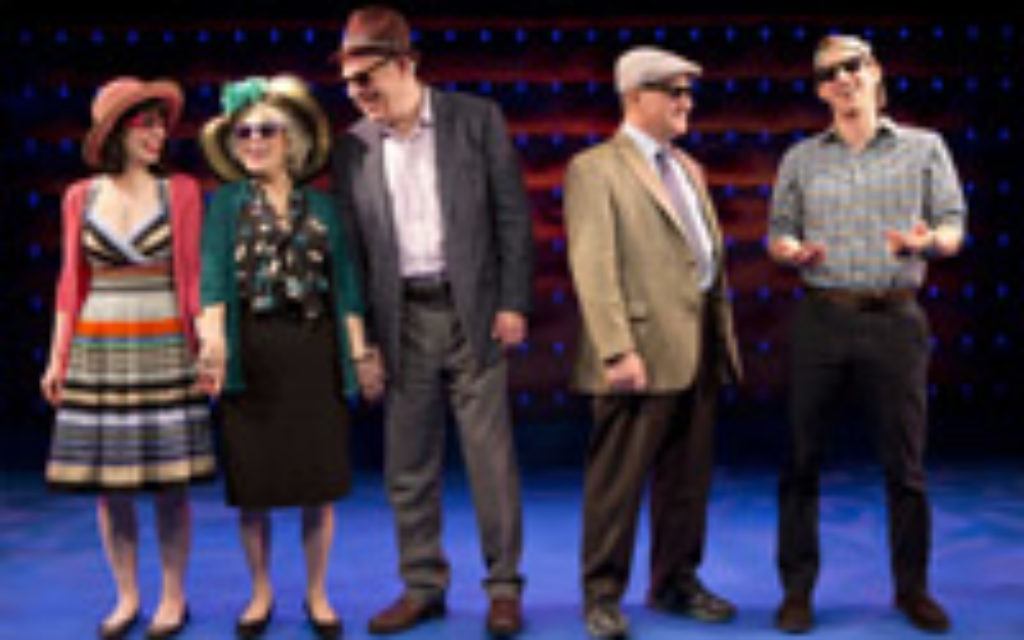 Knocking both critics and audiences dead with laughter, Peter Gethers’ and Daniel Okrent’s “Old Jews Telling Jokes” is a bona fide hit. The show possesses, according to The New York Times, the “magnificent, enduring rhythm of Jewish humor.” The New Yorker crows that the “laughs-per-minute average is as high as anything you’ll find on stage right now.” And Variety says, simply, “You’ll laugh your tuchus off.” But two months into its Off-Broadway run, does the show deserve all the hype?

Based on Sam Hoffman’s popular website of the same name, which features seemingly ordinary people against an ethereal white backdrop in a kind of celestial joke-telling mode, “Old Jews Telling Jokes,” directed by Marc Bruni, seems tailor-made for the stage. And the five actors cast in the show are so winning that it is not hard to imagine that you have wandered fortuitously into their living room, a space complete with a flat-screen television that, along with a back curtain that looks like an overgrown piece of matzah, serves as the show’s only real set.

This cast is a wonderful mix of actors: Marilyn Sokol, who sounds like a ditsy Katherine Hepburn with a Bronx Jewish accent; Lenny Wolpe, who is avuncular and blustery; Todd Susman, who is nebbish and mischievous; Audrey Lynn Weston, who is demure and seductive; and Bill Army, who is simply boyish and buoyant. Each plays a particular Jewish character who has his or her own back story, enabling the jokes to give way periodically to nostalgic, “Chicken Soup for the Soul”-type monologues, such as when one character recalls reacting to the news of his father’s cancer by firing off a barrage of one-liners, or when another reminisces about the good old days when Jews formed friendships around listening to Allan Sherman parodies and Mel Brooks routines.

What makes the casting especially noteworthy is that Weston and Army are both young, which given the title, gives the show a different kind of energy. But it’s clear that the real pros here are the older folks: Sokol, for example, screwing up her face and adopting a goofy grin as she delivers a punch line (her routine as a lascivious ship-wrecked sheep is alone worth the price of admission), or Wolpe putting a joke over with a practiced, professional air even as he looks like he is getting ready to run for cover. Almost as hilarious as the actual gags are the sheepish looks on the faces of the actors as they wait for the audience’s gales of laughter to subside.

“Old Jews” essentially transports its audience “up the mountains” (as my grandmother would say) to the Catskills. In Borscht Belt jokes, Jewish men always felt murderous toward their wives, non-Jewish women were secretly more attractive to Jewish men than Jewish women were, rabbis always offered ridiculous advice, and gentiles occupied a rarefied realm that Jews could never hope to enter. The dated quality of the show is summed up in two of its most inspired routines, which are Susman’s heavily Yiddish-accented, solemn rendering of “Ol’ Man River” and a sing-along with the audience of Tom Lehrer’s “Hanukkah in Santa Monica,” a song about Jews discovering that Jewish life can (big surprise!) actually take root outside of New York.

This is where one needs to wonder if the show, despite having plenty of heart, has a soul. A non-Jew who wandered into the theater could be forgiven for thinking that Jews, despite being renowned for their intellectual attainments, are in reality obsessed with their lower bodies. Or that upwardly mobile Jews remain stuck in a low-class or unassimilated Jewish past that they have only transcended on the outside, but still inhabit in some nether region of their deepest selves.

It may be impossible to tire of these sorts of jokes; they do, after all express the kinds of anxieties that few of us ever manage to verbalize in our daily lives. And perhaps this isn’t the kind of show that is supposed to add up to anything, or have anything much to say. Still, I wish that “Old Jews Telling Jokes” — which could be called, more accurately, “Jews (and Non-Jews) Telling Old Jokes” — didn’t insult its audience’s intelligence quite so much. I’m reminded of Bryan Fogel’s and Sam Wolfson’s phenomenally successful “Jewtopia” (which played at the Westside in 2006), which trotted out every Jewish stereotype and excretory joke in the book, as if paradise for Jews is an eternity on the toilet.

Not that I’m a prude. But I can’t help comparing “Old Jews” to the second act of Bruce Norris’ “Clybourne Park,” the searing play about race relations that is currently running on Broadway. The characters in that play trade the most sexually explicit and utterly offensive jokes that they can muster, leaving the speechless audience to ponder the profound power of jokes to unsettle and provoke. Perhaps I’m asking too much, but I wish that “Old Jews” afforded some kind of new perspective on the place of humor in Jewish life, rather than yet another guilty peep into the bedroom or bathroom window.

Which reminds me: Did you hear the one about the newlyweds ordering the hard salami?