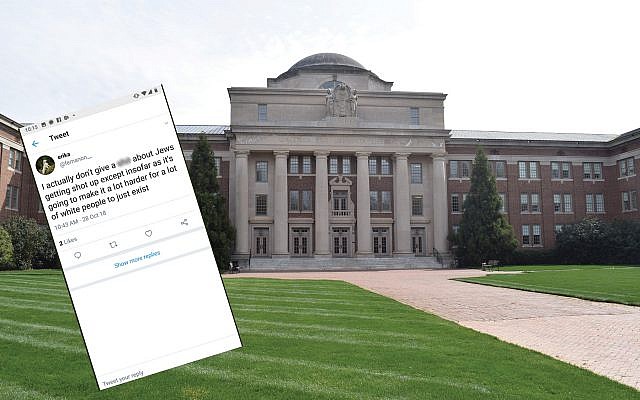 The alleged tweet from a Davidson student, who is no longer on campus. Screenshot/Twitter

‘I actually don’t give a s— about Jews getting shot up except insofar as it’s going to make it a lot harder for a lot of white people to just exist,” allegedly tweeted a Davidson College student (the dashes are mine). This tweet was one of many that had anti-Semitic, homophobic and racist content, reportedlyposted by a student who is no longer on campus. As a Jewish student, I felt endangered by this rhetoric, experiencing emotions I’d never felt before; I felt threatened.

I’m originally from Baltimore, and I identify as a Reform Jew. I came to Davidson from the Park School of Baltimore, the first nonsectarian independent school in the area, meaning it was the first Baltimore school to fully accept Jews, imposing no quotas or restrictions, and Jews are now the largest religious group on campus.

Coming to a small liberal arts college founded by Presbyterians in North Carolina, I knew I would be in a very different environment. It was something I looked forward to because I recognize the dangers of homogeneous environments; they lead to echo chambers, places where the same opinions are shared and where similar rhetoric and concerns are perpetually reinforced, ostracizing people with other views. Davidson has a Jewish population of roughly 5 percent; out of 1,810 enrolled students, about 90 identify as Jewish.

It was surprising to me when a petition to boycott Sabra hummus was posted in Davidson’s student (and alumni) Facebook group in the fall of my first semester. A group of students called on their peers to take action due to the American company’s tenuous link to Israel. A student proceeded to post, “If you support human rights (which is another issue within of itself), then by definition you cannot support the existence of the state of Israel.”

But when the neo-Nazi twitter incident occurred later in the fall of my first semester, the Sabra hummus “debate” was reduced to background noise. The tweet took the situation to a whole new level and I was taken aback, since the incident came right after the Pittsburgh synagogue shooting during a time when Jewish people were trying to come together on campus.

“This fall was one of the most emotionally taxing semesters I have spent at Davidson,” said Charlotte Smith ’19. “As Hillel co-president, I felt the burdens of both representing and supporting all the college’s Jewish students fall squarely onto my shoulders. It illuminated for me how much more the college could be doing to support its Jewish students.”

Josh Lodish ’22, the co-president of Davidson Hillel, expressed similar sentiments: “When I found out there was a neo-Nazi on campus, it was the first time in my life I genuinely began to fear for my safety because of my religion.”

Like Smith and Lodish, the emotions I felt after the incident were intense. Having received no official message from the administration the same night the student was doxed (outed online), I went to bed unsure of whether or not I would feel safe going to class in the morning. For the first time in my life, I questioned if I could trust sharing the Jewish part of my identity with people, a horrible thought that I wish I had never had. It showed submission and weakness.

My parents reassured me, encouraging me not to let this cruel person diminish my confidence. Our campus chapter of Hillel met to debrief and offer support to each other. It was relatively easy for me to bounce back and focus on school, however, I realize this is a privilege that most minorities don’t have.

People don’t see me and automatically think I’m Jewish. My full name — Elizabeth Kane — does not make me stand out in a crowd. I recognize that the students of color on Davidson’s campus are not as lucky as I am. At a predominantly white institution, I can only imagine how their skin color affects their everyday lives. While I felt out of place for a short while, how often do students of color experience this discomfort and uneasiness?

In the weeks after the alleged neo-Nazi was exposed, students were left wondering what was happening with the tweeter and her boyfriend, who turned out to share similar views. I was sympathetic to our administration as I realized a lot of the information was confidential. Soon after, the campus was told that the two students would not be coming back to school in the fall, but other questions were still percolating.

Now, I’m five weeks into the spring semester. Jewish students finally received an email from one of the campus chaplains with a link to a survey in an effort to “continue enhancing the experience of all Jewish students at Davidson” and two times to sign up to have in-person discussions with him, Hillel’s adviser and the dean of students. It was also shared that the current campus rabbi is leaving to pursue a job opportunity elsewhere.

I’m disappointed that it took the administrators this long to ask questions about the inclusive nature (or lack thereof) of our campus. Yet, I’m encouraged by groups of students, such as those who have drawn up a petition to start a Jewish studies program on campus, even though that will not come close to ending the anti-Semitic sentiments that still ravage our world. However, it’s tangible evidence that people are trying to find solutions to a problem. It led to the college adding a new, two-year position for a “Visiting Assistant Professor – Modern European History/Jewish Studies.”

“I believe this job posting is timely and necessary. Davidson needed to address this curricular gap for far too long, and it has been incredible to see Jewish Studies become an institutional priority,” said Severine Stier ’19, a member of the group that created the Jewish studies petition.

While this is a step in the right direction, there is still more work to be done. I love Davidson. I have been exposed to a variety of people who come from a variety of backgrounds — culturally, socioeconomically and politically —and I’ve learned a ton already as a first-year student. However, I do believe that Davidson could do better in educating its student body on Jewish culture and identity. A close friend of mine, at the age of 20, didn’t even know what Shabbat is, let alone the deeper history of the religion.

Even though we are a group of people who make up less than 1 percent of the entire world’s population, and a minority group that is generally thought of as privileged, I feel that Jews are a group deserving more exposure on campus, nonetheless. Davidson needs to provide better resources to help non-Jewish students gain a greater understanding of Jewish history and traditions. The new opening for a professor of Jewish studies is a start to trying to better inform Davidson students about the Jewish religion and ethnicity. I hope the administration continues to take action, allowing my love of the school to be bolstered by my pride.

Elizabeth Kane is a freshman at Davidson College.