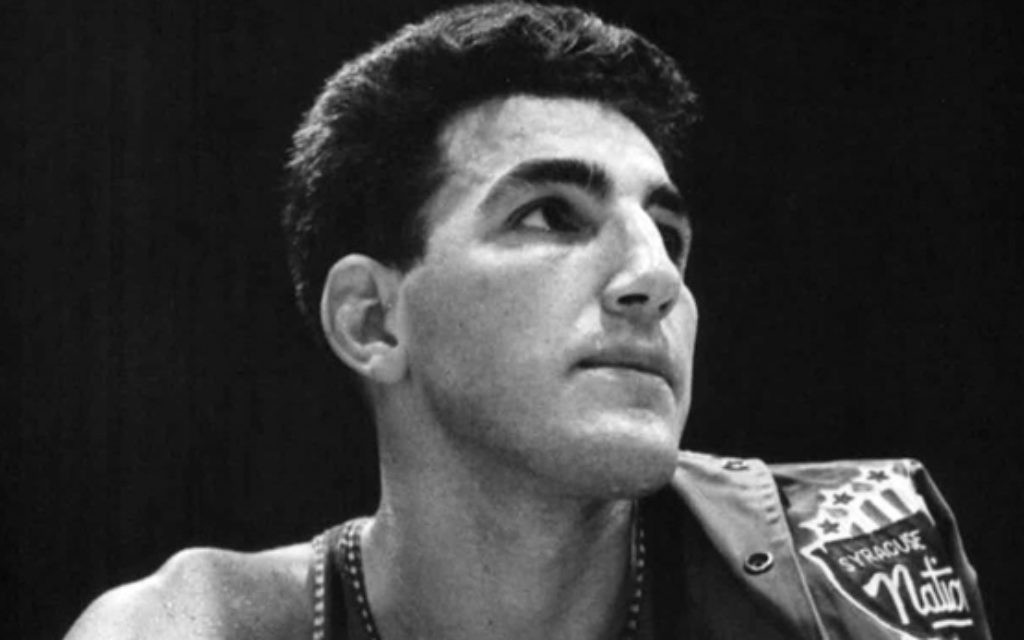 In the early days of professional basketball in this country, the sport was largely a city game, played by upwardly mobile athletes from working-class families — often with immigrant roots — who used their shooting and defensive skills as their ticket to a better life.

In the country’s big cities, which supplied many of the National Basketball Association’s early players, Jews were a substantial part of the population, which meant that they constituted a disproportionate part of NBA players. On the opening day roster of the New York Knickerbockers, the team founded in 1946 as part of the NBA-precursor Basketball Association of America, were Sonny Hertzberg, Stan Stutz, Hank Rosenstein, Ralph Kaplowitz, Jake Weber, and Leo “Ace” Gottlieb — and Ossie Schectman, who scored what is considered to be the first basket in NBA history.

Of all the league’s Jewish players, Adolph Schayes stood out. The Bronx native, a son of immigrants from Romania, was, arguably, to professional basketball, what Sandy Koukax and Hank Greenberg were to baseball — the most prominent professional Jewish athlete to ever to play his sport.

Generally known as “Dolph,” he was, in the early years of the NBA, a superstar, a household name among sports fans, a perennial All-Star, a record holder and member of a championship team.

But in today’s ahistorical culture, Schayes’ name is little known outside of basketball maven circles. He was not the subject of a biography — until Dolph Grundman, a professor of history at Metropolitan State University of Denver, became interested in the topic.

The result is his social history, “Dolph Schayes and the Rise of Professional Basketball” (Syracuse University Press). The book concentrates on the eras in which Schayes played and later coached, and it is a tacit commentary on the changes in the sport that has come to be dominated on the court by African-American athletes and to a lesser degree by players from abroad. The main Jewish connection to the NBA now is in the owners’ box (at least a dozen of the league’s 30 teams have Jewish ownership) and in corporate headquarters (current commissioner Adam Silver succeeded David Stern earlier this year).

Of the three Jewish players in the NBA this season, two are Israelis, Omri Casspi and Gal Mekel (the third is Los Angeles-born Jordan Farmar), and the league’s only Jewish coach, David Blatt of the Cleveland Cavaliers, is a U.S. native who made his reputation while playing and coaching in Israel.

Schayes, an articulate man who was blessed with a modicum of talent that he maximized through hard work, was seen as a credit to the Jewish community. That’s very much unlike Donald Sterling, former owner of the Los Angeles Clippers, who was forced to sell the team this year after a racist rant went public; and Bruce Levenson, owner of the Atlanta Hawks, who said that he will sell the team after reporting this year that he had sent a similarly offensive email.

Grundman picked a fascinating subject, a more innocent time, for his book.

The attraction of athlete to author was obvious. “We shared the same first name,” Grundman writes in the book’s introduction, “and in the generation of the 1950s there were not too many Adolphs around. A German dictator made sure of that.”

Grundman’s book is equal part story of a single athlete (a secular Jew who grew up in a secular family in the Bronx) and the story of a sport. It’s social history with one player as the hook.

Two parallel storylines describe how Schayes, an admittedly plodding and sometimes-short-tempered player, matured into a center who became the face of the Syracuse Nationals. He curbed his emotions to become a clutch performer; he eventually settled in Syracuse and became a successful businessman. The father of now-retired, longtime NBA player Danny Schayes, and one-time Maccabiah Games coach, Dolph Schayes, came to embrace his Jewish identity, if not Jewish observance, in his post-playing days.

“As one of the NBA’s first superstars, Schayes never thought of himself as a Jewish basketball player, just a basketball player,” Grundman writes. “He … did not see his career as having some larger social meaning.” In 1977, Schayes accepted an invitation to coach the U.S. team in the Maccabiah Games. “Beginning in 1977, I grew up as a Jew,” he would say.

And Grundman tells how the NBA, all white at its founding, opened up to the blacks, who came to dominate the game; how it left small cities like Syracuse behind; how it shed the reputation of a low-salary sport that filled the winter months when baseball wasn’t played, and began to surpass baseball’s popularity in the hearts of most sports fans; and how it promoted its early superstars, like Schayes.

Besides the focus on Schayes, the best part of the book is a collection of mini-profiles of characters like Wilt Chamberlain and Bob Cousy, athletes who contributed to the NBA’s early popularity.

Ride On
A Persian Carpet

From its opening lines to its satisfying and surprising ending, “The Luminous Heart of Jonas S.” (Akashic Books, 2014) by Gina B. Nahai kept me at the edge of my seat, impatient to meet the next fabulous character in this rollicking, often moving mystery/family saga.

By turns hilariously funny and painfully sad, it is the story of the Soleymans, an Iranian-Jewish family, their odyssey across time and continents, and the importance of identity both within and outside community. In prose that mixes the magical realism of Gabriel Garcia Marquez with the hard-boiled, Los Angeles-based detective fiction of a Raymond Chandler, Nahai shuttles the reader back and forth between the ancient Jewish community of Persia/Iran and its modern-day re-establishment in Los Angeles after the overthrow of the Shah in 1979. Perceived as impossibly rich and “other,” the community includes not only emigres who managed to adapt and thrive in their new home, but also, as Nahai makes clear, many who did not and continue to eke out a silent poverty, their essence left behind in a country that rejected them.

The core of this chronicle focuses on the heredity and inheritance of the book’s anti-hero, Raphael’s Son (sic), whose cruelty and hatred of the family and community from which he and his mother were ruthlessly rejected in Iran, becomes a springboard for his subsequent success and revenge in America. An Iranian Madoff, he takes advantage of his newly made, if ill-gotten wealth to bilk the entire community, rich and poor, family and friends, alike. Portrayed as a man without conscience, familial solidarity or loyalty, he is restored to his humanity, only after his death.

The lives of the various and multi-faceted characters unfold gradually: Elizabeth, the mathematical prodigy who brings with her the redolence of the ocean; her husband, Aaron, ever-courteous, basically good but lacking the ability to love; the frightening Black Bitch of Bushehr, the mother of Raphael’s Son, who sets into motion a dreadful cycle of loss and death, only to be continually stymied in her attempts to instate her son as part of the family.

Nahai, author of “Moonlight on the Avenue of Faith,” “Caspian Sea” and other novels, knows first-hand the community she describes, and she depicts her characters with a loving if sometimes amused eye. This novel feels personal, which makes the story all the more compelling. This is a magic carpet ride you’ll want to take.