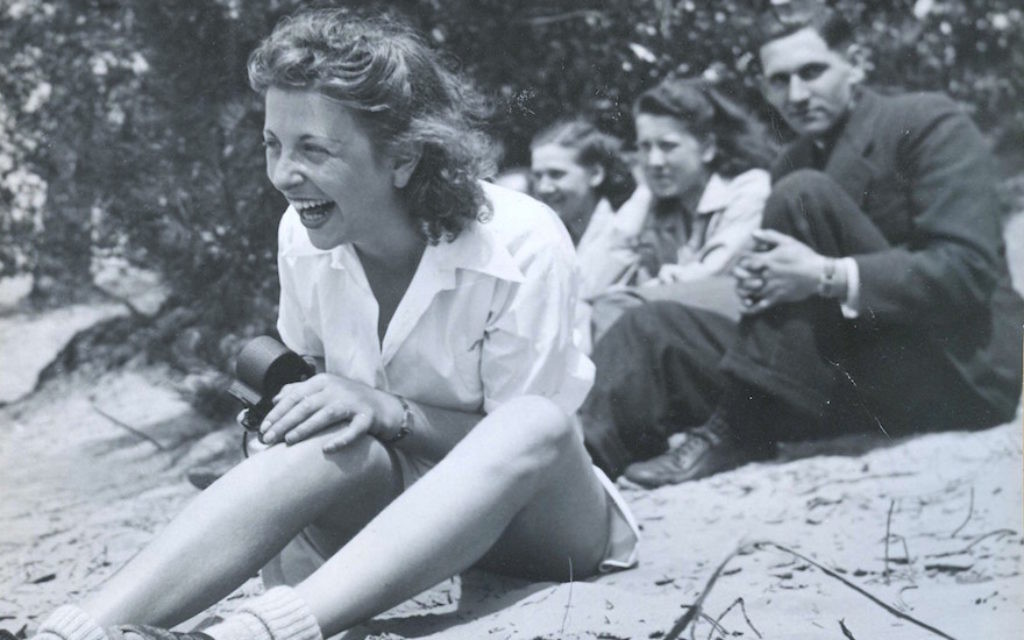 Even before Nazi racial laws turned her into a wanted person in her native Netherlands, Roosje Glaser had limited patience for rules.

A lighthearted and sometimes frivolous Jewish dance instructor who loved jazz music and the company of handsome men, Glaser ignored the 1940 Nazi takeover of Holland and the murderous anti-Semitism it brought. When she couldn’t ignore it, she mocked it.

An amateur photographer whose Aryan looks allowed her greater mobility than other Jews, Glaser not only flouted Nazi laws that forced Jews to wear yellow patches, but used to pose for photographs with unsuspecting German occupation soldiers next to cafe signs that read “no Jews allowed.”

Her flamboyant defiance eventually got Glaser sent to Auschwitz. But at the death camp, that same trait helped her survive as a dance instructor to the SS until she staged a clever escape. The remarkable life story of Roosje Glaser, who died in 2000, was only recently documented in a new biography about her written and published in Britain this year by her Dutch nephew.

“On the one hand, it seems that at times she didn’t understand the severity of her situation,” said Paul Glaser, the son of Roosje Glaser’s brother and author of “Dancing with the Enemy.” “On the other hand, she survived by seizing a series of opportunities that show she knew what she was doing.”

Roosje Glaser’s first act of defiance was to remove the letter J from her passport, which authorities stamped on the documents of Jews after the Nazi takeover, Paul Glaser said at a lecture he delivered about the biography at the Limmud FSU Jewish learning conference in Moscow earlier this year.

In violation of Nazi racial laws, Roosje Glaser continued to run her successful dance school. She even made it into the cinema reel in 1941, as part of a Nazi-era item that was meant to show that Amsterdam’s cultural scene was unhampered by the occupation. But her jealous ex-husband, who had turned into an ardent Nazi, informed the Nazis of her Jewish roots.

Summoned and marked by authorities, Glaser was unable to find a venue for the graduation ball of her dance class of 1942. So she had the graduation in a barn in the countryside. Pictures of her dancing with her students are the last taken of her as a free person before she was sent to Auschwitz.

Ignoring the summons, she stole another woman’s passport and moved to a different city, living under a false identity in a boarding house run by a German woman who was married to a Dutch Nazi. Then a former lover betrayed her to the authorities — this time for payment — and she was deported to Poland.

As a fluent speaker of German and accomplished administrator, Glaser landed a position as an assistant to a German officer at Auschwitz. But before she did, she underwent medical experiments that rendered her unable to bear children.

“She had charm and she spoke to the Germans like she was one of them, like a classmate. She lacked that victim mentality,” said Paul Glaser, who interviewed his aunt for the book close to her death and has spent the past 15 years gathering additional materials about her extraordinary life story.

Using what he called “natural charm,” Roosje Glaser began giving her German bosses dance lessons after hours, sometimes together with their girlfriends or the dreaded Aufsehrinnen – female guards. “By night she was giving dancing lessons to people whose day job it was to kill her and her people,” Glaser said.

In 1944, Roosje Glaser heard that the Swedish Red Cross was working out a deal to exchange Danish nationals at Auschwitz for three German prisoners of war captured by the allied forces. “So of course Roosje pretended to be Danish” to camp officials who didn’t know her to get on the list, Paul Glaser said.

At the refugee camp in Sweden, where she ended up after the exchange, Roosje Glaser began giving dancing lessons to other displaced persons like herself.

Feeling betrayed by the Dutch nation, she settled in Sweden until her death. She ignored Dutch officials’ requests that she report for inclusion in the post-war census and be repatriated to the Netherlands. Glaser fought to stay in Sweden, where she lived to her dying day.

Glaser’s brother, Paul Glaser’s father, who survived the Holocaust in hiding, never told his family about Roosje Glaser or about his Jewish roots. It was through a chance encounter with a person who turned out to be his second cousin that Paul Glaser learned the truth about his family and of his aunt’s existence.

“When I confronted my father about it, he admitted but asked me not to tell anyone about this story because sooner or later, he said, it would be used against all of us,” Glaser recalled.

It was a common reaction in a country where Nazis and their local collaborators killed 75 percent of the pre-Holocaust Jewish population of 140,000 – the highest death rate in occupied Western Europe.

Roosje Glaser and her brother had a tense relationship. Though they met a few times after the Holocaust, they fought each time. Her brother blamed her for the capture of their mother because of her flamboyant life style, which he thought drew attention to the rest of the family.

Glaser was at first reluctant to meet Paul Glaser when he tracked her down in Stockholm but eventually told him the whole story and shared a cache of photos from the war period.

“Thanks to her, I now feel Jewish, I took my place in the Jewish family, so to speak,” he said at Limmud FSU. “And though I was raised Christian, I now feel at home with you, or in Israel.”

In their talks, Roosje Glaser mentioned to Paul Glaser that she would like to be cremated and have her ashes scattered into the Northern Sea, which she had a view of from her Stockholm apartment.

After her death, Glaser fulfilled her last wish, even though doing so violated Swedish law on waste disposal.

“Unlike my aunt, I’m a pretty law-abiding guy,” he said. “But breaking the rules one last time with Roosje was too tempting.”