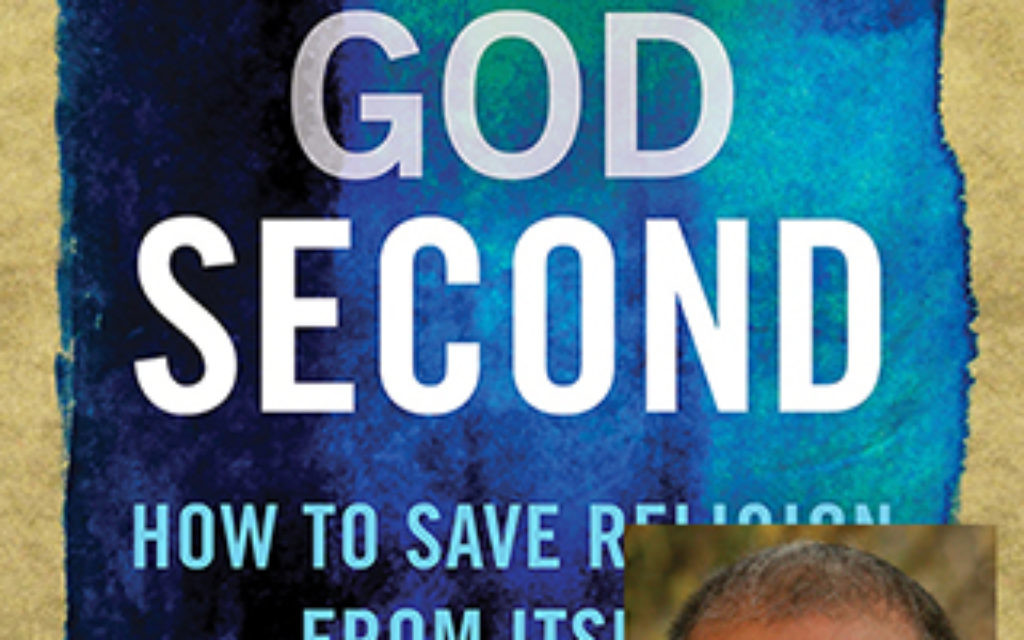 There is a bookshelf in my study that I have nicknamed “Amsterdam.”

On that shelf, you can find the following books: “God Is Not Great: How Religion Poisons Everything,” by the late Christopher Hitchens; “The God Delusion,” by Richard Dawkins; “Letter To a Christian Nation,” by Sam Harris; and “Breaking the Spell: Religion as a Natural Phenomenon,” by Daniel Dennett.

“Amsterdam” refers, of course, to the hometown of the quintessential Jewish freethinker, Baruch (Benedict) Spinoza. Those authors have earned a place on the “Amsterdam” shelf because they fall under the rubric of “popular atheism,” which was, for several years, a minor literary cottage industry.

I mention these authors because they provide some of the intellectual backdrop to “Putting God Second: How To Save Religion From Itself” (Beacon Press), the new book by Rabbi Donniel Hartman.

Rabbi Hartman is one of Judaism’s great educators and public intellectuals. He is the president of the Shalom Hartman Institute in Jerusalem, founded by his late father, the Modern Orthodox theologian and intellectual activist Rabbi David Hartman. (Full disclosure: For many years, I have participated in Hartman Institute programs).

In this book, Donniel Hartman poses a big question: If religion is so great, why does it so often fail to do its job of forming good people?

And why is this topic so important, precisely now? Because religion has come back — some would say, with a vengeance. Religion is at the center of regional and world conflicts. Rabbi Hartman examines contemporary religion as he would examine a medical patient. And he discovers that religion has an autoimmune disease.

What is the nature of this autoimmune disease?

First, God intoxication. As Rabbi Hartman sees it, too many people are so enraptured by God’s presence that they forget everything else — including other people and the ethical demands that are part of religious life.

God intoxication is God-induced indifference to anything that is not God. For Rabbi Hartman, the classic example of this is the binding of Isaac (Genesis 22). Abraham is so blinded by his devotion to God that he is willing to sacrifice his own son, and therefore his own future.

Rabbi Hartman tells the story of the chasidic master who criticizes a student so caught up in prayer at home that he fails to attend to his crying baby.

“If praying makes one deaf to the cries of a child, there is something flawed in the prayer,” the rebbe tells the young man.

Implicit in citing this story is a reference to charedim, those ultra-Orthodox Jews who have retreated into their own physical, intellectual, and spiritual ghettos, and who have essentially ignored the “crying baby” of contemporary Israel and modernity.

He could also be talking about devotees of ISIS, who will sacrifice children in the name of their murderous ideology.

Religion’s second critical flaw is God manipulation, which is what is happening when we force God “to serve the self-interests of the anointed, to the exclusion of all others, by using God in the service of our own interests, while simultaneously waving the banner of divine approval.”

This is God-sanctioned indifference — this time, to anyone who is not “us.”

Rabbi Hartman relates the Talmudic story of Rabbi Shimon ben Shetah (Jerusalem Talmud, Baba Metzia 2:5), who returned a lost jewel to an idolatrous gentile. In fact, biblical law requires that an Israelite return the property of only a fellow Israelite. This gesture, therefore, went above and beyond the strict limits of the law.

Here again, it appears Rabbi Hartman is making an implicit point. In this case that the State of Israel must also affirm the dignity of the “Other,”and must go beyond the mere demands of the law in doing so.

How does Donniel Hartman recommend that we overcome the twin temptations of God intoxication and God manipulation?

Remember the real role of religion, he writes, “[to be a] moral mentor, reminding, cajoling, exhorting, and at times threatening its adherents to check their self-interest and become people who see others, who cannot remain indifferent, and who define their religious identities as agents of moral good.”

This means that Jewish ethical behavior must be able to stand up to, and endure, external critique.

To illustrate this, Hartman reflects on the biblical teaching that if an Israelite owns an animal, and the animal does damage to the animal of a gentile, the Jew is not liable for that damage.

Outrageous, yes? That’s what a passage in the Talmud would have us believe, as well.

The Talmud (Baba Kama 38a) tells the following story: The Roman government once sent two commissioners to the Sages of Israel with a request to teach them Torah. The Sages complied, and the commissioners studied the Torah in its entirety.

Before returning to Rome, however, the commissioners left their Jewish teachers with a sharp comment and critique. “We have gone carefully through your Torah, and found it correct, with the exception of this point: why are Jews exempt from paying damages they cause idolaters, while the latter have maximum responsibility for any damage to Jewish property?”

Consider: The Romans serve as outside “auditors” of the Jewish tradition. They have a notion of the good and the ethical that does not derive from Judaism. The inclusion of this story in the Talmud shows that there were at least some ancient sages who thought that the Torah teaching was unethical.

What else, though, is Hartman saying?

He is speaking about the role of Israel in the world. He writes, “Do not cast all external critics as hostile enemies. If you do, you will lose a profound resource for moral self-renewal. To the contrary, actively cultivate the voices, and embrace the judgments, of outsiders who articulate an independent moral standard.”

Donniel Hartman does not shy away from the most difficult and mature questions of faith. His reasoned, yet passionate, discourse is exactly what many young Jews are seeking — a way to engage with Judaism, and not be forced to leave their critical faculties at the door of that engagement.

Jeffrey K. Salkin is the senior rabbi of Temple Solel in Hollywood, Fla., and the author or editor of ten books on Judaism and culture, published by Jewish Lights Publishing and the Jewish Publication Society. He blogs at jeffreysalkin.religionnews.com.