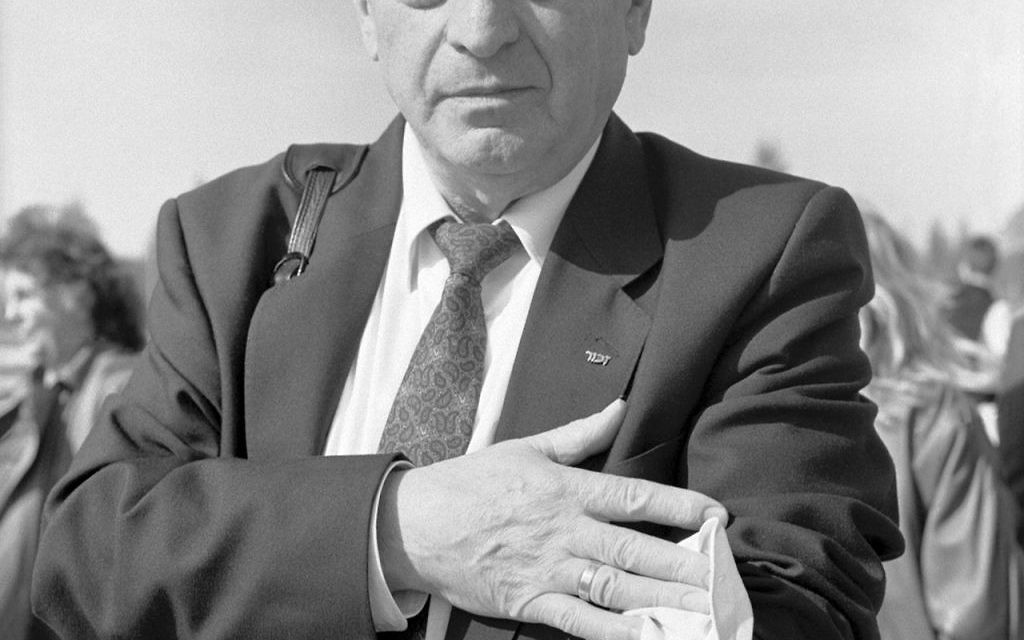 The idea of painting by number was born in the 1950s, when one could buy a set of paints that came boxed with outlined drawings, indicating which color belonged where. According to the Smithsonian Institution, which featured an exhibition dedicated to this art form in 2002, by 1954, paint by number had become a cultural phenomenon, and one critic wrote that there were more numbered paintings hanging in American homes than original works of art. And while some denigrated the pastime for its conformity, others celebrated the fact that here was a way for anyone to make art.

A few years ago, a New York gallery owner presented Laura Kruger, curator of the Hebrew Union College Museum, with a paint-by-number portrait of a Torah, from the 1950s.

“I started thinking about all the numbers in Judaism,” she told The Jewish Week in a walk-through of the new exhibition, “Paint by Numbers.” So she invited artists to submit pieces that related to numbers in biblical or halachic contexts, historical dates, holiday traditions, and the results were a numerical feast, from Larry S. Frankel’s “Kabbalah Bingo, the Winning Card,” a grid with numbers chosen for the years of patriarchs’ lives (175 for Abraham, 120 for Moses), the total number of mitzvot (613) and the total number of words in the Shema (248) to Carol Hamoy’s “Four Questions,” a mixed-media sculptural piece with new questions inscribed on four cups. Her fourth question: “And, what’s with all these natural disasters?”

Only one of the more than 50 artists seems to be painting inside the lines, as the exhibition title suggests, but these are his own lines and his own burst of color. Ed Baynard’s “3 Rocks” is a desert scene, suggesting the Jewish people’s 40 years of wandering. Below are three irregular stones, representing for him the idea of completeness.

“Numbering creates a scaffold of order and continuity,” Kruger writes in the exhibition catalog. “Everything we do and interface with is a number.”

The show is full of thoughtful approaches and original twists, like David Wander’s “Seven Fat Years, Seven Lean Years,” interpreting the story of Joseph when he is called upon to explain Pharaoh’s dream of seven healthy cows eaten by seven lean cows. A blue-faced Pharaoh sleeps at the bottom, with the cows of his dream above — cluster of healthy cows that are beautiful and melancholy.

Richard McBee’s “Ten Trials of Abraham” is a series of ten small paintings, each a scene in Abraham’s life based on midrash, depicted in the style of another painter, whether classical like Velasquez or contemporary like Kitaj. The ten paintings, in two vertical rows, represent doors, in a striking balance of color.

In “The Tribes of Israel,” Judy Sirota Rosenthal includes 15 long sticks she found in the woods, adding Dina, Joseph and Levi to the usual list of 12 tribes. Each stick, hanging on the wall, is adorned with silk threads and small objects. The striped area representing Joseph’s famous coat stands out.

“I like to raise questions in my work,” the artist said at the exhibition opening last Thursday.

The elegance of numbers is seen in “Concinnitas Project, 2015,” in which mathematicians and physicists transcribed their “most beautiful mathematical expression” freehand, producing a dance of numbers, white on black. Italian artist Tobia Rava, who has studied gematria and Kabbalah, uses Hebrew letters and numbers to create scenes such as his architectural setting in “Profezia del Mar Rosso.”

Several artists look at the Holocaust, whether imagining six million, or, in the case of Joyce Ellen Weinstein, making a powerful collage recalling a street address in Kovno where the residents were murdered. Each item in Judy Glickman Lauder’s black-and-white photograph of confiscated suitcases at Auschwitz, has a name and number in white. In Donald Woodman’s photograph, “Survivor: Max Mannheimer at Dachau,” the gentleman rolls up his sleeve to show the number tattooed on his arm.

That arm and his hands are linked to many other hands (five fingers, 14 joints) throughout the show, as symbols of strength and action. “Hands, other than voices, are the most communicative element of our selves,” Kruger explained.

Damon Davis shows hands of protest in his photograph “All Hands on Deck #1,” created in response to the 2014 brutal assaults in Ferguson, Missouri. In “Two Generations x Seven Emotions,” Trix Rosen shows a mother and daughter wrapping their arms seven times with their tefillin. As pointed out in the exhibition catalog, the number of bones in both hands has the numerical value for the Hebrew word koach, or strength.

There’s humor here, too: Archie Rand’s brightly colored “Hanukkah,” with eight candles lit on a menorah and a young girl with a dreidel atop her flying green hair. Suzy Matthews’s subtle “Barcoded” is a collage of ticket stubs, receipts and pharmacy labels.

The viewer is reminded again and again of how pervasive numbers are in Jewish tradition and in daily life, whether unlucky lottery tickets or the date that the Japanese artist Tetsuya Noda converted to Judaism. His wood block self-portrait, “Diary June 11, 1971,” features the beth din, or panel of three rabbis, that handled his conversion before he married the daughter of the Israeli ambassador to Japan.

Both Tobi Kahn and Jacqueline Nicholls present pieces related to the counting of the Omer, between Passover and Shavuot. Nicholls’s colorful lithograph features her stylized depiction of barley, while the angular and distinctive pegs in Kahn’s shining wooden sculpture are shifted to indicate the day “along the journey from slavery to redemption.”

In another piece by Sirota Rosenfeld suggesting the calendar, she illuminates the verse from Psalms 90 so appropriate to this time of year: “Teach us to number our days, so that we may attain a heart of wisdom.”

“Paint by Numbers” is on view at the Hebrew Union College – Jewish Institute of Religion Museum, One W. Fourth St., through June 30, 2017. Huc.edu.